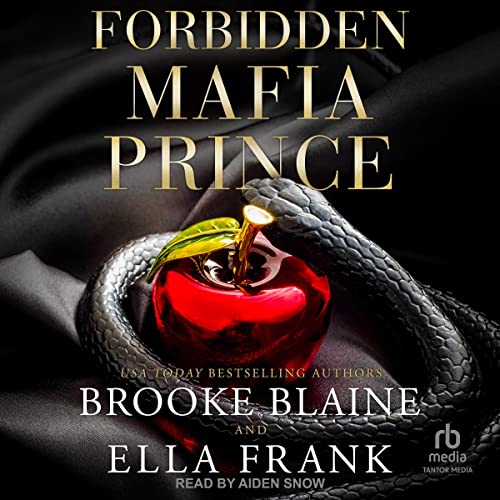 By: Ella Frank,Brooke Blaine
Narrated by: Aiden Snow
Try for £0.00

"What are you going to do with me?"

"Whatever the hell I want."

In Manhattan, tensions are rising. In a play for power, the Rossetti family has made a decisive blow, crippling their rivals—an act that has forced the Fiores to make a desperate move to maintain their supremacy. Many miles away, Luca Davis, a young medical student, has no idea his life is about to change. No idea that everything he's been told about his life has been a lie.

Enter Domenico Rossetti, the ruthless Mafia prince. Powerful and unforgiving, he's a savage in a suit—and the one who holds the cards when it comes to his new captive. But when the war escalates and both are forced into seclusion, the two men are faced with a new threat: the rising sexual tension between them.

You don't fall for the one person you're supposed to hate, but it's a temptation neither can resist. Because falling in love with the enemy isn't only wrong—it's forbidden. And the cost for defying everyone will be their lives.

Hmm ! How did these esteemed writers (creators of the fantastic The Elite Series) come to pen something so lack lustre? With a dry lack lustre performance by the usual excellent Aiden Snow/Caleb Dickinson? The Elite performed with Christian Fox allowed their characters to spar dramatically and with enjoyable amusing banter allowing the MM relationship to sparkle. Here the single narrator was just monotone and uncharasmatic. The violence, and interractions by two equally unlikeable MCs plus the potential cannibal "Chef" make the tale very sour. There was little background and backstory to formulate our impression of how these men got to be the MCs of this tale. I am not inclined to get Book 2. It's just not that interesting or engaging. Almost 6 hours I will never get back.

By comparison If The Seas Catch Fire by L A Witt (on Audible) fantastically performed by Michael Ferraiuolo shows us the different sides of mafia life where another Domenico comes to terms with the cards dealt in his life. This is an excellent tearjerking fully fledged drama, which I would recommend to anyone who has found themselves reading my review and is seeking a real in depth tale to get their teeth into.

Aiden Snow narrates the excellent: Luca: A Mafia Romance by Sarah Castille (on Audible). An indepth dramatic expose of passion at it's best which I would also recommend.

I lissend to this book in one go. I think that says it all.

I read the book a while back and really enjoyed it so when I saw it on Audible I had to buy it!
Great narration made it even better and I highly recommend this book,my only complaint is that book 2 isn't available on audio yet and this one ends on a massive cliffhanger 😒

These two story was a lot of fun to read. Was looking forward to listening to it. Love Aiden Snow voice. I was trying to put off pulling this first book in until the 2nd one released. Dang it couldn’t wait. Loving this so far. Looking forward to the next one to release.

I’m so glad I bought this one! Had me on the edge of my seat. Definitely steamy if a little unconventional. Maybe a touch of Stockholm syndrome but the writers do a great job of developing the characters and story. Couldn’t stand Dom throughout most of the book but by the end I think he started to grow on me. I will definitely be reading the next one. Hopefully we can get the audio soon as the narrator is awesome!

I just need to know when is the rest coming. I normally don’t read a series until all books are a available. This was so good and I know it’s only going to get spicier.

Great book, kept my attention all the way to the end, amazing audio delivery, loved it. Will be reading again, every chapter was received amazingly do recommend you give it a read.

Dark , Compelling and Sexy ! Storytelling at its best!!
This book is incredible and engaging!
Dom and Luca's steam is off the charts !

I loved this book and I love the audio version even more.
The characters are well developed and on the surface are, night and day. Once their attraction for one another boils over they are a yin to the other's yang. There is just one problem, Dom (second in command for the Rosetti family)was ordered to kidnap Luca (the heir to the Fiores crime family).
The story has twists and turns you don't expect and ends with me wanting the next story now!
Aiden Snow does a wonderful job of narrating the story and makes it a sexy listen.
It's worth the credit!