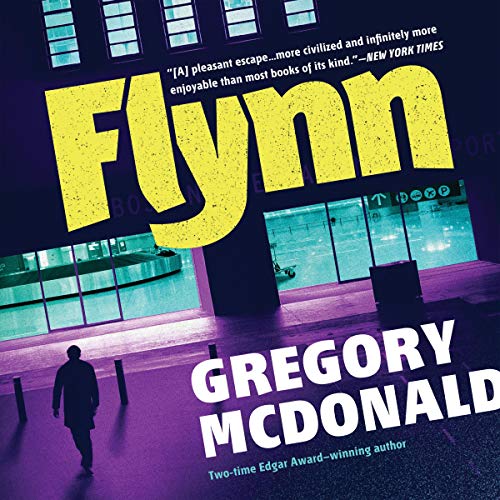 By: Gregory Mcdonald
Narrated by: Donald Corren
Try for £0.00

Early one morning as Boston's only investigator is returning home from solving another peculiar case, he has the displeasure of witnessing a spectacularly horrible show outside his front door: a massive aircraft, carrying over one hundred souls, exploding in midair over the harbor. Almost immediately, the Human Surplus League takes credit for the heinous act of terrorism. But "Reluctant Flynn" isn't so easily convinced, unlike his partner and governmental counterparts.

Now finding himself at the whim of the tedious and ill-mannered FBI agents as they follow bunk leads and question all the wrong suspects, he decides to do his own digging, employing family and encountering new friends and old acquaintances along the way. As the truth begins to trickle forth, Flynn finds himself staring down a much bigger - and much deadlier - problem.

What listeners say about Flynn

A terrific intro to the characters with an intriguing story - all with an undercurrent of humour.

Mcdonald at his best

Loved this reading of a great story. The deadpan McDonald humour shines throughout the story.

A great find in the audible plus catalogue. Would have got 5 stars easily, but I felt the crime being investigated was out of proportion to the levity of the dialogue. That's just me, I'm sure many others will enjoy it without even that small reservation.

Good concept and main character but filled out with too much nonsense, particularly the son’s.

There is too much blasphemy to enjoy the book. I will not be reading anymore of his books because of the blasphemy.

A fantastic narration of a great book. Even if you have had the entire Flynn series in paperback for years and reread them until you know the stories by heart, Donald Corren's narration makes getting the audible versions worth it. Super enjoyable portrayal of Flynn.

What a fun listen!!

I had no idea what I was getting into when I stumbled upon this listen but what a wonderful story!!!

Flynn is fascinating, like seriously, just an incredible character. He's a detective, of sorts, and is easily the smartest person in the room. He witnesses a plane crash and the fun ensues. (I know that's a weird sentence but that's exactly what happened.)

I loved the narrator. There is a twinkle in the eye of the Flynn character and the narrator delivered on that. The next book should be something special.

Delivery was a little wooden; not at all what I imagined when I read the book the first time. But the series has always been a favorite. Quick wit and deft storytelling has always been the author's forte. Definitely worth the time.

I really enjoyed this book. The story was interesting but you have to pay close attention. I wasn't and had to go back and listen to the last couple of chapters again. I loved the humor and the characters. Flynn is a great character.

Fun book with a lot of enjoyable twists, but I thought the story is a little too convoluted.

Went back and dug out this old book. I wanted to do a mystery and laugh a bit, too.
Love Flynn just as much as the first time I read it

Introduced in the second Fletch novel, Flynn comes into his own with this novel bearing his name. As the only inspector on the Boston Police force, Flynn definitely has his on style for investigating crime. When a passenger plane crashes in the Boston Harbor, Flynn joins up with the FBI to determine what happened. Being Mr. unorthodox, it does not take long for Flynn to inject his own style of investigating including using family members.

This first entry in the Flynn series is a different sort of mystery genre with a touch of dark humor thrown in. Donald Corren does a first class job with the narration and keeps the pace flowing. As a Plus Catalogue entry, it hard to find fault with this interesting listen. I am sure to add the next in the series to my library.

Listening to novels written when you had to find a phone both & look things up , is relaxing as you can get. I found myself laughing out loud to this out!

Flynn is great character and narrator was excellent, but windup of the mystery stretches credulity. Nor is enough backstory given to be convincing as to how Flynn has the contacts and connections that are central to the plot.