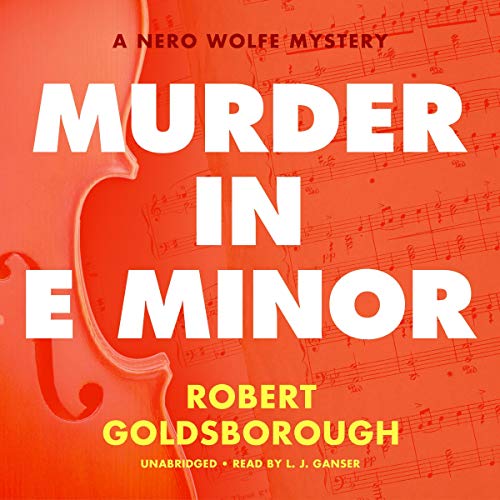 Iconic sleuth Nero Wolfe returns to track down the murderer of a New York Symphony Orchestra conductor in this Nero Award-winning mystery.

Ever since disgraced associate Orrie Cather’s suicide, armchair detective Nero Wolfe has relished retirement in his Manhattan brownstone on West 35th Street. Two years after Cather’s death, only a visit from Maria Radovich - and the urging of Wolfe’s prize assistant, Archie Goodwin - could draw the eccentric and reclusive genius back into business. Maria’s uncle, New York Symphony Orchestra conductor Milan Stevens, formerly known as Milos Stefanovic, spent his youth alongside Wolfe as a fellow freedom fighter in the mountains of Montenegro. And now that the maestro has been receiving death threats, Wolfe can’t turn his back on the compatriot who once saved his life.

Though her uncle has dismissed the menacing letters, Maria fears they’re more than the work of a harmless crank. But before Wolfe can attack the case, Stevens is murdered. The accused is the orchestra’s lead violinist, whose intimate relationship with Maria hit more than a few sour notes in her uncle’s professional circle. But Wolfe knows that when it comes to murder, nothing is so simple - especially when there are so many suspects, from newspaper critics and ex-lovers to an assortment of shady musicians.

Now, in this award-winning novel that carries on the great tradition of Rex Stout, the irascible and immovable Nero Wolfe is back in the game, listening for clues and ready to go to war to find a killer.

What listeners say about Murder in E Minor

Easy listening, nice characters, gentle mystery plot - exactly the sort of audiobook to pass a relaxed afternoon ironing. Recommended if that's what you're in the market for

Indistinguishable From the Rex Stout originals.

Mr. Goldsborough is able to find the exact atmosphere the original books were written. It is a book you can finish in one listening.

interesting, wish I'd read it before seeing films,

worth listening to, once I realised films set in different time, rest the same

Awful, even when free

Most likely t storey may be okay but I could t actually hear it or concentrate past the awful narration. It’s like listening to auto generated captions. I tried 4 times and that doesn’t include all of the rewinds.
Honestly don’t bother.

Thought I would try this series but it didn’t appeal. The characters are drawn without depth and the plot simple.

Something to bring my memories back.

I've been reading Nero Wolfe books since I was a teenager (I'm retired now) and I was very sad when, many years ago, I read the last one. I had severe doubts about someone else writing about him, as I've read some of these alternative authors before, and most have been very disappointing.

Robert Goldsborough however does not fall into the disappointment catagory, and I really enjoyed listening to this book. I'm looking forward to listening to another in the near future.

I’ve heard of Nero Wolfe, but not ever read a NW novel, reading largely only Poirot, Marples, Holmes, Silver, Hemingway, Hannasyde, Wimsey, et al… so to come across the American version of my favourite English genre, in a 20th century setting, was intriguing. I know that this isn’t the original author, but this chance to listen for free as part of the Audible membership was too good to miss.

I have nothing to compare it to, so could just enjoy it for what it is. I really DID enjoy it, this is a great (re)introduction to Mr Wolfe, giving an introduction as to how he was known to work, investigate, live, eat and ‘socialise’. I really like Archie and the other supporting characters whom I dare say I shall encounter in the series.

This was fabulously narrated by L. J. Ganser - I look forward to enjoying the rest of the series!

"Hatred has become your handmaiden."

I have been a fan, and read all, of the Nero Wolfe books by Rex Stout, and mostly disliking the trend of continuing tales of established characters by more modern authors, was not expecting much of this, the first in series by Robert Goldsborough. So it was with delight that I found that the author has (almost) succeeded in his capturing the essence of the originals living in the old brownstone - Wolfe himself, orchid loving and huge in both stature and intellect, Archie, his hard working, breezy and equally bright assistant, and Fritz, the chef who fuels them both. The story was also well in keeping with those which had gone before, the protagonists also: sufficiently developed to become part of the moving picture that was the mystery.

Narration by L.J.Gaster was excellent, with just the right lightness of touch, great pacing and spacing with differentiated and appropriate voicings for each character and especially for Archie, who tells the story. That of Nero Wolfe himself was not quite the one I had in my own head but was perfectly acceptable: how difficult it must be to be a voice actor bringing to life a well loved character. Ganster's performance was superb.
So, almost, but not quite, perfect Nero Wolfe. However, it was also very enjoyable in it's own right. So, five stars, and my thanks to Audible for making this book freely available through the Audible Plus programme.

This is quite like Rex Stout's Nero Wolfe, which is just how I hoped it would be.

This is the first book in this series. I'm trying new series. This is one that got my attention. Wolfe and his helper Archie is the best in their business. They are trying to solve a murder of a guy in the Orchestra. There is a number of people that could have done it. L.J. Gasner did a great job narrating this book. He is new to me. I like his voice in this series. If my review is any help will you please click on the helpful link below. Thank you

Sadly, the turn to Political bashing of “the right wing” continues.

If The writer has decided to take on a new career of political propaganda rather than delightful mystery writing, this will end my interest in the Nero Wolfe series.

Overall, pretty good. Old friends are back and the author stays true to the original characters.

The narration is competent although I wish Nero had an accent. But then again, no accent is better than a poorly done one.

Not worth a credit, Plus Catalog makes its okay

This review is more on the series than the book itself, just info to determine if you want to invest yourself in these characters and series.

If you are looking for a very captivating storyline with lots of twists and turns, then this series probably is not for you.

If you are just looking for an easy listen while you are on your daily commute and don’t mind some series timeline issues of having stories set in prohibition and advent of personal computers, then this series is for you.

My ADHD sometimes makes my mind wonder away from the story but when refocusing, I was still able to follow storyline without needing to go back. I think the narrator’s energy helps makes up for the some of the flaws in the storyline.

The only reason I stuck with the series because many of the books were included in the Audible Plus Catalog and I liked the narrator. However, I would not spend a credit on any of these books.

While I thought the story and narration were good I never quite forgot they were not original. It is somewhat like having a fake designer purse. Just when you tart to tell yourself it is as good as the original you notice it does not quite match up at the seams. I did thoroughly enjoy the story and the narration. The voice feels a little immature for the age (less)ness of the characters. But enjoyable none the less Also, as there will never be anymore Rex stout additions this will do quite nicely.

no seriously this is no Rex Stout Nero Wolfe story. I was bored put of my mind listening while gardening.

Good plot twist. Nice storyline. Enjoyable. The reader was very good. I will listen to other books in the series.

Wonderful continuation of the Stout legacy.

I am afraid I went unaware of Goldsborough‘s continuation of this series until audible put these available for free with the gold membership. These audio versions are extremely well performed and produced. The story is well written and truly a Nero Wolfe mystery.