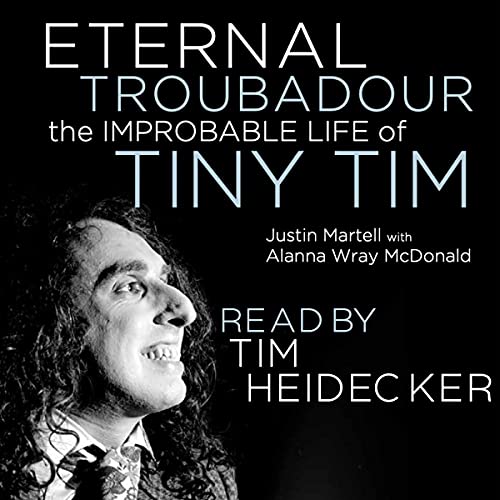 By: Justin Martell
Narrated by: Tim Heidecker
Try for £0.00

As Bing Crosby once put it, the rise of Tiny Tim represents "one of the most phenomenal success stories in show business". In 1968, after years of playing dive bars and lesbian cabarets on the Greenwich Village scene, rubbing shoulders with the likes of Bob Dylan and Lenny Bruce, the falsetto-voiced, ukulele-playing Tiny Tim landed a recording contract with Frank Sinatra’s Reprise label and an appearance on NBC’s Laugh-In. The resulting album, God Bless Tiny Tim, and its single, "Tip-Toe Thru the Tulips with Me", catapulted him to the highest levels of fame.

Soon, Tiny was playing to huge audiences in the USA and Europe, while his marriage to the 17-year-old "Miss" Vicki was broadcast on The Tonight Show in front of an audience of fifty million. Before long, however, his star began to fade. Miss Vicki left him, his earnings evaporated, and the mainstream turned its back on him. He would spend the rest of his life trying to revive his career, with many of his attempts taking a turn toward the absurd.

While he is often characterized as an oddball curio, Tiny Tim was a master interpreter of early American popular song, and his story is one of Shakespearean tragedy framed around a bizarre yet lovable public persona. Drawing on more than a hundred interviews with family, friends, and associates, plus access to Tiny’s diaries, which have never before been made public, Eternal Troubadour tells the incredible true story of one of the most fascinating yet misunderstood figures in the history of popular music.

With a foreword by Harry Stein.

What listeners say about Eternal Troubadour

Found this book charming and bizarre in equal measures - there is so much detail here - having poured over Tiny's diaries - the author has left nothing out. Comedian Tim Heidecker seems an unlikely choice for narrator, but does a 'great Job' - although I lost count of the times I heard him read "...causing Tiny to ejaculate in his pants" - which gives you a general idea of just how personal this biography goes.

A tender and well researched retrospective look back on the career and personal life of Tiny Tim. Well worth it. Tim did a great job with the narration.

I had an unused Audible credit, and saw a social media post from a friend, suggesting that this was an interesting book. Seeing Tim Heidecker as the narrator had me even more curious.

I knew very little about Tiny Tim's life, and I typically enjoy biographies about interesting people. However, this one wasn't my bag.

I found the recounting of Tiny's youth and formative years to be interesting - but the vastness of details surrounding his many recording sessions, TV appearances, and various live performances to be so complete in their minutiae, that I became a bit bored with it all. It wasn't until later chapters that I gave in to the urge to skip ahead to the last two.

The most difficult thing to address in my review is the narration. I adore Tim Heidecker, so I found myself wondering if he, too, was as bored or tired of reading this book as I was of listening to it.

I was concerned that maybe he took on the project without getting a word count, or that he was coerced in some way to do it. I tried recording two audiobooks years ago and failed - because it is a difficult thing to perform for 20-30 hours with consistent energy and pace. I do not fault Mr. Heidecker for giving it a go.

At the same time, as a voice talent who doesn't record audiobooks because of their length, I couldn't help but root for Heidecker as he seemed to lose steam through later chapters. Edits became more apparent, pacing was staccato at times, and if there was any passion about the material, it felt scant in the middle chapters.

On positive notes, the book gives you a very good sense for Tiny Tim's authenticity, his unusual habits, and his passion. It speaks volumes to the value of journaling, so that years after one is gone, your story can be told.

It is a biography written as if Mr Martell was with Tiny everyday of his life.
I messaged the author asking how he came about such detailed information and he replied that the collection of information took around 15 years to compile.
It is a story of a man whom many would consider odd and yet a brilliant person. A must read for Tiny Tim fans and for those who enjoy reading about those who are unique.