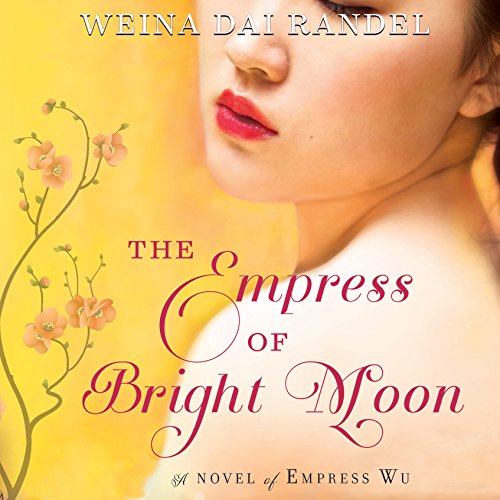 There is no easy path for a woman aspiring to power.

A concubine at the palace learns quickly that there are many ways to capture the emperor's attention. Many paint their faces white and style their hair attractively, hoping to lure in the One Above All with their beauty. Some present him with fantastic gifts, such as jade pendants and scrolls of calligraphy, while others rely on their knowledge of seduction to draw his interest. Young Mei knows nothing of these womanly arts, yet she will give the emperor a gift he can never forget.

Mei's intelligence and curiosity, the same traits that make her an outcast among the other concubines, impress the emperor. But just as she is in a position to seduce the most powerful man in China, divided loyalties split the palace in two, culminating in a perilous battle that Mei can only hope to survive.

In the breakthrough first volume in the Empress of Bright Moon duology, Weina Dai Randel paints a vibrant portrait of ancient China - where love, ambition, and loyalty can spell life or death - and the woman who came to rule it all.

What listeners say about Empress of Bright Moon

this is one of the best series I have listened 2 on Audible. Emily's performance is incredible, she makes the listener feel all of the emotion of the novel. She makes the listener feel the pain, the suspense, and she acted every single sentence with all of her soul. This is one of the most beautiful and incredible series I've ever read. And the best part, is it is very true to the actual history of Empress Wu. the love story is palpable, but Tastefully done. I couldn't stop listening to this book. The only problem, is it was so powerful and moving, I cannot move on. usually, I end one audible book and start another. However it is been two days since I finished this book and I cannot move forward. I may have to listen to the series again. This may be one of the best series I've ever read in my entire life.

better than the first book!

i like the storyline and the epilogue. I felt the performer did a better job of emotional range than she did in the first book. It's also refreshing that it isn't constant drama. I prefer books to have both peaceful and dramatic elements in them; this book does well in that respect.

Much better than the first book

If like me you didn't like the first book because of "all that happens to me happens for a reason and there is nothing I can do about it" attitude of May and weak story, the second book will not disappoint you.

Ancient China has nothing on GOT!

This book is filled with romance, deception, excitement, and just a taste of life in the AD 600s

very interesting about the Chinese dynasties

I learned a lot about the Chinese dynasties that existed BC and then AD very interesting definitely recommend this series.

The Empress herself would’ve liked to edit

Albeit a moderate engaging story, it is likely going to make unbiased historians or Wu Tse-Tien herself cringe. As the only woman who ruled as “di” (royal supreme ruler of the dynasty) in all of China’s history, she had an iron will and unprecedented political skills to navigate her success in a male dominated society. The author and narrator painted her as this strategy-less, love-sick, tantrum throwing, tearful weakling with occasional hapless or mildly successful endeavors just made the story unbelievable.

Sooo good. I was immersed in this series. I'm not a history buff so I can't attest to the accuracy of the story, but this seems to be pretty legit historical fiction.

Glad I gave it a second chance.

I almost didn’t listen to this book because of the narrator and my experience with the first book in this series. I’m glad I gave it a shot. The story was good and the narrator did a better job.

Way too much angst

No struggle listening to this wonderful story! It just compelled me to binge..a great tale of life, a quest to be in the palace, the struggles, defeats, ultimate victory in both royal success and love. It's a beautiful story, and enjoyable from start to finish!