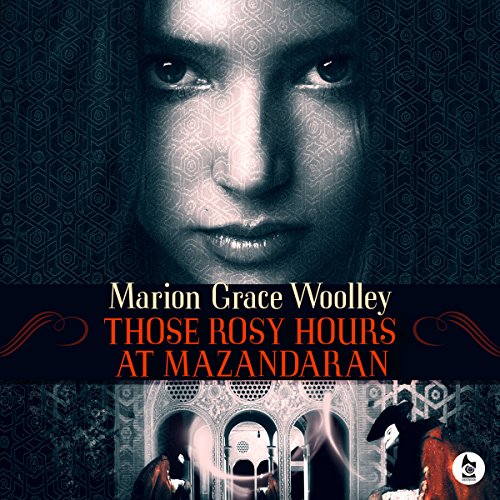 Those Rosy Hours at Mazandaran

By: Marion Grace Woolley
Narrated by: Emma Newman
Try for £0.00

A young woman confronts her own dark desires and finds her match in a masked conjurer turned assassin. Inspired by Gaston LeRoux's The Phantom of the Opera, Marion Grace Woolley takes us on forbidden adventures through a time that has been written out of history books.

"Those days are buried beneath the mists of time. I was the first, you see. The very first daughter. There would be many like me to come. Svelte little figures, each with saffron skin and wide, dark eyes. Every one possessing a voice like honey, able to twist the santur strings of our father's heart."

It begins with a rumor, an exciting whisper. Anything to break the tedium of the harem for the shah's eldest daughter. People speak of a man with a face so vile, it would make a hangman faint, but a voice as sweet as an angel's kiss. A master of illusion and stealth. A masked performer known only as Vachon. For once the truth will outshine the tales. On her birthday the shah gifts his eldest daughter, Afsar, a circus. With the circus comes a man who will change everything.

What listeners say about Those Rosy Hours at Mazandaran

This novel delivered far beyond my expectations. It's a beautiful and very dark tale inspired by The Phantom of the Opera but stands on its own as an intriguing story. The story draws you in and there are surprises right up to the end.

Emma Newman does a wonderful job performing this novel.

Disclosure: I received a free download of this Audible book from the publisher. In spite of that, the views expressed here are my own & I did not commit to posting a review for the download.

I started out on this story thinking it would be a boring romance novel (honestly) but it is amazing. Dreamlike, mysterious, romantic, dark, horrific and terrifying. I totally love it and think everyone should read it. Just fabulous.

This was such a surprise. I was expecting a run of the mill YA tale of a Persian princess' adventures. This was so much more than that. It's an intimate look at power from an unexpected angle, betrayal from below, and how servitude twists the appetite.

I highly recommend. Be prepared to be surprised. All the way through.