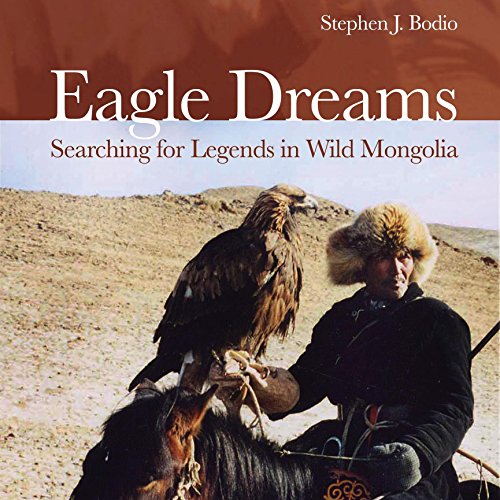 By: Stephen J. Bodio
Narrated by: Raymond Scully
Try for £0.00

When Stephen Bodio was a young boy in the early '50s, he saw an image in National Geographic that became forever etched in his mind: It was a photograph of a Kazakh nomad, dressed in a long coat and wearing a fur hat, holding a huge tame eagle on his fist. And a lifelong fascination with Central Asia was born.

Mongolia, a vast country located between Siberia and China and little known to outsiders, was long under Soviet domination and inaccessible to Westerners. When it became independent in 1990, Bodio began planning a pilgrimage to see if the eagle hunters of "The Picture" had survived. A lifelong falconer himself, he longed to visit the birthplace of falconry and observe the traditions that had survived intact through the ages. His fantasy was realized when he traveled independently twice to the westernmost region of Mongolia and spent months with the people and birds of his dreams. The ancient rituals of hunting with eagles are fascinating, and the remarkable relationships these nomadic people have with their birds of prey are thrilling.

With vivid prose and humor, Bodio gives life to his dreams and the people, landscapes, and animals of Mongolia that have become part of his soul.

What listeners say about Eagle Dreams

I really enjoyed this throughly fascinating tale of one man's obsession with eagles, falconry, Mongolia and travel. Bodio's writing is wonderfully engaging, upbeat and evocative. He is able to put words to experiences and flesh out a culture very different from the usual American life. What's more, his enthusiasm is absolutely infectious. Be prepared to be swept away. However, be forewarned--this is a book about hunting and fierce predators.

I have been lucky enough to have traveled the Silk Road in Central Asia, walked and experienced the great expanse of the Steppe and spent time in a ger or yurt first hand. Listening to this book brought back those memories and the whole book rang clear and true for me. So, whether you are just looking for an armchair adventure or a reason to get on a plane I can recommend this book as a portal into another world. Fantastic!

I mistakenly thought this book was about falconry. Instead this book is written as a prelude to serial killers. The disgusting graphic details given about the killing and mutilation of animals was not only too much,but was also unnecessary to tell this story. Come on mr. bodio
{ purposely written in lowercase } every paragraph describing so much carnage is way too much. Even if this was how the people in your story survived there was no reason for all the details. You have the audacity to call yourself a falconer, I hate to see how your birds of prey are treated……absolutely disgusting…

Very interesting regarding hunting with eagles, the people of this unique culture, the landscape, and the modes and difficulties of travel. T h e narrator's voice did not seem to fit this rugged and austere setting, and had a style more suited to a teen or even younger audience.