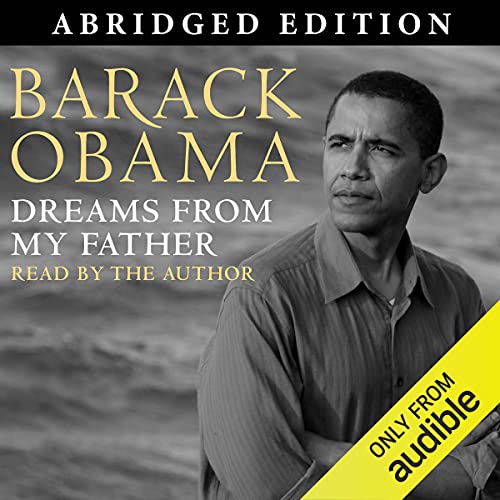 Dreams from My Father

Obama reads his own story, in this abridged edition of his number one best seller. The unabridged edition, newly recorded by Barack Obama, will be available from fifth October 2021 only on Audible.

An international best seller which has sold over a million copies in the UK, Dreams from My Father is a refreshing, revealing portrait of a young man asking big questions about identity and belonging.

The son of a Black African father and a white American mother, Obama was only two years old when his father walked out on the family. Many years later, he receives a phone call from Nairobi: his father is dead. This sudden news inspires an emotional odyssey for Obama, determined to learn the truth of his father's life and reconcile his divided inheritance.

Written at the age of 33, nearly 15 years before becoming president, Dreams from My Father is an unforgettable listen. It illuminates not only Obama's journey, but also our universal desire to understand our history and what makes us who we are.

"This may be the best-written memoir ever produced by an American politician." (Joe Klein,  Time magazine)

"Extraordinary...truly moving...Obama is a born narrator, with a mastery of colour, scene and personality." (Simon Jenkins, Sunday Times)

What listeners say about Dreams from My Father

I will recommend this work and I have done so several times because it gives a totally enlightening background to a man that I already hold in high esteem. Read by the author and man himself in a clear and entertaining way this book is a pleasure to have in my Audible library. Bringing to the fore lots about Barack that I previously did not know (probably due to being a Brit rather than a USAnian) and making me want to know more still. A soothing voice, an inspiring man and a stirring story make this one of my favourite Non Fiction Audible works.

president Obama is great author and narrator too it's story anyone with challenging life upbringing will relate as well as offer comfort and hope provide that one is willing to strive!

DREAMS OF MY FATHER

BARRACK OBAMA READS THIS STORY WITH STRENGTH AND TRUE BELIEF. ONCE STARTED I ONLY STOPPED THIS STORY WHEN I WAS TRULY TIRED AND READY FOR BED !!

brimming with optimism while taking a clear eyed look at family relationships. the bonus speech at the end is great too.

A rich and reflective early autobiography

A remarkable story, surprisingly subtle and undoubtedly benefiting from the fact it was written in the days before his political fame.

Fills in some of POTUS backstory

Wanted to hear this after Michele’s book because she discusses how it came to be written. A tad fast reading style for me but a good story about POTUS family outside of USA. So sad what happened next when Barack stepped down so it was therapeutic to hear his melodic voice again.

Not a book I would have usually chosen, but I am so pleased I did. I loved the narration by Barack and found his story inspiring. It gives Barack a human side I had never known.

Overall I enjoyed the book. I could listen to Barack Obama speak all day and never get bored, he has one of the most iconic sounding voices in the world so this was always going to be a first class reading from him. Sadly though, I'm mixed about the book. I struggle to see how the parts regarding is young childhood weren't embellished unless he has an exceptionally photographic memory. A lot of the book feels like a work of fiction writing wrapped around truth where artistic license has been used to make each sentence more decorative. That said, some really great highlights in there and learning and understanding the multi-cultural and multi-national background and history and the backdrop of morality to one of history's most notable politicians in a time before he made that history is beautiful. It is not difficult to see why he was destined for the top when you consider the depth of character and intelligence he has. This body of work, more than anything to me highlights why so many adore him. If you are a Black American, he is you. If you are a White American, he is you. If you are African, he is you. If you are Christian, he is you. If you are Muslim, he is you. He holds a part of so many people in him and brings it together so well. He is not one thing but many things and in the humanity (not the politics) he inspires me and this book only served to increase that.

I loved the fact that this was read by Barack.
It gave me a clear insight into the man and his childhood, and how they came to shape the person that he is today.
I loved this book, I cannot recommend it enough.

Loved it sorry when it came to an end.
Very interesting, possibly a bit sentimental but still very enjoyable

I read the book, and then for a college course I was assigned the book again. This time I choose to listen to the audio version and I was not disappointed. This story comes to life in Barack's voice and I thoroughly enjoyed the experience.

The real and rawness of this book brought me to tears excellent read!!! Such a real story nothing like one could have imagined or expected.