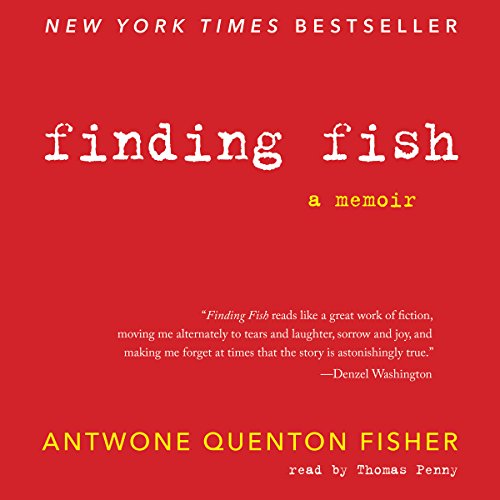 By: Antwone Q. Fisher
Narrated by: Thomas Penny
Try for £0.00

Baby Boy Fisher was raised in institutions from the moment of his birth in prison to a single mother. He ultimately came to live with a foster family, where he endured near-constant verbal and physical abuse. In his midteens he escaped and enlisted in the navy, where he became a man of the world, raised by the family he created for himself.

Finding Fish shows how, out of this unlikely mix of deprivation and hope, an artist was born - first as the child who painted the feelings his words dared not speak, then as a poet and storyteller who would eventually become one of Hollywood's most sought-after screenwriters.

A tumultuous and ultimately gratifying tale of self-discovery written in Fisher's gritty yet melodic literary voice, Finding Fish is an unforgettable listening experience.

What listeners say about Finding Fish

This book will not disappoint you.

I've requested that Audible obtain the rights to the unabridged version of this book over two years ago. I was so glad to see that my request finally came to fruition. I wish there is a way that Audible could notify someone that their request had been fulfilled. Anyway, this audio-book is a gem! When I first listened to it over 5 years ago, I was completely enthralled by Mr Fisher's story that I couldn't stop listening to it. Since then, I have suggested this book to many of my friends. If you like a good memoir, this one will not disappoint!
The story of Antwone Quentin Fisher is one of cruelty, submission, mental fortitude, self realization, and accomplishment. His story will leave you gasping in horror and exclaiming in excitement as his story is told. In the end, an interview with the author himself makes you feel as if an old friend that has returned home since you know of and understand his most darkest secrets. His telling of coming of age while in the Navy was spot on. I too had an experience in the Navy where I transformed from boyhood into manhood.
Don't be fooled by thinking that because you may have seen the movie, you know the whole story. The screenplay is just that; made for Hollywood. This book is raw emotion.
I highly recommend it. Enjoy,

This was such an inspirational & wonderful book! What an incredible testimony! Thank you so much for sharing your story with us... You are amazing!!

Mr. Penny really brought this story to life. He actually sang some of the parts that required singing. And he was on key! He got down the characters as well! His timing and variation in tone during certain scenes remains unmatched, in my opinion! 11/10 from me!

Totally different than the movie

I hesitated on buying this book because I thought it would just be a retell of the same story from the movie. I’m glad I tried it out anyway. This book was so well told and captured so much that was not a part of the movie. As a matter of fact, there are probably only a handful of similarities between the book and movie except for the characters. This was a wonderful book. Highly recommended.

Thank you Antwone Quentin Fisher for providing me with so much insight and validation.

The trauma and abuse he suffered as a child and still managed to build such a constructive, happy life. It’s amazing. Impressive. Great story. Narrator/reader delivers and excellent performance as well.

An excellent memoir with so much sorrow, poverty, abuse, tragedy, betrayal, sadness, loss, horror, hopelessness, and being lost, that due to perseverance, imagination, and determination led to being found, finding an identity, discipline, hope, joy, peace, happiness, success, love, kindness, marriage, and fame. A true ashes to riches of the many layers of life of an African American boy as a ward of the state to a genuinely successful man.