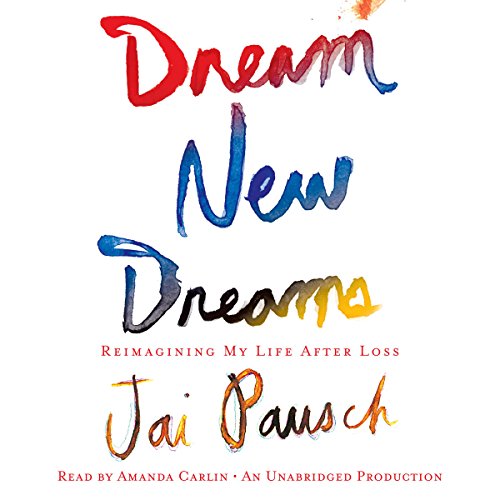 By: Jai Pausch
Narrated by: Amanda Carlin
Try for £0.00

"Jai is such a giver that she often forgets to take care of herself," Randy Pausch wrote about his wife. "Jai knows that she'll have to give herself permission to make herself a priority."

In Dream New Dreams, Jai Pausch shares her own story for the first time: her emotional journey from wife and mother to full-time caregiver, shuttling between her three young children and Randy's bedside as he sought treatment far from home; and then to widow and single parent, fighting to preserve a sense of stability for her family, while coping with her own grief and the challenges of running a household without a partner.

Jai paints a vivid, honest portrait of a vital, challenging relationship between two strong people who faced a grim prognosis and the self-sacrificing decisions it often required. As she faced life without the husband she called her "magic man" Jai learned to make herself a priority to create a new life of hope and happiness - as she puts it, to "feel a spark of my own magic beginning to flicker."

Dream New Dreams is a powerful story of grief, healing, and newfound independence. With advice artfully woven into an intimate, beautifully written narrative, Jai's story will inspire not only the legions of readers who made The Last Lecture a bestseller, but also those who are embarking on a journey of loss and renewal themselves.

“A brave and beautiful book. Dream New Dreams grabbed my heart from the opening page and didn't let go until its uplifting end. Jai Pausch is a stirring example of the power of life to triumph over any challenge. Bravo.” (Bruce Feiler, bestselling author of Walking the Bible and The Council of Dads)

Not what it seems

I’ve heard a lot of people say this book is just too depressing. Well, it is depressing. It’s about her life from the time she finds out her husband is dying. It’s her side of the story. She had 3 kids under 5 and a dying husband who wanted all of her attention. Unfortunately, that’s the majority of the book. Having read his book first, I was hoping she would spend a brief time discussing how she set with his diagnosis and the end of his life and more about how she copes after and was able to find love again after the turnout her first 2 marriages. It does turn into a story of hope at the tail end, but it’s a lot to get there, which really just reflects the frustration of her journey.