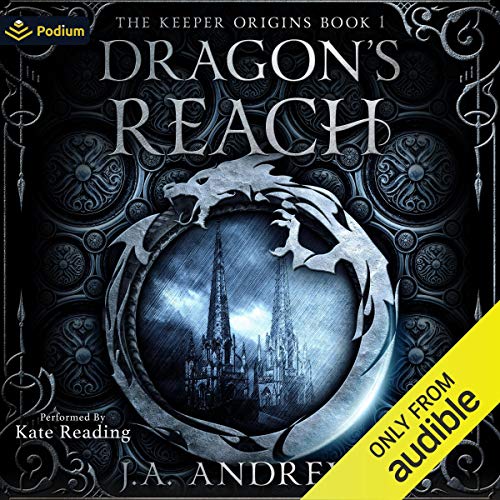 By: JA Andrews
Narrated by: Kate Reading
Try for £0.00

The tale of how an orphaned thief escaped the slums, united a nation, and brought a mighty empire to its knees.

The truth is neither plain nor simple. Sable, a reluctant thief from the slums, can feel truth when people speak. For years she’s been using that skill to try to break free from the vicious gang boss to whom she's indebted.

Escape comes in the form of an odd set of companions: a dwarf running from the past, an actor with a magical, glowing tree, a too-helpful kobold, a playwright with a knack for getting stories out of people, and a man and woman with suspicious, magical powers.

But Sable’s freedom is short lived. On the edges of civilization, they discover hidden, terrifying lies in the offers of peace from the brutal Kalesh Empire. Now, she must return to the city she fled, and along with her companions, attempt an impossible task: convince everyone, including the powerful Dragon Prioress, of the truth.

Except the Kalesh web of lies has ensnared everyone.

With her land, her people, and everything she loves hanging in the balance, Sable is the only one standing between freedom and certain death.

The Keeper Origins trilogy and the Keeper Chronicles trilogy can be listened to in any order. They take place in the same world but are stand-alone books.

What listeners say about Dragon's Reach

Another fantastic entry in the Keeper Universe

Having just finished the first Trilogy of Keeper books I was very keen to experience more of it. I was then delighted to find that this book existed!

Having listened through, and thoroughly enjoyed the original 3 books, this entry into the prequel series in this universe met every expectation and desire that I was looking for following on from the first 3.

The characters are all highly enjoyable and likeable, their development and personalities are excellently portrayed. with there existing a nice level of depth in every one.
The journey they take is gripping and entertaining to be a part of.

In a sense, like the first book of the original trilogy, once I was introduced to the characters and the world I was honestly hooked.

This alternate take on the universe is highly enjoyable and I am enjoying seeing it from another perspective - one in which the stage is being set for the future events.

Part of me wanted to carry on in the original timeline, but this setting is just as intriguing and engaging and I am very much enjoying the way the links between the two are connected.

I can’t wait to hear the rest of the story and hope that should this new series end there will be more from the world of the keepers after !

I really wanted to like it but after 10hrs of listening I just couldn't stay focused on the story anymore.
The whole thing is so monotonous and flat. And the narrator is not helping at all. You feel like something interesting could happen any minute now, but it just never does.
Waste of time and credit in my opinion.

After listening to the Keeper chronicles trilogy,I thought I'd give this a try. oh dear, I failed to warm to any of the major characters they all seemed a bit soulless. the plot is implausible ( I know it's a work of fiction in the fantasy genre but even so). The narration tries to give the story a level of gravitas it doesn't warrant. There are a couple of good setpieces but they are too few and far between, the narrative lacks pace and urgency.

liked the story and the characters are great as expected but the actual story conclusion falls a bit short... if you like the series you will enjoy this one though it's nothing like the keepers

Such a gripping story! A brilliant start to the origins story that I’ve been looking forward to listening to.

I took a punt on this book and boy I was not disappointed. All of the characters are wonderfully written, yes, all of them. I found myself caring deeply about some them as the story unfolded. Of course the narration is every bit as much to blame as the writer.

No sooner had I finished book one when I started the next book and binged on it over a couple of days. A fantastic sequel.

A wonderful series so far and I am eagerly awaiting the final book in the series.

These are books I will definitely read over and over again!

A story full of individuals who lice in the grey, all dping what they belive is best. Superbly told and narrated.

Brilliant series great story excellent narrator highly recommend this series has me hooked a must buy. thank you

Great story and love this narrator

I love Kate Reading’ narrations and picked this up mainly to listen to her. I loved the story. Great sweeping epic with lots of rich characters and countryside. I loved following sable and her friends journey and can’t wait for the next instalment. What started out as quite a small tale in dockside has definitely escalated and opened up to become something else entirely, making heroes out of ordinary people. And villains out of heroes.

A great listen and complements the world of the other books.

The performance of the narrator was excellent

Before I get to the rest of the review I want to strongly suggest that you read the previous trilogy (The Keeper Chronicles) as well as the side stories first. The best part? You get all 3 books narrated by one of my all time favorites Tim Gerard Reynolds in a publishers pack so is there really any reason not to?

As a fan of the previous series I was super excited to get to see the events first hand that helped shaped the world I just enjoyed living in so much. It took me a little while to settle into the story, this is my first time listening to Kate Reading and I listen at high speed, but once things began to click I buzzed right along. Part 1 is really all about building up the relationship between Sable and Talia and their complicated relationship with Kiva.

Part 2 was where I really got into the meat & potatoes of the story, once the acting troop was introduced I really began to get drawn in by the characters, This is about where I got swept up in the first books and one by one I began to identify with each of them, getting drawn in by their stories just like I did in the first series with Ayda and Duglon. It almost makes me want to run off and join the circus...

As the book drew to a close I could feel JA drawing the lines of the story together, Through the subtle callbacks and little tidbits I could see the parallels between the characters in the story and the ones in their plays and even their antagonists. You begin to see magic being wielded more and more and are introduced to all kinds of new critters including an amazing little kobold. I have a feeling we will get some bloody vengeance in the next book or so and I can't wait to see the fireworks.

Its not as bad as the number of stars, but

So, first....the book ends horribly, its not quite a cliff hanger, but after all the time spent...it might as well have been. The prose and flow within each individual chapter are nicely done, but the plot is a plodding, awful mess. You spend a lot....and I mean a lot, of time sitting on the sidelines doing nothing....while nothing is really going on.

I had a real hard time connecting the MC with her age and experience....she just felt naive and younger than the 25 years she is suppose to be....I almost wonder if the writer changed her age(and her sisters) at the end.

Part I felt like it was stripped out of another novel and thrown in, while changing the MCs. Part II started to get interesting, flowing....and then it started to plod along again. Part III, was the worst parts of Part I.

The book ended and I just didn't care about the MC, her sisters, the troop.

Is the book really that awful...no....certain chapters and sequences are very much engaging....but as a whole its just not very good.

Is it worth a credit...if you like plodding plots(and let's face it, you are out there), yes its a nice a story....but I can not recommend.

I like to listen to audiobooks while I work. Sometimes I miss parts of books because of that and can only effectively listen about ninety percent of the time. With this book, I didn't want to miss a thing! I felt like this book was very well written, and had some great storytelling.

Kate Reading is flawless as always. She is incredibly talented and by far one of the best narrators out there.

I can't wait for more books!

Blown away. Great characters, great story. Listened without attention as Kate Reading brought life to all of the cahracters, so much so, thatI ended up yelling at the characters in my mind as to what they should do. Kudos to the author on a job well done.

I've listened to literal months worth of audio books and this has been my favorite. A truly incredible story that ticks every box.

Truly enjoyed this continuation of the keeper chronicles. The narrators voice choices and delivery were wonderful. Pernicious's voice was especially apt. Looking forward to book two.

Thoroughly enjoyable. A bit slow start as the characters and environment were introduced and fleshed out but the story definitely picks up. The main character, Sable, was outstanding and her character development and growth throughout the story was well done. I really enjoyed JA Andrews Chronicles series and look forward the next in this Keeper Origins series. The story ends with Sable in a "between a rock and a hard spot" situation and I look forward how it is resolved in the next book. Kate Reading was also outstanding. Definitely worth a credit. Some violence but overall a story that is suitable for a younger audience as well.

I did not want it to end! When do we get the next installment? Great characters and refreshingly novel situations.

Excellent Book. It is amazing!

Totally different story, than I have read before excellent character development, it really leaves you wanting to read the next book.

My new favorite author! Great story and character development. Fantastic narrator, also one of my favorites!