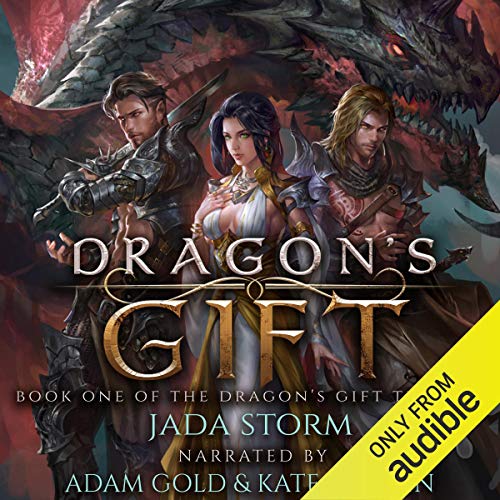 By: Jada Storm
Narrated by: Kate Marcin,Adam Gold
Try for £0.00

Three dragons. One woman. A reverse harem fantasy that will leave you breathless and begging for more....

Dareena Sellis is a nobody. The orphaned daughter of a no-name farmer, she toils away as a serving girl at Hallowdale Inn, her only marriage prospects either shipping off to war, or pawing at her skirts with their grubby, gnarled hands.

But fate takes a strange turn the day a dragon huntress comes to town. Suddenly, Dareena is swept off to Dragon's Keep, trading in her raggedy dresses for silken gowns, her closet-sized room for feather pillows and spacious gardens, and her miserable suitor for three very handsome, very virile dragon princes.

For Dareena is not a nobody. She is the Dragon's Gift - the one woman chosen by the gods every century to bear children for the future king of Dragonfell.

Despite her pre-ordained path, Dareena's fate is far from certain. The crown has not given birth to more than one son in nearly 1,000 years, and the line of succession is far from clear. Neither of the princes are willing to cede Dareena to the other, and yet she must choose. For the enemy is knocking on Dragonfell's door, and Dareena's decision could either mean the kingdom's salvation....

IMPORTANT NOTE: This is a true reverse harem romance, NOT a love triangle. Expect to see danger, intrigue, hot sex, strong language, and fire-breathing dragons in this book. For 18+ listeners. You have been warned!

What listeners say about Dragon's Gift

There is a heads up to this book, it ends in a cliff hanger but the second book is on kindle and the third one is due end of December 2017. This just came to Audible so I'm sure the others will follow.

I have to say that my favorite thing about this is that it is not only told in multiple POV but the voice actors to back and forth like a real conversation. You never have a female trying to do a male's voice and vice versa. Don't get me wrong it isn't something I hate, but because it is done this way it's much more like your listening to an old time radio program from back in 1940's. Can't say enough about how awesome the voice actors are, I plan to look for more from them!!!

This story is well rounded, the world building is very easy to imagine. Plenty of sexy scenes that don't turn the story into a strait porn story. All of the hot scenes are one on one with the h dividing her time between the triplets, I have to say that I like that better than one woman having to take care of everyone at the same time and the author trying to tell me that "it's all about her"!! That's a lot of work for one woman!! I much more enjoyed this game on what is now so popular "reverse harem"

I used a credit on this and don't regret it one bit, but would have liked it this hard been available at a discounted price since I already have this book on Kindle.

not my kind of book

good story line but jumped right into sex. yup too much sex not what I was looking for. it is well read and written well if you want just sex and brarely story.

The narrator was did an amazing job. Where is the second book? I cannot find it?

I love a good reverse harem story but the characters have to be redeeming especially the girl. The main female in this book came off as a willing whore instead of a confused morally conflicted virgin summoned to be a breeder. She was so eager to be sexually active with all 3 brothers within days of eachother. I wish she was smarter in how she dealt with the boys.

Would you consider the audio edition of Dragon's Gift to be better than the print version?

Absolutely. Both the female and male voices are incredible, and they switch on/off like a radio drama. It's perfect.

my favorite fantasy romance by far.

the story is great and you can't put it down. the narrators are perfect for the characters in the book

This is definitely not a PG romance story but it has great character and plot building. The performance of the two narrators added depth to the story and brought each character to life. So love this story, can't wait to get the next book!

I truly enjoyed listening to this well written story. The narrators were fantastic delivering the lines with such emotion, it made the story all the better. I would barely put the audiobook down for any length of time. I must admit either I missed that this was a cliffhanger, because I was very upset about that. Bit I will be getting the next.story immediately. Recommend highly.

Different in a good way!

The story is developed and so our the characters. I'm hoping the next book will have more details surrounding their fathers descent.