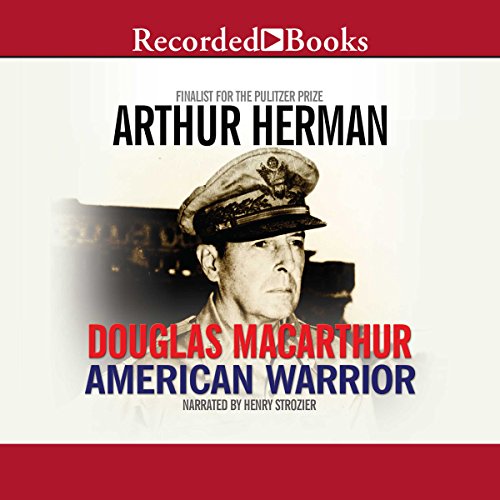 By: Arthur Herman
Narrated by: Henry Strozier
Try for £0.00

Douglas MacArthur was arguably the last American public figure to be worshipped unreservedly as a national hero, the last military figure to conjure up the romantic stirrings once evoked by George Armstrong Custer and Robert E. Lee. But he was also one of America's most divisive figures, a man whose entire career was steeped in controversy. Was he an avatar or an anachronism, a brilliant strategist or a vainglorious mountebank?

Drawing on a wealth of new sources, Arthur Herman delivers a powerhouse biography that peels back the layers of myth - both good and bad - and exposes the marrow of the man beneath. MacArthur's life spans the emergence of the United States Army as a global fighting force. Its history is to a great degree his story. The son of a Civil War hero, he led American troops in three monumental conflicts - World War I, World War II, and the Korean War. Born four years after Little Big Horn, he died just as American forces began deploying in Vietnam.

Herman's magisterial book spans the full arc of MacArthur's journey, from his elevation to major general at 38 through his tenure as superintendent of West Point, field marshal of the Philippines, supreme ruler of postwar Japan, and beyond. More than any previous biographer, Herman shows how MacArthur's strategic vision helped shape several decades of US foreign policy. Alone among his peers, he foresaw the shift away from Europe, becoming the prophet of America's destiny in the Pacific Rim.

Here, too, is a vivid portrait of a man whose grandiose vision of his own destiny won him enemies as well as acolytes. MacArthur was one of the first military heroes to cultivate his own public persona - the swashbuckling commander outfitted with Ray-Ban sunglasses, riding crop, and corncob pipe. Repeatedly spared from being killed in battle - his soldiers nicknamed him "Bullet Proof" - he had a strong sense of divine mission. "Mac" was a man possessed, in the words of one of his contemporaries, of a "supreme and almost mystical faith that he could not fail".

Yet when he did, it was on an epic scale. His willingness to defy both civilian and military authority was, Herman shows, a lifelong trait - and it would become his undoing. Tellingly, MacArthur once observed, "Sometimes it is the order one disobeys that makes one famous".

To capture the life of such an outsize figure in one volume is no small achievement. With Douglas MacArthur, Arthur Herman has set a new standard for untangling the legacy of this American legend.

What listeners say about Douglas MacArthur

I read William Manchester’s “American Caesar”, nearly 20-years ago. While I enjoyed its flowing, almost storybook style prose, there was a hint of partisanship, and only reluctant admiration.
I much prefer this! It is much better researched and way more balanced.
It does cover many of the negative stuff (more so even than WM), but it does so in a non-sensational manner.

Highly recommended for anyone wanting to learn about this great American. (…and I’m a Brit!)

Enjoyed it. Not too much of a struggle, despite it's length. A little bit idolizing.

Claims to be balanced... glosses over flaws

The author claims in his opening statement to attempt to portray a balanced view of MacArthur, discusses overly critical accounts and overly fan-boy accounts. This was one of the main reasons I bought this book. What he accomplished fell short. The book is almost entirely from MacArthur's viewpoint. The record is clear that MacArthur was both a great and a flawed human being (as are we all). Although I am glad I listened to this book, it could have been so much more had he not discounted and glossed over the poor decisions MacArthur did make. Was Peleliu really necessary? MacArthur's part in driving / extending his lines blindly into the Frozen Chosin was a big mistake, one O.P. Smith recognized at the time, yet MacArthur pushed on from Tokyo, just to name a few.... I wish I had learned more about General MacArthur than I did from this book... the search goes on.

Absolutely fascinating History-comes-to-life story of one of the 20th Century's indispensable men. I had a five-hour (driving) business trip on the road and could not wait to get going so I could listen without interruption! I have over one hundred books in my Audible library and this is in the top three.

When I was searching for biographies on MacArthur, I was looking for one that had pulled from many sources to create a complete and balanced picture of this great general. This book exceeded my expectations. Outstanding story and narrator. Highly recommend.

the best read out of the MacArthur books..

fair, not hero worship or condemnation. very complex and complete but not drug down by facts that do not matter.

Hagiography is too mild a term

I chose this book because it's well reviewed, and I've been anxious to read a truly balanced take on MacArthur's life.

This book ain't it. There are so many unsupported declarations of fact that are contradicted (with supporting evidence) in other sources. The smearing of Admiral Hart and General Brereton, to name but two early examples, are demonstrably biased; their versions of events are supported by official dispatches and other records.

MacArthur's excellent job in Japan is covered reasonably well, but there's a lot better info in American Caesar. And Herman's rationalization of MacArthur's demand to drop 20+ atomic bombs on China?

There are many better biographies of MacArthur. I've read several, and I've not read one worse.

A disappointing book about a remarkable man. It soars with praise for MacArthur’s hard fought and often astonishing successes, but when it comes to his errors and larger-than-life character flaws, the author leaves no excuse unturned. Even the slightest mistakes are instantly explained away in a pattern so rote it becomes a distraction. The level of analysis rarely rises above: “MacArthur was a badass; Washington sucks.”

Well done and interesting throughout

Very good. Author covered warts and all. So good. Amazing to be so interested throughout the entire audio

simply excellent!
a well rounded look at the most important general in US history that no one remembers.