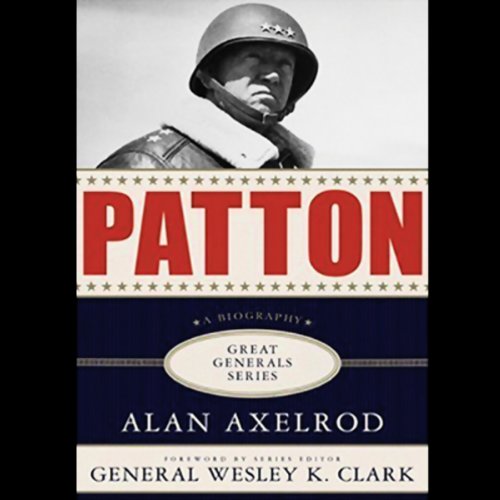 By: Alan Axelrod
Narrated by: Brian Emerson
Try for £0.00

George S. Patton was a general who achieved greatness in his field by contradicting his own nature. A cavalryman steeped in romantic military tradition, he nevertheless pulled a reluctant American military into the most advanced realms of highly mobile armored warfare. An autocratic snob, Patton created unparalleled rapport and loyalty with the lowliest private in his command. An outspoken racist, he led the only racially integrated U.S. military unit in World War II. A profoundly insecure individual, he made his Third Army the most self-confident and consistently victorious fighting force in the European theater. An exuberantly profane man, he prayed daily and believed God had destined him for military greatness.

This book is one of a series on great generals.

What listeners say about Patton

Great story of a Great General

This is really well told biography of General Patton.
Does a great job of exploring the soul and themes of his life, as well as telling the narrative brilliantly.

I've had this book for a long time but couldn't get the time to read to read it. I was pleased to find the audio version.

I really liked this book because it gives a lot of interesting detail but not too much. I read Truman and really don't like biographies that start out 4 generations before the main character is born. This book is very well balanced in detail and treatment of Patton.

The reader has a very odd, sometimes very annoying inflection. You have to really listen because sentences are oddly joined by the reader.

Highly recommend but I'll watch for this reader in the future.

History and a Hit Piece

At times the book seemed to serve the purpose to tell the story of Patton, and at others it seemed to have more of a purpose to undermine Patton and his character and find fault his tactics and approach to situations. I did enjoy the historical aspects, but it seemed as though the author was out to subtly discredit the man.

Invaluable in War, Disturbing in Peace

He’s a figure I’ve met many times in the course of reading. But whenever I do, it’s 1943 or 1944, and he’s already Patton, already the venerated apostle of armor and vilified slapper of soldiers. In this brief, brisk, sympathetic yet even-handed account, we get to see how he became both those things and more, living up fully to the critique by a fellow officer that serves as my title here.

No doubt, events Axelrod merely summarizes—Patton’s role in the development of American armor doctrine, or his affair with his niece—get deeper treatment elsewhere. But this book, though it focuses, naturally enough, on the Second World War, nevertheless gives a solid sense of the shape of Patton’s entire life and the origins of his unique personality. Wesley Clark's intro, as well as the last chapter, make it clear that Patton's legend and legacy are alive and well in the U. S. military. Our reader, Brian Emerson, does a fine job, sounding as intrigued with (and sometimes as bemused by) the man as we are.

Not too detailed and not too superficial

I recnetly purchased a book on Patton. It was boring due to the author's desire to include every "new" detail ferreted out from correspondence, etc. This book provides a well paced narrative. I loved it. Ron

Patton was a snob, philanderer and a racist. He was also the best combat commander who ever lived.

Having been an admirer of Gen. Patton since the first time I saw the movie starring George C Scott in 1972. I was in the military at the time in this figure of leadership and impressed me to the point that over the decades I have looked for and read many things about this man. The author of this book puts all the facts, stories, and the legend into an easy reading and listening format. I can only look back on my career and wish that I had been born in a day when many of the trials and tribulations that Patton pursued and established were done with reckless abandon and adventurism. An example would be the excursion with Gen. Pershing in the Mexico, shooting bandits and strapping them into the hood of some of the first automobile that had been developed, to then parade them back to Columbus New Mexico like dear strapped to the hood of a pickup truck during hunting season. This reckless abandon carry-on the rest of his career and life, and we're thankful of his leadership no matter how reckless was there to stem the tide of World War II for the Allies. The sequel to Patton, the movie was entitled The Last Days of Patton this movie also starred George C Scott, however sad it will give you a good insight into those last days after he had been injured. It's amazing to me that Gen. Eisenhower did not come to see Gen. Patton when everybody knew he was dying in the hospital in Europe.

The author does a wonderful job of telling the tale of Patton, which is read wonderfully by the narrator. An objective look at one of the US's most brilliant generals.

Thanks, Mr. Axelrod. Patton still lives, teaches and figths through your words.

This is a great book for both the unitiated who is somewhat curious about the General and those who want to learn more about him than what can be readily obtained by searching the Internet.

A great experience, this audiobook.

Great Audiobook and historical record. Amazing American general. Many interesting historical facts that were unknown about the general.

All you need to know about Patton