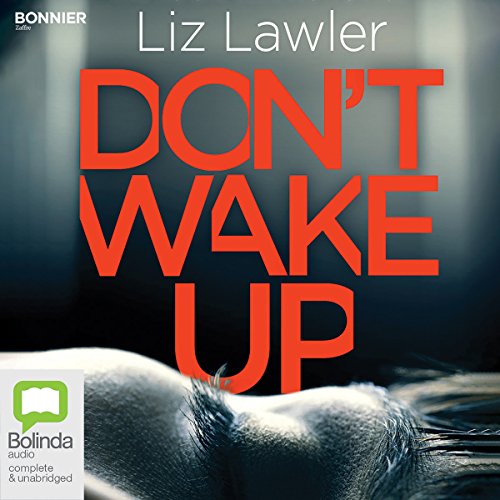 A dark and gripping debut psychological thriller with a horrifying premise and a stinging twist.

Alex Taylor wakes up tied to an operating table. The man who stands over her isn't a doctor. The choice he forces her to make is utterly unspeakable. But when Alex re-awakens, she's unharmed - and no one believes her horrifying story.

Ostracised by her colleagues, her family and her partner, she begins to wonder if she really is losing her mind. And then she meets the next victim.

So compulsive you can't stop listening. So chilling you won't stop talking about it.

What listeners say about Don't Wake Up

A thriller from beginning to end... great story and well narrated. Definitely recommend this book...

Fast pace thriller, I loved everything about this book. The narration was great with good changes of voice for each caricature.

What a captivating start this book has. Imagine, being strapped to an operating table at the complete mercy of a mysterious stranger and Lawler ups the ante considerably with the ensuing interaction between captor and captive. It's an excellent premise and Lawler builds on it with a careful laying of characters and plot. Like most thrillers there is reliance on coincidence but there are also some clever touches and twists part-based on deeper medical knowledge.

At times I felt some points within the book could have taken additional text to flesh them out a little more but that's probably me being fussy because it's an exciting ride to the end. One person who wasn't hanging around is the narrator Zara Ramm who seemed to be in a touch too much of a hurry to get through the book at the start. Either I got used to her pace or she calmed down though because I felt more comfortable after a while through the book.

This book is mostly about messing with blood and gore. A boring far fetched dragged out story line.

Brilliant read ! Kept me guessing all the way through . Sad this has come to an end ! Best I've read in a while

I thought this book was brilliant. It kept me gripped from beginning to the end.

What a damn good audio book. I couldn’t stop listening. The plot and the narration is superb. I can’t wait for Liz Lawler’s second book.

overall a great plot and story but right near the end a flaw in the storyline disappointed me. it was only a small thing but ruined the moment

predictable and a bit daft. I have to use more words for a review but not much else to say really.....

loved it. couldn't wait to listen next. great twist to the story.keeps you in suspense of what happens next

I listen to 1-3 audiobooks a week and eagerly await my pre-orders - so go I through mystery/thrillers much too quickly. That is why I was particularly pleased to find this book to be one of the better mystery/thrillers I’ve read in quite a while. The events unfold satisfyingly - nothing too subtle or too obvious, and the character development is complete and engaging. Additionally, the writing and storyline are both polished - even with the slew of new mystery/thrillers available, most are lacking and clumsy in execution. I do wish the ending was longer so we could really learn in detail how everyone got what they deserved - but it was nonetheless still satisfying. I very much look forward to more of Liz Lawler’s books. Highly recommended - the summary doesn’t do it justice, it’s absolutely worth the credit.

I really wish the big reveal was something different - more interesting! BUT, even with that, I loved the characters in this story - they each were very well developed and believable. I had a theory of what was really going on, and I was wrong. I liked my version better though haha! But seriously, it does all come together in the end. The narration was great and she distinguished between each character well. Overall a decent psychological thriller. I would definitely read more from the author :-)

Excellent thriller!I started this book and could hardly put it down.

I started this book and could hardly put it down. Medical descriptions and procedures correct. Relationships interesting and hard to figure out who did what and why. Excellent ending!
On to her next book!
Enjoy..

I've listened to quite a few Zara Ramm books and went looking for a title narrated by her when I found this one. She's just amazing!

This is a great little thriller. We know that Alex did not imagine the things that happened to her but the story is so expertly written that as it goes along, you start to wonder. The cast of characters were very skillfully developed and kept you guessing in this constantly escalating plot of what really happened.

Add note: This listen was great but if a book ever needed an epilogue, this one did. The world needed to know that Alex was okay.

Didn't need 10 chapters to wrap up

A good story, didn't guess the twist, but 10 chapters to wrap up the loose ends was excessive.

I couldn't stop listening to this exciting medical thriller. Lots of action, twists and turns and surprises in the plot. It was refreshing to have a likeable main character and a very nasty villain. Great narrator.

Fast pace mystery/thriller worth the credit and very good start for Author Liz Lawler. Small critic, I was looking for a little more in the character development, although the storyline interesting and creepy, I didn’t find that I “felt” much for any of the characters. I’m betting with a bit more experience the authors next book will be even better. Narration was very well done by Zara Ramm. I’ll be on the look-out for more from both! Well done!

It started off very promising, but just faded into silliness. I was waiting for some kind of mind blowing twist ending that never came. I do love the narrator though, and I was never bored.