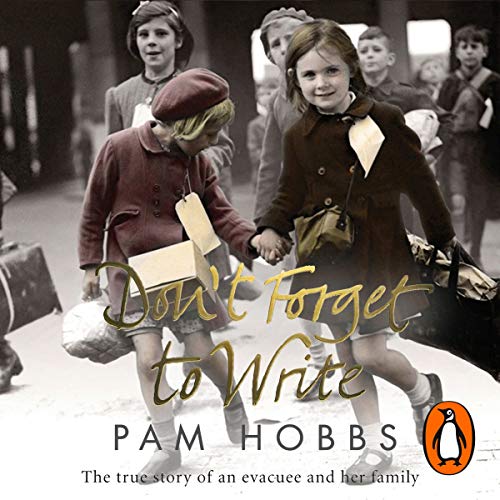 By: Pam Hobbs
Narrated by: Penelope Freeman
Try for £0.00

“Dad walked determinedly down the path, joined by two neighbours with five children between them. As we reached the corner of Kent Avenue, I looked back for one last wave. But Mum had buried her head in her pinny and it was a year before I saw her again.”

In June 1940, 10-year-old Pam Hobbs and her sister Iris took the long journey from their council home in Leigh-on-Sea to faraway rural Derbyshire. Living away from Mum and Dad for two long years, Pam was moved between four foster homes. In some, she and Iris found a second family, with babies to look after, car rides and picnics, and even a pet pig. But other billets took a more sinister turn, as the adults found it easy to exploit the children in their care.

Returning to Essex, things would never be the same again, and the war was far from over. Making do with rations, dodging bombs and helping with the war effort, Pam and her family struggled to get by.

In Don't Forget to Write, with warmth and vivid detail, Pam describes a time that was full of overwhelming hardship and devastatio - yet also of kindness and humour, resilience and courage.

What listeners say about Don't Forget to Write

The author clearly knows how to write but failed to keep me involved. I found this book a bit dull. Thats a pity because the subject is fascinating.

Yes. It tells me much about world war two that I didn't know and has a good mix of the highs and lows of evacuee life.

What other book might you compare Don't Forget to Write to, and why?

When the Siren Wailed by Noel Streatfield. Both are about evacuees in their 'new' family and the differences between the old and new lives. Only that book is fiction while 'Don't forget to write' is fact.

Her reading is well paced and didn't force my ears to feel a different emotion than the text was telling me.

I found it very sad at times especially when they had to leave one of the families.

It is a very good book and the author takes a balanced view of events including blaming her own behaviour on some misfortune.

What made the experience of listening to Don't Forget to Write the most enjoyable?

It was an interesting subject and well read

What other book might you compare Don't Forget to Write to, and why?

Cannot think of a comparison

The details of the period and personal experiences an emotions

This is a good book but I would describe it as a child's war experience rather than an evacuation story as a lot of it is actually written about before and after evacuation, it does not make the book ant less enjoyable but the impression if the tittle would make you think it is based solely on her evacuation experience.

Excellent story of a young girls life as an evacuee. how she coped and felt. Well written and also an insight into life during world war 2