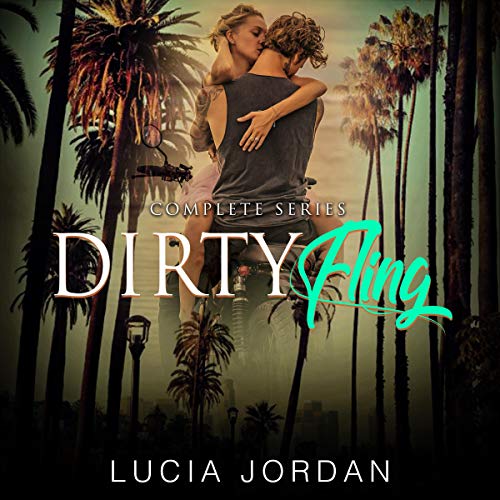 By: Lucia Jordan
Narrated by: Natalie Disaster
Try for £0.00

Harley left LA behind a long time ago. There were just too many bad memories there. But when she hears of her father’s death, it’s the only thing that could bring her back to town. Once a tough, kick-ass biker girl, now she’s bought a Prius and dresses in conservative gear. The only reminders of her youth are the angel wings tattooed right across her back. So now here she is, crossing into the city limits, with the hope of staying just long enough to settle her father’s affairs and getting the hell back out of town.

Cooper and AJ were hell on two wheels, bad boys through and through, and the last people Harley needed to be around. But that wasn’t what drove her away. It was what she’d seen them doing, and what she knew she’d never be to them. It was also because she never knew how she could possibly love two guys at the same time, especially these two guys.

But waiting in LA are two sinfully hot men, her old motorcycle, and a tougher biker version of herself she thought she’d never be again. Cooper and AJ have been waiting for her, longing for her. They’re not the bad boys they used to be. Now they’re grown men.

Things are about to get hot, and fast. Will Harley be able to keep up?

This book touched my mind

As usual, Ms. Jordan delivers with another sexy novel . Harley, AJ and Copper, childhood friends have reunited after 10 years and Harley is able to live the fantasy that she's had for her best friends

This is more than a fling

This is the story of Harley and her return to her childhood city. She left ten years ago and never looked back until the death of her father and to visit her friend Britlynn. She left behind 2 of her best friends, A.J. and Copper, that hurt her badly and humiliated her. As she arrives, all the memories she tried to leave behind comes back to the forefront.

Excellent book! Well except for work and when I finished it lol. Highly recommend! Thanks for this sexy book

Just to show, you can't hide from yourself. Absolutely loved this story and ended up purchasing the full book just to see what came next and how it was all resolved. I won't give away the story, happy reading

I guess what you hear about bikers could be true. I never really thought that people in real life behaved like in this story. Lucia makes what happens in the story sound convincing.

This was one of my favorite stories because of the element of betrayal. I don't want to give too much away but a lot of the stories don't have that element the same way this book did and I'm very interested to see what the Harley does with it and how she works past it. Awesome listen!!!!

Great listen so far. Cannot wait to listen the rest. Lucia Jordan does it again. Who doesn't love some menage action?

Great dirty little pleasure listen. Was happy too see a strong character as a girl who becomes a woman. Must listen

Just when you thought it going good...nope. Nothing wrong with sharing but dang, give a girl warning. Will she forgive her best friend? Will she have a lasting relationship with the two men she loved since high school? I hope so, but it's going to be a rough ride.

What a great book

What a great book.....a must read that's for sure....it had parts in it that for sure left you a hot mess

Dirty Fling is a amazing story. It pulls you in by the emotions of the characters. I cannot wait to read the rest of the series.