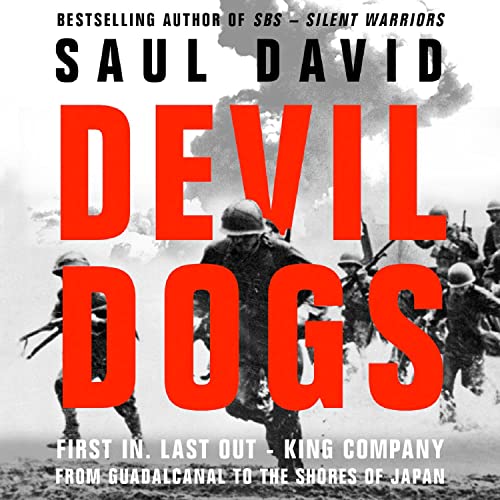 From Sunday Times bestselling historian Saul David, the dramatic tale of the first American troops to take the fight to the enemy in the Second World War, and also the last.

The ‘Devil Dogs’ of K Company, 3/5 Marines, were part of the legendary first Marine Division. They landed on the beaches of Guadalcanal in the Solomon Islands in 1942—the first US ground offensive of the war—and were present when Okinawa, Japan’s most southerly prefecture, finally fell to American troops after a bitter struggle in June 1945. In between they fought in the ‘Green Hell’ of Cape Gloucester on the island of New Britain, and across the coral wasteland of Peleliu in the Palau Islands, a campaign described by one K Company veteran as ‘thirty days of the meanest, around-the-clock slaughter that desperate men can inflict on each other.’

Ordinary men from very different backgrounds, and drawn from cities, towns, and settlements across America, the Devil Dogs were asked to do something extraordinary: take on the victorious Imperial Japanese Army, composed of some of the most effective soldiers in world history—and defeat it. This is the story of how they did just that and, in the process, forged bonds of brotherhood that still survive today.

Remarkably, the company contained an unusually high number of talented writers, whose first-hand accounts and memoirs provide the colour, emotion, and context for this extraordinary story. In Devil Dogs, award-winning historian Saul David sets the searing experience of K Company into the broader context of the brutal war in the Pacific and does for the U.S. Marines what Band of Brothers did for the 101st Airborne.

Gripping, intimate, authoritative and far-reaching, this is a unique and incredibly personal narrative of war.

"David recounts in this stirring saga the WWII campaigns of Company K, the 1st Marine Division unit… Skillfully plumbing the rich array of firsthand accounts by Company K veterans, David vividly describes pillbox raids, accidental deaths, and hellish jungle conditions, and draws incisive portraits of Marine officers and their command decisions. The result is a captivating chronicle of the war in the Pacific." (Publishers Weekly)

What listeners say about Devil Dogs

Saul David has swiftly become my goto author for the Pacific War. He has a brilliant skill of telling the story through the eyes & words of the brave men who fought in these deadly battles.

I can’t recommend his books enough.

Really enjoyed this, I know little about the pacific campaign and this was told brilliantly.

Very detailed and real life stories, that at times is hard to believe, even though it really happened.

Great book - loved it. Really appreciated the inside feel that if gave me of the horror and loss suffered by K35

Being European my history of ww2 is mostly centred around the European theatre of operations. This helps me understand what brave men went through. With no Hollywood BS. A great read even if you don’t have a love of military/world war 2 history.

Incredible journey of the Marines in WW2

What a complete look at the experiences and strategy of the Marines in the Pacific. Starting with Guadalcanal, Cape Gloucester then onto Pelilu and Okinawa.
Anyone who has read or watches much on the Pacific bound Marines there is alot of familiar names, their story is told expertly.