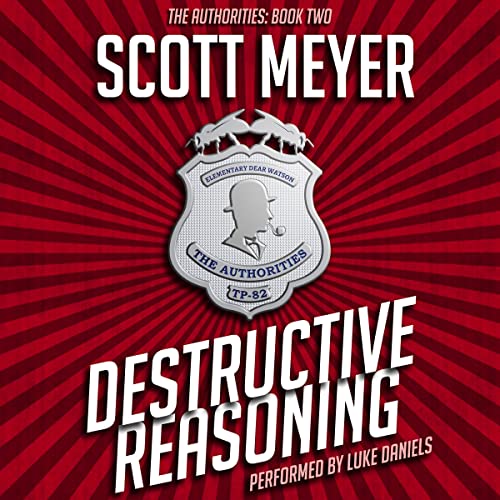 By: Scott Meyer
Narrated by: Luke Daniels
Try for £0.00

An actor is brutally murdered while sitting alone in his fully locked car.

A note arrives claiming responsibility and explaining the man died not for who he was, but for who he pretended to be. He played Dr. Watson in a production of Sherlock Holmes. The note promises to kill everybody in Hollywood currently playing Dr. Watson: a surprisingly long list.

Billionaire Vince Capp sends his crime fighting team, the Authorities, down from Seattle to solve the crime, stop the killer, save lives, and above all else, increase their national profile. But it won't be easy. Detective Sloan will have to wrestle with the most irritating case of her career while two of her key operatives are terribly distracted: Rutherford has found a new role model to follow and emulate, and Max must tangle with a mysterious figure from a past he'd rather forget.

Destructive Reasoning is book two in the Authorities series: a funny, thrilling, confounding mystery in a setting of Hollywood glamor viewed with Seattle ironic detachment.

Puzzling clues will be uncovered!

Shocking truths will be revealed!

Angry bees will be released!

What listeners say about Destructive Reasoning

If you loved Magic 2.0 you'll love this.

If, like me, you pine for those days when you listened to magic 2.0 books for the first time, you need to listen to these books. Pure comedic silliness. Scott Meyer is a treasure.

Amazing narration with an OK story and some virtue signaling thrown in the mix.

I am a big fan of Scott Meyer. Off to be the Wizard is pure gold. Likewise, his first The Authorities book was genius. This one not so much. It was by no means terrible and overall I would recommend it if you are a fan of Meyer’s work. As always, Luke Daniels is a master with his voice work. It gets a little preachy in some parts. Virtue signaling seems to be what is required of authors these days. There is no question in my mind where Mr Meyer stands politically. It takes away from the story. I’m not sure if authors ever read these reviews on Audible. If so I would say to him, just entertain me Scott. You got political a bit with The Vexed Generation and it took away from the story. You did a bit of that here too. With that said, I think the Authorities would make an amazing serialized TV show.

I thoroughly enjoyed the first book in this series, and was excited for the second installment. Unfortunately, the narration of the voices changes drastically for several of the characters, and in one case (Albert), the character changed completely too. I tried several times to power through the terrible new voices, but it was so distracting that I couldn't get past the first few chapters. I am very disappointed, since I truly enjoyed the first book, mostly due to the excellent narration. As it was the same narrator, I am assuming there were sweeping changes in the direction. This was a big letdown.

not as good as the first.

I'm a HUGE fan of Off to be the wizard, and Book One of the Authorities.

That being said, although the book was well paced, the choices the characters (author) made were silly.

Sloan was worthless this time around. useless and no need for her to even be there.

Max is completely out of character and it's pretty upsetting. It explores his love life a little bit and that was a pointless side story in this book as well.

Even the believability of minor new side characters strains credulity.

Luke Daniels changed a couple of the voices slightly just enough where I almost found it jarring.

That's a lot of negatives in this review... but it won't stop me from getting book 3.

Another fascinating case - slightly off narration

Once again Scott Meyer has produced an insightful, funny and attention grabbing story. After an actor with the part of Doctor Watson is murdered, a threat against more Watsons brings The Authorities to Los Angeles to try to stop a serial killer with a grudge against Sherlock Holmes sidekicks.

With his usual cutting wit, Meyer pokes fun at corporate culture, marketing, and the general Hollywood industry while also sharing insights into the histories of more of the team as they try to find who's behind the killings. The story is fun, a delightful mix of light and dark, and up to Meyer's usual talents.

Sadly, the same cannot be said about Mr. Daniels' performance. His reading is excellent, as usual, but his voice acting has changed dramatically for some of the characters. If you're a fan of the original story, be prepared for troublesome changes in both the voice and character of our favorite professional forensic team.

Rutherford is a little more gruff, deeper in tone and grittier - this isn't too bad. One could imagine that his time portraying the bad-boy his job demands has caused a bit of a change in his attitude and thus his speech patterns.

Terry is the same, and Max is mostly the same - a bit higher pitched, with less of a pronounced accent and a bit more whine than we'd expect from the world leader in non-aggressive combat.

Sloan is markedly different - her computer synthesized voice is deeper and more robotic. This can be excused by imagining that Albert has tinkered with her voice - possibly even to Sloan's satisfaction.

The real problem with Mr. Daniels work is Albert. In the first book he was a lovingly geeky, enthusiastic, energetic technician. In this release, Albert sounds like a worse version of Maddy from the Magic 2.0 series, with off-putting pitch changes, a breathier tone, and a general impression that he's ***constantly*** whining. His part in this adventure is larger - which makes the profound change in his sound (and resulting impression of his character) very off-putting and it really takes away from the story when you can't help but remember the original Alberts playful, upbeat tone. One has to wonder whether Mr. Daniels was too rushed to review his previous work properly to recapture the original voice, or whether he just couldn't be bothered. Personally I hope it's the former case - that would at least be a valid excuse.

Despite the problems with the voicing, Mr. Daniels still manages to deliver Meyer's wit expertly - so that while the listen feels repeatedly flawed in more than a few places - ultimately it's still a worthy adventure worth the listening time!

The Authorities return with a new fun adventure.

The Authorities return with several members getting a bit more time to shine especially Max . Hapless Rutherford does more heavy lifting and occasionally feels the weight of his burden. In a familiar type of case. With a wonderful payoff.

My biggest complaint is the change of some of the characters tone. Specifically Albert came accross like a nerd from the Simpsons instead of the intelligent engineer from the first book.

I waited YEARS hoping there would be a sequel to the Authorities. I'm happy to say that this sequel lived up to my hopes in every way. I can only hope there is more to come!

I love this series. This second ebook is great...I love to laugh and this book does the trick! The characters are inreresting. The whole plot is entering too. The narrator does great. I recommend this book .

This book was just sheer entertainment. Hilarious ,smart with a great story line. I hope a book 3 is in the works. Luke Daniel’s with the stellar performance.

love Scott Meyer, loved this book. Never a disappointment. Can't wait for the next one