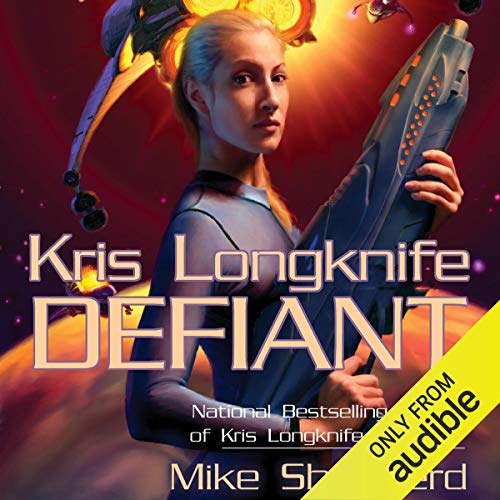 Born into a family of wealth and political power, Kris Longknife turned her back on high society and followed a different family tradition by joining the Marines. But now she finds herself relieved of duty. She's gotten in the way of someone's agenda - to bring down her father, the Prime Minister of Wardhaven.

Now, with the fleet off on a propaganda mission, Wardhaven is left vulnerable to enemy warships that establish orbit around the planet demanding surrender. With the remnants of the fleet ordered to stand down, Kris declares herself Commander-in-Chief and plans a desperate gambit to defend her world.

Commandeering every spaceworthy vessel she can get her hands on and recruiting every able-bodied person willing to risk their life, Kris leads the most important mission of her career - and it may be her last.

What listeners say about Defiant

I had read all of the Kris Longknife books previously (as e-books and paperbacks incidentally) and was re-reading the series as another appeared so thought I would try one as an audio book. It was a wise decision for I think I enjoyed this more than either paperback or e-book. There is sometimes tendency to 'speed read' certain parts of a particular book: you cant really do that with an audio book so, somehow, this seemed more interesting. I would recommend the story to anyone interested in space opera. It is well written, good characters, and interesting situations. It has made me want to listen to the other books in the series and to move to my other favourite space opera series, that of Honor Harrington.
So, finally, a good story read well - the female voice is a nice change for science fiction and soothing as well as interesting. If you have a mobile device (I have and iPAQ) you can even listen in the bath.
Highly recommended

two wonderful adventures for the price of 1

loved the two connected stories in this one and that Abby got some time in this book. thought there would be more on the chip...

the book was also wonderful portrayal of courage and fighting for freedom and the teribble price we sometimes have to pay 4 it all. what a tear jerker.

Someone is after Longknifes and the threads and whispers have 'Peterwald' on the label.

I enjoy Shepherds stories. There is plenty for your money; a story dependent on Grandpa Ray's back story sets up another hostage rescue (Kris will not abide kidnappers) flows through Kris' arrest and a wedding into a full space battle over Wardhaven. What I enjoy most are the way the characters develop through the book and the series.

My usual reservations for the narrator; listen to the sample first. (Trivia: the battle net song is "March of Cambeadth". It's on You Tube. Don't play around young children or they'll start singing the chorus at inapropriate moments!) Those of a sensative disposition may need tissues.

How many of them can we make die?

Defiant starts out like Down Periscope. The Navy promotes Kris to command an experimental ship full of misfits no one else wants. Things change when Kris is arrested. Mike Shepherd describes the arrest with so much feeling and emphasis, I expected the trial to be a focal point. This changes when Kris is sent on a diplomatic mission to a planet Hikila (planet Hawaii), which turns into a hostage/terrorist situation. Sadly, very little of the book is spent on Kris’s rehabilitation from the arrest. About 8 hours into the book, Kris returns from Hikila and maybe five minutes of the audiobook are dedicated to a summary recounting of how while she was away a few people from Olympia talked to the media and charges were dropped. I would have loved to hear this part in detail. Instead, we have Tom and Penny’s wedding leading right into the major conflict of the book: the invasion. Disjointedness aside, the invasion was great. Mike Shepherd uses that third-person narration to present us with the enemy sans-Kris, making him more realistic and the conflict more suspenseful. Around 5 hours to the end of the book, I had a feeling in the pit of my stomach you get when you are a few hours away from giving a big speech. About 4 hours to the end of the book, I could not stop listening. I stay up until 2 a.m., on a Tuesday night, to finish.

On Narration:
While I liked Dina Pearlman’s reading of the first two books, I had issues this one. Her reading after they land on Hikila slows down and becomes over-emphasized which makes it sound insincere. That aside, what really killed it for me was her reading of “the March of Cambreadth.” Mike Shepherd dedicates about 2 hours integrating that song to the fight. He quotes all the lyrics, and gives it a fake history. Kris and her crew screaming along to it. They even shoot on the song’s command! And Dina Pearlman reads the lyrics with the cadence you use when playing “patty cake” with a toddler.

This is book three in the Longknife series. In this episode Kris faces the imminent threat to her planet. Kris is accused of stealing fund that were to go to farmers, while on leave awaiting a hearing her great grandfather King Al sends her to see an old friend of his dying on a different plant. She returns to Wardhaven as an invasion is pending. She skirts the law and organizes a flotilla to defend Wardhaven against a force of hostile warships.

In this book we see Kris develop her command skills as she takes command of a large force of her own. The humorous prose adds delight to a fast pace, action packed suspenseful story. On the negative side I am getting tired of Shepherd’s constantly repeating the phrase “one of those Longknife’s.” I am beginning to enjoy “Nelly” Kris’s computer. I find Nelly’s development fascinating. Dina Pearlman narrated the story.

It just keeps getting better!

Listening to the Kris Longknife saga to me is a real treat. During the last sale on 1st in series, I needed to find something new to follow. I chose 5 different series titles, but the Longknife saga is proving I made the right selection to follow. Sure, the narration could be a little better, but it's not all that bad. The character are developing very well and it's easy to get lost within any of these stories. Defiant brought both good and bad. We say goodbye to some well liked characters, but the plot thickens with the a rival clan. I LOVE IT! This is a great listen and I strongly suggest this to anyone. Keep them coming Mike. Please.

After reading the first two books, listening to this one was a disappointment. The narrator created an impressive array of voices. However, they all sounded like petulant children trying to imitate grown-ups. The book was also problematic. There are two seemingly unrelated stories in the book. The first story line moves along with good pacing. The second story is way to long and poorly paced. I guess I'll go back to the printed versions and hope they are more like the first two books.

Love the book, hate the performance.

This is one of my favorite books, which I've read several times, but Dina Pearlman reads it like she's a struggling sixth grade reader. She adds pauses in the wrong places, sometimes changing the meaning of a sentence. And she obviously hasn't heard the song that is quoted significantly throughout the last third of the book. It gets to the point that it's almost painful to listen to.

What was one of the most memorable moments of Defiant?

I love reading the book, especially the last third, which is the battle.

Again, Dina Pearlman reads this like she's struggling to read, putting in pauses where none belong, sometimes changing the apparent meaning of a sentence, and the "March of Cambreath" is badly read. It's obvious she's never heard it. Also, sometimes her voice for Sandy Santiago is too close to her voice for Kris, and it's hard to tell who's saying what at times.

Was Defiant worth the listening time?

Please get someone else to re-record this book. I'll be returning it until then.

Continues to be fast paced with unique problem solutions and exhibiting the dedication that can be found in the human race when the pressure is on.

With this third book in the series, we finally get the payoff on the science fiction aspect of the story as most of the book is a long space battle. Plenty of pew pew and ship-to-ship fighting as a ragtag fleet takes on several mysterious destroyers bent on taking out Wardhaven.

Story: The navy still has no idea what to do with "One of THOSE Longknifes" and so gives Kris captaincy of a small patrol boat - PF109. It is where the navy puts all the 'brats' of wealthy Wardhaven scions - the ones who cannot be controlled and a place where they can do the least amount of damage. The problem is, Kris actually wants to do something with the small but surprisingly maneuverable patrol boats other than fly them around on test runs. Turns out, things will become deadly serious as Greenwald eyes Wardhaven itself as their next target.

I really enjoyed the space battles and soap opera action. It was a welcome change from the grounded assignments of the previous two missions. As well, we got more than the 'monster of the week' and instead had direct overarching series plot points materialize and jeopardize more than just outwater planets. The events of the next book are set up nicely in this volume.

In all, I am enjoying the series now this third book in. Much better writing than Moon's Vatta's War but of course, nothing compares with the Huff Confederation novels. But it has a charm all of its own.

Note: I listened to the audio version and Dina does an excellent job with the narration.

Good Space opera, but the reader really detracts. Should have taken a course in naval terms. Lots of miss pronunciations.