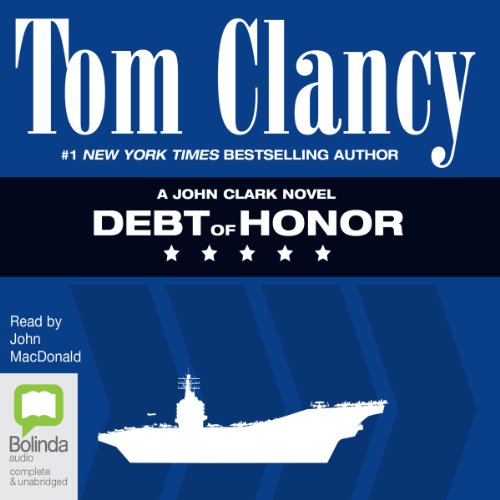 By: Tom Clancy
Narrated by: John MacDonald
Try for £0.00

Razio Yamata is one of Japan's most influential industrialists, and part of a relatively small group of authority who wield tremendous authority in the Pacific Rim's economic powerhouse.

He has devised a plan to cripple the American greatness, humble the US military, and elevate Japan to a position of dominance on the world stage.

Yamata's motivation lies in his desire to pay off a Debt of Honor to his parents and to the country he feels is responsible for their deaths - America. All he needs is a catalyst to set his plan in motion.

When the faulty gas tank on one Tennessee family's car leads to their fiery death, an opportunistic U.S. congressman uses the occasion to rush a new trade law through the system. The law is designed to squeeze Japan economically. Instead, it provides Yamata with the leverage he needs to put his plan into action.

As Yamata's plan begins to unfold, it becomes clear to the world that someone is launching a fully-integrated operation against the United States. There's only one man to find out who the culprit is - Jack Ryan, the new President's National Security Advisor.

"As always, the author of Patriot Games and Clear and Present Danger spins out story threads in a rich but bewildering tangle of plot and setting, then vigorously weaves them together. Here, the heart-stopping climax is unexpected, but oddly appropriate." ( Publishers Weekly)
"A harrowing tale... Clancy keeps you riveted with political intrigue and military maneuvering [and] sends you rushing headlong to the book's stunning conclusion." ( USA Today)

What listeners say about Debt of Honor

The story is fabulous, I've read it several times but wanted to listen to it in the car, I lasted five minutes before turning it off.

What was one of the most memorable moments of Debt of Honor?

The moment I switched it off and couldn't here the dreadful monotone voice of the narrator.

Everything, his tone and intonation, is dire, he makes no effort to alter his pitch or tone to indicate dialogue. I would rather listen to a sheep sheering contest on the radio.

What character would you cut from Debt of Honor?

Come on, there have got to be better narrators than this, you've ruined a superb story.

What made the experience of listening to Debt of Honor the most enjoyable?

The story itself is one of my favourite Tom Clancy Novels, especially when considered with the follow up novel 'Executive Orders'.The story builds slowly and does an excellent job of drawing you in.

What was one of the most memorable moments of Debt of Honor?

The ending. I won't say any more as I don't want to ruin it!

not really, although I did find that I couldn't stop listening at certain parts of the story.

Great story, let down by the Narration. In particular, I found John McDonald's narration of character voices to be especially poor. His 'Al Trent' voice in particular, with the accent he gives him, is both awful and laughable in equal measure, breaking any atmosphere that has been built.

I think the narrator (listed as John MacDonald) is either a computer or it's Stephen Hawking in disguise. The book sounds like an early attempt at a Text-To-Speech effort by Kindle - a monotone voice sounding very electronic and devoid of inflection. It is going to be very difficult to listen to this for 38 hours.

narrated by someone who sounds human and not a synthetic voice

What could Tom Clancy have done to make this a more enjoyable book for you?

don't know, could not get passed the voice

Who might you have cast as narrator instead of John MacDonald?

any body with soul

disappointment, have not listened passed half of chapter one

This is very badly narrated, sample before you buy

Great story, Clancy at his best, but ruined by poor narration. I love working with my hands but a lot of workshop tasks are physical requiring time and effort but no intellectual input. I also love books; over the years I must have read thousands of them, some were okay, a few weren't so good and some were great. Audio books are the perfect way to combine my two favourite activities, my body can be busy painting my latest project while my mind is away involved in some covert operation in the middle east or riding a dragon on another planet. This all depends on the narrator as so much hangs on their ability to bring the listener into the story, to bring it to life so the listener comes to care about the characters. Sadly the narrator here has failed, his delivery is as compelling as if he was reading a laundry list. I don't understand how he got the job; given the money generated for the publisher they can certainly afford to hire the best ,not someone obviously incapable. We deserve better and so does the work of an author of this calibre. Do yourself a favour and buy the printed book because listening to this will rob you of a great story.

great story but the narration was shocking ..... truly shocking it was like listening to a robot.... no punctuation it was just a monotone voice

What disappointed you about Debt of Honor?

Story is good but aided quality makes it almost impossible to listen to.

Tom Clancy prophet of chaos of the late 20th cent.

This book is the book that puts together all the best that was Tom Clancy. His ability to foresee the near future of this crazy world was without doubt the finest since Jules Verne.
I have followed him since the Hunt for Red October and still read all the new releases by his new authors but there can only be one Tom C!ancy. Every year I listen to the complete series of Jack Ryan and John Clark novels and still thrill to its content.

For me, this Clancy epic has dated more than the rest. Still well written and nicely Boys Own stuff on the military side. Decent narration.

The audio version is good but unfortunately I found John Mac Donald difficult to liston to for long periods. His style is a very monotone and tiring.

The writing and story telling the usual good Clancy quality.

Issue is the terrible poor quality of the low bit compression. Makes the voice of the narrator feel very robotic. This jars the listener from the experience. had I not paid over $20 I would stop listening.

if a company is the sole provider of this unabridged title they should put out a better quality recording for the good of the listener, the narrator, their company, audible, and Clancy.

if it needs to be a larger file so be it.

I’m 12 1/2 hours in with 23 1/2 to go. The story is weighed down with detail about everything & while interesting, it gets in the way of the plot. Only because Tom Clancy is such a good writer am I still persevering. Although, another 23 hours!!

If you could sum up Debt of Honor in three words, what would they be?

John Clark as he is just a great hero who gets the job done.