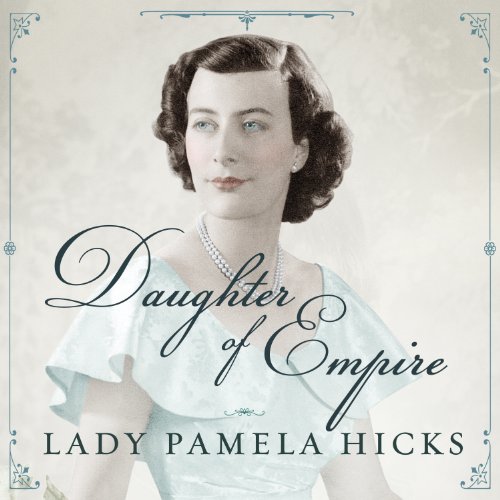 By: Pamela Hicks
Narrated by: Corrie James
Try for £0.00

Few families can boast of not one but two saints among their ancestors, a great-aunt who was the last tsarina of Russia, a father who was Grace Kelly's pinup, and a grandmother who was not only a princess but could also argue the finer points of naval law. Pamela Mountbatten entered a remarkable family when she was born at the very end of the Roaring Twenties.

As the younger daughter of the glamorous heiress Edwina Ashley and Lord Louis Mountbatten, Pamela spent much of her early life with her sister, nannies, and servants-and a menagerie that included, at different times, a bear, two wallabies, a mongoose, and a lion. Her parents each had lovers who lived openly with the family. The house was always full of guests like Sir Winston Churchill, Noël Coward, Douglas Fairbanks, and the Duchess of Windsor (who brought a cold cooked chicken as a hostess gift).

When World War II broke out, Lord Mountbatten was in command of HMS Kelly before being appointed chief of Combined Operations, and Pamela and her sister were sent to live on Fifth Avenue in New York City with Mrs. Cornelius Vanderbilt. In 1947, her parents were appointed to be the last viceroy and vicereine of India and oversee the transfer of power to an independent Indian government.

Amid the turmoil of political change, Pamela worked with student leaders, developed warm friendships with Gandhi and Nehru, and witnessed both the joy of Independence Day and its terrible aftermath. Soon afterwards, she was a bridesmaid in Princess Elizabeth's wedding to Prince Philip, and was a lady-in-waiting at the young princess's side when she learned her father had died and she was queen.Vivid and engaging, well-paced and superbly detailed, this witty, intimate memoir is an enchanting lens through which to view the early part of the twentieth century.

"Lady Pamela's memoir will appeal to those who like to take a peek into the lifestyles of the royal and famous." ( Booklist)

What listeners say about Daughter of Empire

Annoying lack of attention by the narrator

The text the narrator was reading, with regard to dates , were obviously written as, for example : 25 February, which is the modern way of typing a date rather than adding the superscript “th” , but the narrator chose to say “on twenty five February”..which no one would ever say in usual conversation, not in proper UK English anyway! One would always say on the twenty-fifth of February!!! So annoying because of the nature of the book there were a lot of relevant dates! Please can I have a job checking this kind of stuff as part of the editing process??? 😬

Everyone is handsome, rich and charming

I nearly didn't listen beyond the second chapter. The uncritical admiration of everything and everyone reminded me of 'Jennifer's Diary' in the Tatler. I was waiting for a 'but', but it never came, although there was a frank acknowledgment of her parents' affairs.

As I finished the book I realised that my expectations of it had been unrealistic. This is a daughter writing about her parents and she clearly wanted to put down her experience without engaging in the criticisms made of them. As long as you accept that this is the view you will get, the book is an interesting memoire. If you want to understand the Mountbattens, warts and all, Andrew Lownie's book will be more rewarding.

I'm an audible addict who has listened to her fair share of biographies. But I can honestly say this is one of the most interesting recordings I've listened to to date. If you love travel and abit of royal and social intrigue then this book won't disappoint. I only wish it was longer or had a sequel:)

Neither long nor boring! Fascinating

Where does Daughter of Empire rank among all the audiobooks you’ve listened to so far?

Wonderful snapshot of history from the perspective a very humble, yet privileged bystander. She spoke about the compliments/honors she was given as though she didn't deserve. She also included various scoldings which some authors may have left our of their biographies.

She read clearly and confidently throughout with a plain RP accent.

I neither laughed nor cried, however I felt glad that she had made her feeling about race very clear.

I have no idea why this book has just low ratings. its truly wonderful. I listened to the hold book in a few days.

I was thrilled to hear such an account, given so loyally and with love for the family to which she belonged. A beautiful historical account spanning so many huge events. A wonderful young lady. She must have been a treasure.

Could have been so much better

An interesting peek into one of the UK’s quirkiest, but one of the most influential and well connected genuine aristocratic families.

The links to the Royal family are interesting insightful and pleasant.

The partition of India is somewhat rose tinted though.

Overall definitely worth a listen.

Here is a completely decorous and highly affluent biography of a supremely beautiful, wondrous woman within the ornament of British high society. This audiobook is a delightful composition of elite adventure, authentic detail and the prettiest conditioning. The author, Lady Pamela Hicks, has a brilliant mind for detail and seemingly effortless ability to entertain majestic interests. I listened to her audible story over a pot of Afternoon Tea at consistent sessions by hour and chapter amazed at the sublime accommodation. Such work as is, in my estimation, excellent for sophisticated occasions. I am proud to have found this audiobook for accompaniment to my choice of polite setting and socializing. The narrator, Corrie James, does a marvelous work of pronunciation and intonation in her thorough support of a magnificent literature. Well done, highly recommendable audiobook on all accounts.

A MUST read if you love all things British!!!!

I have adored Lady Pamela Hicks for years, love watching any documentary with her in it. This book is wonderful, she has lived through soo much history (a front row seat in some cases). This book will definitely go into the re-listen category as I did not want her tale to end. I do hope that she writes another book about the second chapter of her life as I believe its just as interesting as the first part.

This book is long an boring, I struggled to get through the entire book. Read 2 books before I finished this one. Not interesting at all.

I wanted to like this. I wanted to know more about the Mountbatten family. The book feels as if it were written by a junior high school student. It isn't necessarily poorly written, rather it managed to make the life of the Mountbattend uninteresting. To be fair it might well have become interesting, it just couldn't stick with it.

A peek into history.

Lovely piece of history. From a personal point of view. Too much lord this and lady that. But, once she arrives in India it becomes much more interesting.

A wonderful book. Though I believe this book only scratches the surfaces of the fascinating life the Hon. Pamela Hicks. I’d absolutely adore being stuck next Mrs. Hicks on a long haul flight; the stories she could tell. It was an honor having a small window into the life of an extraordinary woman who witnessed such extraordinary historic moments.

Loved listening to the “Daughter of Empire”

I loved hearing Lady Pamela Mountbatten Hicks story. What an interesting time she lived it. Hard to even imagine. Having seen her several times on royal family documentaries in late life and reading about her parents unusual life I found it fascinating her take on it all. I wish it did not end so early in her long life.
I also found it interesting hearing the reality of some of the events portrayed on “The Crown” such as The Queens wedding, the Commonwealth tour the Queen and Prince Phillip embarked on and was cut short with the death of the King. The coronation. She was right there.
She lived a life a great privilege but also unusual events with unusual parents. Wonderful to read about with a front row to history.

Best book ever! So interesting...

Wonderfully written and performed. I hated for it to end. You're plunged into history! And you'll wish Pamela was your best friend.