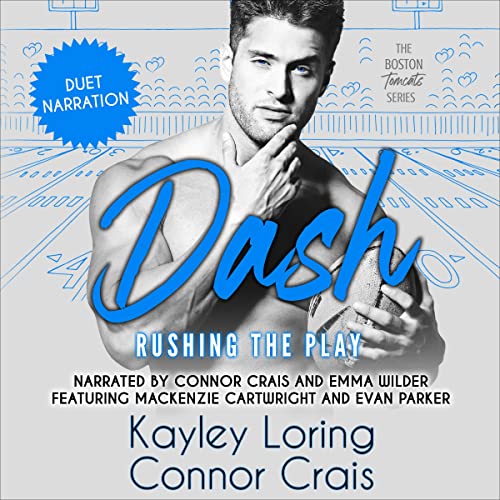 This tiny dancer doesn’t think I’m boyfriend material. I used to think that too. I’ve been a beast on the field and in the bedroom, but now I’m going to prove that I can be a man for her...and for our surprise baby....

See, I had a bad attitude my whole life, and that’s why my college coach sent me to take ballet lessons as punishment. The real punishment? Being taught to plié by a beautiful ballerina who refused to date me. Two years later, when we’re both professionals, I get a second chance to show her what Big D’s all about.

I thought I’d sack her by being the guy who can make his pecs dance to the beat of any song. But it isn't the other team’s offensive line who brings me to my knees, it’s a sophisticated hundred-pound ballerina. She sets me straight like no one else ever could.

I thought I was all about the smash and dash.

But getting Charlie Bardot pregnant changed everything.

This is a duet, multicast audiobook production!

What listeners say about Dash

Loved this book so much, warmed to the characters so easily and really enjoyed the story.

It was fabulous !!!! ,just the right spark !! the romantic side of Connor was well ill let you think x

I really enjoyed this book. Great story and great narration. Emma is a favorite of mine

The character development was strong, as was the story development. I loved the strength of the main characters, but also the friendships and family that surround them - they make the characters who they are and I love ‘em all.

Banter was awesome, strong story with conflict development and resolution was great and believable - a must-have for me.

And I loved the baby factor. There’s just something about a sexy daddy with big ass arms. Woo! All the baby and daddy stories. YUS.

Loved the voice acting. Everyone did a fantastic job - dude, I loved mama though and she stuck out to me lol. Well done, everyone.

Really good book. Just a couple of gripes…I wish Charlie’s character (and her mom’s for that matter) had been a little more likable. Also, I just don’t understand two people living together, having a baby together and professing their love for each other and still not talking about the “real” stuff. Further, reassessing life goals, adjusting priorities and making new dreams isn’t really rocket science. Overall, 4 star story. Super cute. Dash was the MVP, hands down. Narration team was exceptional!

This storyline was a bit alarming; but sadly, is an everyday occurrence for some; the feeling that one is not good enough. Had to revise review after listening to the entire book. Emma’s light Pebbles-like voice was a bit irritating after a while, but I guess fitted a ballerina. All four of the narrators did a great job with bringing characters to life.

Dash is my new fave💙

Welp Big D is my new favorite Tomkat💙 His growth from his first appearance in Decker till now is pretty awesome! He owns the sh¡t out of being boyfriend-y & husband-y…but his best role is Daddy D😍

Mixed feelings on this one

I love Kayley Loring's books and humor, this one did not quite hit the mark for me. The narration was excellent, Loved having the multicast feel to it. Something in the story feel a little flatter for me, it was enjoyable but not entirely memorable. The character of Dash was hard to warm up too, I liked him more in the first book and expected more from him. It's worth a listen just maybe not expect it to be in your favorites from this author.

Conner is a fantastic narrator. I barely could listen to the female narrator. I’ll never get another audible if she is the narrator, cringy.

I couldn’t listen to this book fast enough!!! I LOVED Decker and Charlie!!! Decker was such an asshole at first, but man did he ever redeem himself. I hope the the duo of Kayley Loring and Connor Crais keep writing together. I cannot wait for their next book!!!

This was such a fun, hilarious and entertainingly sweet sports romance with a surprise pregnancy and just the perfect amount of spice sprinkled throughout. If you’re looking for your next oversized football player to be brought down by a teeny tiny ballerina with just the right amount of sass, then look no further.

Connor Crais’ velvety baritone voice leaves your eyes fluttering and heart pumping. I absolutely loved his performance for all the different characters he voiced. The talent this man has to make them all sound different and being able to know who is talking at which time is astounding! The humor he brought to Dash had me laughing so hard I could not get enough. The jazz hands, baby names, text messages and pec dances left me in tears. I could definitely listen to Connor narrate the phone book for crying out loud. He has definitely moved up to the top of my list, and I can’t wait to dive into more of his work!

Emma Wilder was the perfect voice for Charlie (along with all the other characters she voiced). She brought the sweet and timid side of her to the forefront but also wasn’t afraid to bring the sass too. She has the uncanny ability to have you connect with Charlie and have you feeling the same emotions and situations she was experiencing throughout the pages. I could not get enough of the banter between her and Connor. They worked so well together and definitely made this story an enriching listening experience. Now I need to go check her back log and delve into more of her audiobooks!

Mackenzie Cartwright is amazing with the accents! She did such a phenomenal job voicing Hannah and Antonia. I have never heard of this narrator before but I am definitely going to be looking for other books she has narrated because the talent this woman possesses is astronomical!

Evan Parker is another narrator I’ve not heard before but my god what a performance he provided throughout this book! The inflection and talent in the way he spoke left me with goosebumps. Evan did such a phenomenal job in voicing all the different characters because he also was able to have them all sound completely different from one another and I was never confused on who was speaking at which time. Definitely going to keep my eye out for more of his work!

“Dash: Rushing the Play” is a sweet, funny, heartfelt and steamy rom-com football romance that left me with all the feels and the biggest smile on my face after I finished. Kayley Loring and Connor Crais brought their top play to blitz the literary gridiron with an amazing story that bullrushes its way into the end zone to win the game.

The timeline of the story was so perfect and one of my favorite ways to experience a new couple. We get to meet them as college kids and then as adults. The character development of Dash and Charlie exceeded my expectations and they have moved up to one of my favorite book couples. I love a big, carefree guy with a protective side and Dash was all of that and more. He truly went from a young man to a full on man who is husband material and a great father. Charlie is independent, smart and not afraid to go after her dreams. I loved these two together, their chemistry was off the charts hot. And there were so many laugh out loud moments that had me cracking up and smiling. The antics of the Taylor brothers and the Tomcats teammates are the cherry on top to this book.

Connor Crais and Emma Wilder were amazing as Dash and Charlie. I love that Connor narrated the character he helped create. This is one my favorite performances by Emma Wilder. I loved listening to her bring Charlie to life.