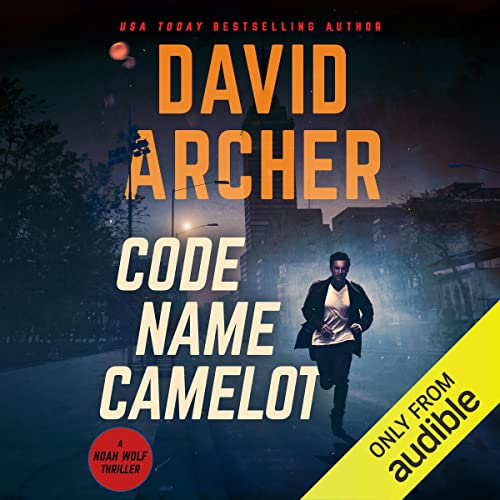 By: David Archer
Narrated by: Adam Verner
Try for £0.00

Framed for crimes he did not commit, he is sentenced to death by his own country....

Noah Wolf is quickly becoming one of the top names in the world of espionage. With well over one million copies sold and thousands of five-star reviews, this perennial USA Today best-selling series will be sure to keep your heart pounding well into the night.

After witnessing the murder-suicide of his parents as a child, Noah suffers from a form of PTSD that has left him without emotion, without a conscience, and without the ability to function as a normal human being. With the help of childhood friends, he learns to watch others around him and mimic their behaviors, in order to conceal the fact that his mind operates more like a computer that he has spent years programming. That program is what allows Noah to pass himself off as normal, by establishing parameters of right and wrong that are completely inviolable to him.

As a young adult, Noah finds structure in the US Army, and becomes an excellent and exemplary soldier, but when his self-imposed programming is put to the test by the murderous acts of the superior officer, Noah finds himself quickly made expendable, charged with crimes he did not commit and facing the possibility of execution. Without any reasonable hope for a reprieve, Noah's logic-based mind accepts his fate.

Sometimes, though, things are not all as they seem to be, and Noah is offered one chance to save himself. It was his disability, his lack of emotion, that made him the soldier he had become. Now, an ultra-secret organization known as E&E wants Noah's talents, offering him a chance to survive...as the most deadly assassin the world has ever known.

I always take my time when choosing my audio books, looking at all the reviews and looking what other people have purchased. So when i first found this book, i was unsure, so i addded it to my wish list for something to think about. But there was just something about it that kept playing on my mind, so i went ahead and downloaded it. How glad i am now. This was a very enjoyable listen, it had everything i like in this stile of book, action, a good plot and a great main character. Lets hope this is the start of a long series.

Would you try another book written by David Archer or narrated by Adam Verner?

Has Code Name: Camelot put you off other books in this genre?

No definitely not, I loved the last “Grey Man” (Mark Greaney) and “Victor” (Tom Wood) novels.

Yes the narration was ok.

If you could play editor, what scene or scenes would you have cut from Code Name: Camelot?

I gave up halfway through this book and to be honest I would cut everything after the prologue.

I might go back and finish listening to this one day but I would have to be quite desperate as there are so many far more accomplished writers in the genre:

Great first in a series

Liked this a lot! Narrator was great and it's well written. I loved the concept of Noahs lack of emotion too. Not loads of action in this novel, but it's because it's a great introduction to each character, and to the secret government department they now work for. Am eager to read the rest of the series now. More action hopefully be in the next lot of novels.

Good book to listen to.

This is a first rate performance from the reader and a vert interesting and entertaining book. A good way to while away the hours in the car.

The characters were straight out of central casting and no one is ever that nice to each other with nothing going wrong.

Loved it had great plot well paced. An excellent thriller written by David Archer rivals frederick forsyth James Patterson et Al. Adam verner brings the story alive. Would like this one to be a film on day far better than James bond or mission impossible

For anyone who has ever listened to Archer's Sam Pritchard novels you can appreciate the lack of foul language. For everyone else this book actually does contain some controversial scenes that quite surprised me for this author. The theme is a good one with the protagonist (Noah Wolf) posessong characteristics from many popular books out there today. This kind of reminds me a little of Brad Taylor's Logan/Cahill duo with a few exceptions that I can't mention without spoiling. I found the book to be a very light and fast paced, however I did think it lacked in authenticity. Again, this is fiction and with that being said the book did provide me with it's intended purpose, hours of entertainment. If you found this review helpful please indicate so. Thank You.

Code Name: Camelot is an absolute must listen espionage thriller. Noah Wolf is a man without human feelings who has been saved from a death sentence he received by court martial. He was innocent but a member of Congress wanted him dead. The woman who saved him is the leader of a US assassination agency which is so secret that only the US president is aware of it. Noah Wolf is assigned a 3 person team to help him. The name of the team is Camelot. Noah Wolf does not have human feelings but he understands them in him coldly logical way.

For those that liked the Sam Prichard series by David Archer (I reviewed 7 of the 8 audiobooks in the wonderful series here at Audible)) the Noah Wolf series is even better. The Kindle ebook version of Code Name:Camelot was released in January while the audiobook version was released on May 4. I could not wait so I had to read the Kindle version when it was released. The audiobook does not disappoint. Narration is very, very good.

Where is the action, the suspense, the thrill?!

DEFINITELY, not the action pack thriller I was expecting. Narrator is the only reason I finished listening to this.

Pretty good but not great

It's not often that the series opener in this genre takes it's time with the set up. 'Code Name: Camelot' spent 3/4 of its time dealing with how the main character got this job and how his team came together. I didn't really mind the different balance. Unfortunately, it led to a few too many talking head scenes that were frequently really on the nose. I found myself thinking, on more than one occasion 'real people don't talk like that'. I don't need a lot of depth in this genre, it's awesome when I get it, but it's not a requirement.

The biggest negative for me with this book was the reader. Mr. Verner always came across as a reader and not a performer. His cadences and speech pattern conspired to kept me from feeling like I was listening to the people talking; I was always listening to a guy reading a book. He did manage to give the characters different enough voices that I was never confused as to which character was talking. My favorite readers manage to bring a full characterization to each voice. Mr. Verner did not accomplish that.

I haven't decided if I'm going to listen to the next book yet. On the one hand it promises to be all action story and for all of the series I've gotten hooked on the writers tend to be better as they go along (unless they get distracted by hit TV series). However, Mr. Verner seems to be reading all of them.

The premise of the story is excellent. However, very little action: one mission. The action should have began in the first Act if you divide into 3 acts. Instead, it was at the end of a second act. Dialogue was repetitive, did not move the story along, was not how these characters would talk. Not witty, not clever. Needs a good story and dialogue editor. I hope the series continues with major revisions. Reading Mark Greaney, Robert Crais, Lee Child and others for story pacing and dialogue would help. Also, bad politician introduced at the start was never dealt with again. The old adage, "if you introduce a gun in the first act, you better use it by the third," was violated.

5 hours of listening to what they eat

boring op and more prep explaination than actual operation. starts with a strong idea and does not deliver

Not one of my favorites. No twists or turns. Little action. Very predictable. No depth.

very elementary writing. The reader was terrible. I will avoid both in the future. too many other good ones out there.

I got through 4 chapters before I couldn't stand it anymore. The writing is pedestrian. The female lawyer's character is obviously written by a man because a woman who got through JAG training would never be that emotional and weak.