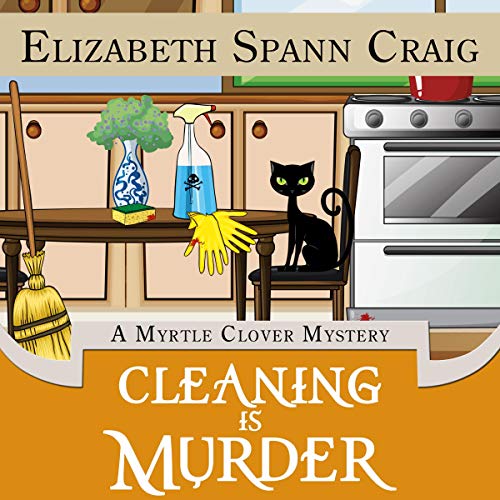 By: Elizabeth Spann Craig
Narrated by: Judy Blue
Try for £0.00

When Myrtle's housekeeper is a murder suspect, she swears to Myrtle that she's squeaky clean.

It’s easy for fellow citizens to get on your nerves in sleepy Southern towns like Bradley, North Carolina. Particularly when one of the citizens is something of a cheapskate.

Amos Subers isn’t one to tip waiters, pay back a loan, or behave generously with family. When it’s discovered that penny-pinching Amos was actually quite wealthy, it hardly engenders goodwill in the small town...in fact, he’s heartily disliked.

Octogenarian sleuth Myrtle Clover’s housekeeper is certainly no fan of his: Amos owes Puddin money for cleaning his house. It’s not too surprising when Amos is later found, murdered, in his kitchen.

Myrtle and her senior sidekick, Miles, resolve to track down the killer when Puddin becomes a prime suspect...and before the murderer strikes again.

What listeners say about Cleaning Is Murder

Clearing the way for a good book

I loved this mystery but it's not surprising as I have really enjoyed all of the books in this great series and at book 13 that is quite an accomplishment. This series shows no signs of losing its appeal, humour or even its creative plots and I am a captive audience. The reason I love it so much is the characters, they are just wonderful and as a group work so well together from the poorly sidekick, to the daughter in laws disastrous hobbies, to the son who has to sneak across to his mother's house for food because he doesn't want to upset the wife, the book club ladies and there disagreements of which book to read, all play a big part in why it is so much fun. The mystery was good and I liked that Puddin was the one in trouble, if like me you have been here from the start then you will know this character well and it was great to focus on her antics. I can't wait to make another trip to Bradley to catch up with my favourite Octogenarian and her sidekick.
It's hard enough to find a good cleaner in sleepy Southern town Bradley, so when you find one you hold on to them, no matter how bad they actually are. So when Puddin seems even more accident prone than normal, Myrtle does the unthinkable and asks her what's wrong. Only to find out that one of her other clients hasn't paid her and she is building herself up to collect her money from Amos. The problem is Wanda the Psychic predicts that Puddin is in danger but the warning arrives to late and Puddin walks in to find Amos dead. After a number of public arguments as she tried to get her money back Puddin is the number one suspect. If Myrtle doesn't want to lose her cleaner she, Miles, Wanda and even Puddin herself will have to prove Puddin innocent by finding the real killer, if only they could think like Sherlock Holmes.
I like the narrator and can't imagine anybody else playing the part of Myrtle and her friends. She sounds perfect and just how I imagine them.
I was given this free review copy audiobook at my request and have voluntarily left this review.

When Myrtle’s housekeeper, Puddin, finds the body of one of her employers in the house she was supposed to clean, she immediately calls Myrtle and Miles. They rush over to make sure there has been a death, and it certainly looks like murder. But to Myrtle’s dismay, her police chief son, Red Clover, believes that Puddin is responsible for the murder.

With psychic Wanda’s warning that this time it’s Puddin who is in danger, Myrtle drags Miles along to prove her housekeeper’s innocence. But Puddin seems determined to get arrested by spreading the news that the dead man owed her money. With Red looking into the murder, Myrtle must hurry to clear Puddin’s name before she ends up dead, too.

Cleaning is Murder takes a regular background character, housekeeper Puddin, and pushes her into the spotlight. Her stubborn determination to get her money lends suspicion to her character, but regular readers who know her from previous books will be sure of her innocence. But the murderer is fast on her heels to silence her, and as Myrtle meets new characters from the small town of Bradley, North Carolina, we get to piece together the mystery of Amos’s death and the reasons he met such an abrupt end.

This book is great for fans of the Myrtle Clover Mysteries books, but this is not the book to start with. Puddin is a regular character, and getting to know her before this book is a good idea. Still, if you’ve read a few of the books, this one will draw you back in to the small southern town atmosphere full of secrets and intrigue.

First, narrator Judy Blue has really warmed into this role. She's a pleasure to listen to.

Myrtle and her sidekick Miles once again end up involved in a murder.

The whole series is great. Book 13 so far is the best in the series. I can't wait for the next book

Fun with one problem

I like Myrtle and Miles, they are fun characters. I really enjoyed the narration, Judy Blue is my favorite narrator for this series. The story is pretty good too. The one problem I have is Myrtle’s disdain for Puddin. Its comes off as just plain mean. It’s not explained why she dislikes her so. Maybe it was in the earlier books? Overall, I liked the book and would recommend.

The narrators depiction of Myrtle has made me reexamine my previous negative review of these books. She has created a likeable character who by all accounts is an unlikable character on paper. Not an easy task I'm sure.

I really enjoyed listening to this Audible book, it was interesting and entertaining. Another adventure with Myrtle Clover 😊

I love the Myrtle Clover series of murder mysteries. This one was fun! The narrator was good. Miles is always a great side kick to Myrtle. Myrtle just keeps me laughing with her antics. The gnomes get to make a little appearance. Red is persecuted by his wife’s new change in their dietary habits. I enjoy the small town feel and the closeness of the main characters.

This is yet another fun and enjoyable book in the Myrtle Clover mystery series. I look forward to the next book.