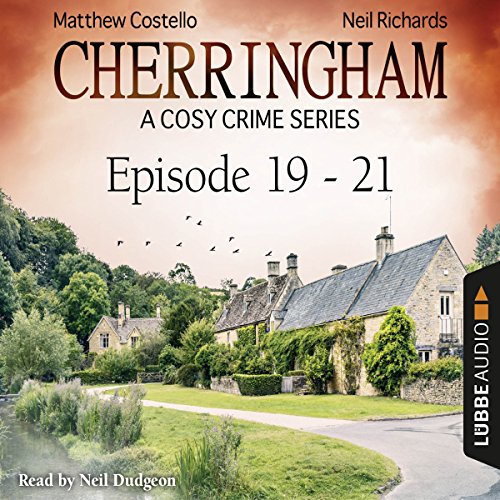 By: Matthew Costello,Neil Richards
Narrated by: Neil Dudgeon
Try for £0.00

Jack's a retired ex-cop from New York, seeking the simple life in Cherringham. Sarah's a Web designer who's moved back to the village to find herself. But their lives are anything but quiet as the two team up to solve Cherringham's criminal mysteries. This compilation contains episodes 19 - 21:

GHOST OF A CHANCE
Every Halloween, the supposedly haunted Bell Hotel hosts its famous 'Ghost-Hunters Dinner', complete with scary stories, spooky apparitions and things that go bump in the night. But this year's event ends in a terrifying accident, and suddenly everyone wonders... Is there a real ghost loose in the hotel? Jack and Sarah are convinced that the culprit must be human: who would want bad things to happen at the classic hotel? But soon they're forced to confront their own superstitions as they find themselves on the trail of an unsolved Victorian murder...

FOLLOW THE MONEY
Claire and Terry Goodman seem to have everything. Successful business. Son at Oxford. New mansion right on the River Thames. And seemingly... plenty of money to spend. But when Jack and Sarah are asked to investigate an odd robbery at their home, secrets start to emerge. And as the truth is revealed, for someone it will be too much to bear, and murder may be the only way out.

MURDER MOST WILD
When the Zakro Corporation attempts to build a mammoth supermarket outside Cherringham, the whole village is up in arms. But the accidental death of the lead environmentalist, Sam Lewis seems to hand victory to the developers. Could Sam's opposition to the project be the real reason he died? When Jack and Sarah take on the case, they will learn that what was an accident was - in fact - one very wild murder.

Set in the sleepy English village of Cherringham, the detective series brings together an unlikely sleuthing duo: English web designer Sarah and American ex-cop Jack. Thrilling and deadly - but with a spot of tea - it's like Rosamunde Pilcher meets Inspector Barnaby. Each of the self-contained episodes is a quick listen for the morning commute, while waiting for the doctor, or when curling up with a hot cuppa. For fans of Agatha Christie's "Miss Marple series", Lilian Jackson Braun's "The Cat Who series", Caroline Graham's "Midsomer Murders", and the American TV series "Murder She Wrote", starring Angela Lansbury.

What listeners say about Cherringham - A Cosy Crime Series Compilation

This felt like a long time coming but it was worth the wait as Sarah and Jack are back on top form once again. I doubt anyone will be starting the series here so you know what to expect but I did love the hint of something more in their relationship, the slightest touch of romance maybe?

Fingers crossed we won’t be waiting months again for the next chapter, I get very jealous of my German friends getting it so soon as they are books ahead!

I read a few of the reviews before purchasing this - not that I needed to be convinced, I enjoy every story. However, these 3 felt a bit 'ordinary', not fully fleshed out and in the first one, hardly credible.

As for the other 2, I don't know if it is me, but they had more of a short story, hurriedly finished, feel about them. The last one - who set the fire? The second one - (well I can't ask that question without spoiling the tale). Normally, there's more to the narrative, but not on this occasion.

A couple of reviews said something about Jack and Sarah's burgeoning relationship! I didn't see it! I could be wrong, but it just didn't seem that anything extraordinary was going on. Time will tell. But I would say: "Move along now. Nothing to see here."

If you're already a Cherringham fan, this is still good value for money. But it's just, ordinary.

I have listened to all the Cherringham mysteries and they just get better and better. I love Neil Dudgeon's American accent and find his narration wonderful to listen to as I drift off to sleep at night. The only problem is that I stay awake far longer than I should in order to hear the story progress! I can't wait for the next set of stories to be released and really hope that romance could be in the air!

loved it. Always in suspense while listening. I never guess who done it. Now for the next one.

I get immersed on the characters bought to life by Neil Dudgeon. anothet fantastic compilation

Series running out of steam perhaps?

I have thoroughly enjoyed this easy listening series. The cast of characters memorable, the reading excellent, the storylines very clever bearing in mind each episode's short duration. The last compilation wasn't quite the 5 stars I was used to and nor is this. Its an enjoyable listen but the storylines are not quite as interesting, the dialogue and detail not quite as good. Perhaps this is just a little blip but sadly perhaps this very excellent series is running out of steam. I like it so much I shall download the next nevertheless and hope we're back on track!

love this series of books

The Cherringham compilations are a great easy listen. I have so many of them I'll be upset when they finish!

Sarah and Jack are fantastic characters and I am really involved with their lives. The stories are all interesting, varied and worth listening to. Neil dies a great job with the narration.

Always get the audio books ..... Great to help pass the time whilst doing work

Another brilliant set of Cherringham tales read by Neil Dudgeon. I would award 6* if I could.

I found the Cherringham Cosy Crime series quite by accident, then binge listened from 1-18. I could see the German versions (why do they make a German recording of an English mystery before an English one?!) of this series beyond 18. I was waiting impatiently for the English recordings to catch up and was delighted to see 19-21 released a few days ago.

So good to "see" the friends in Cherringham. True to the tone and history of the series. If you are a Cherringham fan, definitely get this audiobook.

they whole series is great. I've purchased all and I would purchase 21 more. please keep the series going.

Still love this series. It's frustrating to see the English versions lag behind those in German! I may start German lessons.

I thoroughly enjoyed the series and Neil Dudgeon does an excellent job bringing the characters to life. I've always thought that actors make the best narrators and it's certainly true with Mr Dudgeon. After watching him in "Midsomer Murders", it's easy to picture him as a detective. I look forward to future episodes in this series.

I love these stories - they are like an audio version of a comfy favorite shirt. The characters are known, yet are evolving, and the town and countryside and seasons feel familiar.
The stories and narration make these worthwhile entertainment.

Not the strongest entry

I genuinely like the Cherringham series and am glad I purchased this.

It is not, however, the strongest set of stories in the series. The characters seemed a bit flat compared to the earlier stories. The mysteries, while still good, were not quite as well plotted as the previous ones. The vague hints of romance were disappointing, honestly. The friendship between the lead characters was nice touch...turning it romantic just seems unnecessary.

I do like the series and I will buy more if they write more. I was just a bit underwhelmed by this installment.

is fun, great characters, and the narrator is terrific! I've listened to them all twice. can't wait for the next installments.

Coziness for Either Side of the Pond

I own every one of the Cheeringham short "Cozy"s and I love them all. I listen to these stories on Bluetooth as I cook, clean or create. These are everything I believe a Cozy should be: well-written, weaving a rich tapestry that makes me feel as if I am a part of the community that is Cheeringham and, above all, I feel right at home. My teen-aged progeny don't seem to mind them either because they spend a little more time just "hanging out" around me when I am listening to Neil Dudgeon bring the characters to life in my own living room. --And that's saying something!

I admit it. I love ALL the Cherringham stories. The reader, Neil Dudgeon, is perfect for this series of light mysteries. The stories are not very complicated, easy to follow and easy to listen to. Sarah is a believable character, actually the whole cast is except for.... the retired NY Cop. I know, he's the center of the stories. But something about his character is sometimes jarring. Aside from that bit of pickiness on my part these are fun. I like that new stories pop up from time to time. If you, like me, listen to these cozies only occasionally, try this series.

They are at it again!

Great books! I have enjoyed them ALL.
Once again I almost bought the next book in German. which I do not speak fluently at all! I actually bought one by accident already. Be careful that you look closely when you buy. They look Very similar!