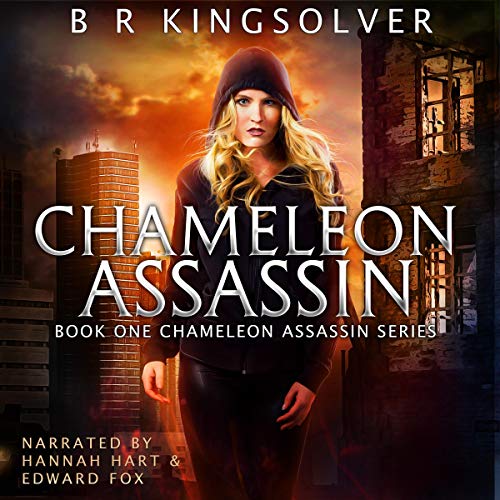 By: BR Kingsolver
Narrated by: Hannah Hart,Edward Fox
Try for £0.00

Libby is a mutant, one of the top burglars and assassins in the world. For a price, she caters to executives’ secret desires. Eliminate your corporate rival? Deliver a priceless art masterpiece or necklace? Hack into another corporation’s network? Libby’s your girl.

Climate change met nuclear war, and humanity lost. The corporations stepped in, stripping governments of power. Civilization didn’t end, but it became less civilized. There are few rules as corporations jockey for position and control of assets and markets.

In the year 2200, the world has barely recovered the level of technology that existed before the ice melted and the subsequent wars. Corporate elites live in their walled estates and skyscraper apartments while the majority of humanity supplies their luxuries. On the bottom level, the mutants, the poor, and the criminals scramble every day just to survive.

What listeners say about Chameleon Assassin

I have waited for this title for what seems like years! It did not disappoint and was really enjoyed...Now...what about the other 4 books? Soon please?

The Urban Fantasy that the World Needs

BR Kingsolver has pushed all my urban fantasy buttons with this post-apocalyptic fantasy series. The characters are well developed, gritty, and relatable. The plot is gripping and she avoids the obvious pitfalls of over used tropes creating a vibrant world that I literally cannot wait to read more about. I get nervous when there are multiple narrators but these two did a great job and the editing makes it feel seamless. If you are into these books check out her Dark Streets series.

This is my first book by this author and I'm impressed. The story is entertaining with an interesting story and a well crafted world for the characters. I really enjoyed this book and look forward to the next book in this series.

I had to leave a review

Okay, I almost never write reviews but I almost didn’t get this book because the reviews seemed so low. I recently discovered these narrators on another series and loved them. So I listened to the sample and it seemed fine so I bit the bullet, held my breath, and used my credit on it. I am so glad I did! I had never read or listened to BR Kingsolver before and I am looking forward to reading and listening to more. I loved the narration. In fact, If I had one negative to say about this book it’s that there are a lot of character with long names and it can get a bit confusing. But Hannah Hart and Edward Fox are so good at playing all the characters that they make it easier to follow the story. Anyway, maybe I’m biased because I already really liked the Wolf Ridge series but I loved this book and am seriously looking forward to the next.

the author clearly doesn't know how to define a scene. the narrative jumps from one topic to the other without giving the reader time to think. the female narrator also has weird inflation to her words that became grating. she also giggles while reading, to add emotions, I guess?. I never thought hearing someone smile would be this annoying. it's not obvious but annoying all the same.

best dual narration I have heard

creative take on the future. love the dual narration. not very bloody/gory. most of the violence to is over quickly.
i liked it enough to purchase the rest of the series.

Excellent book! the story is fabulous!

The book and story are excellent! I loved it. Hannah Hart read the story better than her counterpart Edward Fox. The male voice sounded much the same to me when doing different characters. this was annoying when there were multiple male parts to be played. However, both did have wonderful reading voices to listen to throughout the story.