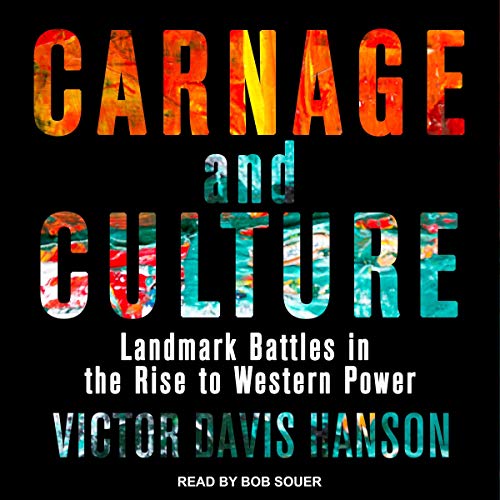 By: Victor Davis Hanson
Narrated by: Bob Souer
Try for £0.00

Examining nine landmark battles from ancient to modern times - from Salamis, where outnumbered Greeks devastated the slave army of Xerxes, to Cortes' conquest of Mexico to the Tet offensive - Victor Davis Hanson explains why the armies of the West have been the most lethal and effective of any fighting forces in the world.

Looking beyond popular explanations such as geography or superior technology, Hanson argues that it is in fact Western culture and values - the tradition of dissent, the value placed on inventiveness and adaptation, the concept of citizenship - which have consistently produced superior arms and soldiers. Offering riveting battle narratives and a balanced perspective that avoids simple triumphalism, Carnage and Culture demonstrates how armies cannot be separated from the cultures that produce them and explains why an army produced by a free culture will always have the advantage.

What listeners say about Carnage and Culture

Wow! This truly is a great book. A rarity!

Superbly researched and factually detailed with brilliant analyses of landmark battles. In a word: Brilliant!


Culture and territory is at the root of all wars, so this is a good title.

If you have any interest in military history at all you must read this book.

I'm glad VDH wrote this insightful book when he did - couldn't be published today.

This book should be required reading for anybody who fancies themselves a scholar of Western civilization. Dr Hanson makes a very compelling case for the success of Western style warfare and identifies those crucial elements that define the western freedom.

Bad Hypothesis with No Facts.

I had heard about this book at one point during my Master’s coursework (Military Studies), and had written it down to read later as I presumed there would be some interesting notes on how Western culture has influenced a tendency towards seeking “decisive” battles (even though this term is often conflated).

Well, this book hits you pretty quick with the notion that it is not a proper academic or scientifically-approached work, and it really seems as though the author had proven his own hypothesis in his mind, and cherry-picked a few battles (9) to try and prove his point, and ignored the possibility of any others. To put the bottom line up front, the ideas in this book would in no way stand up to any sort of peer review, nor could it really stand up to someone else picking a different set of 9 battles to prove the exact opposite. The author’s ideas are simply impossible to put forward in an intelligent manner, especially the way he is doing so here.

The book barely even grounds its facts in any real history. I couldn’t even get through his first case study (the battle of Salamis); the author treats the Greek people as if they are one collective societal/cultural organization, and he speaks often and loudly of their democratic and individualistic government, where every citizen has an equal vote and say in the law. Any precursory review of Ancient Greek history can show you that the Greek city-states were many, and that they possessed varied sets of governments and societies, many of which were absolute monarchies. How can he really be speaking of these nuanced qualities when referring to Athens, Sparta, Corinth, Thebes, Boeotia, or any of the other hundred city-states? He seems to really only be describing the Athenian government in this case study, but even that which he describes only existed for short periods of time, as Athens also had her fair share of monarchies and tyrants. I couldn’t possibly take his assessment of the Greek people seriously, as it was evident he has no proper understanding of Greek history, and I therefore doubted very seriously that any of his other case studies in this book could have been properly researched.

Even his introduction had me feeling wary, as he opens his book with an aggressive anti-apologetic tone, trying to dismiss any potential critics who could try to poke holes in his hypothesis. As if that could be shored up. At one point I think he even tried to point at the “barbarous” Aztecs who slaughtered their own people in religious ceremonies (because Westerners never did this?) in some weird attempt to show the superiority of Western culture, and this line of attack had me already wondering what the hell I was about to read. Either way, there is nothing he can say in defense of his hypothesis, other than the fact that it is truly ridiculous.

If he had maybe approached this with some sort of comparative analysis between Western vs Eastern military theories (say, Sun Tzu vs Clausewitz), then maybe a discussion could be had, and was what I was expecting. But nope, he really just goes full retard right from the get-go. Again, he doesn’t even have his history right, so how can we even begin to take his case study analysis seriously? There’s no wonder why he doesn’t use any methodology: he could never get this work across as anything other than ridiculousness.

Save yourself the trouble and the money, and pass on this one.

An Overview into Western Warfare

This was a wonderfully constructed Erocentric view on the culture and tactics of Western arms. As usual Hanson's adds his wonderful personal touch to examine the historic and cultural origins of Western military prowess.

VDH brings more than battle or war to anyone interested in history; but a even handed must read for those who don’t mind hearing both sides of an unpleasant subject. Not a coffee table book for show!

Should be required reading for all intelligence analysts and state department personnel. Even more relevant in today’s fractious political climate.

loved every second of it. also believe that this book is very important to read for students these days. Especially humanities students! this book builds partly the groundwork of understanding Western culture! loved it and on to Hanson his other books now!