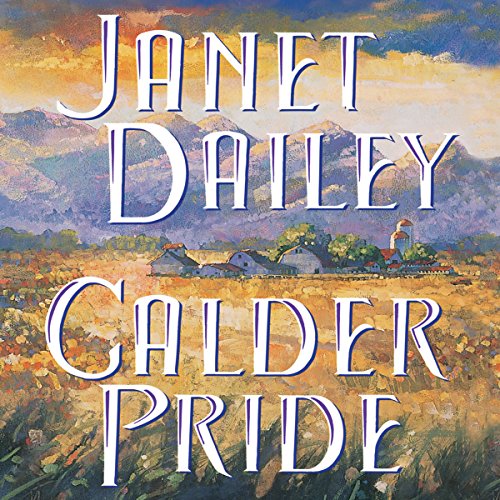 By: Janet Dailey
Narrated by: Judith Ivey
Try for £0.00

After 15 years Janet Dailey returns to the beloved Calder clan in this long-anticipated addition to the best-selling Calder series!

Cat is a Calder through and through: proud, headstrong, intelligent, and extremely beautiful. When her fiance is accidentally killed, she retreats to the family homestead to mourn, vowing never to give her heart to another man. But one reckless night with a handsome, gray-eyed stranger changes her life forever, and gives her a son with striking gray eyes.

Cat decides to raise the son on her own, but the town treats her as an outcast when they learn she is an unwed mother. Cat is gossiped about meanly, and it takes all her pride to hold her head up and ignore it.

But Cat cannot ignore the new sheriff. It isn't his rugged good looks that cause her heart to skip a beat when he first arrives in town, it's his striking gray eyes. It seems impossible, but the man she never thought she would see again is now part of her life. Will he notice her son's eyes and figure out what she vowed never to tell him? Cat finds herself torn between her promise to her first love and powerful, unexpected feelings for her child's father. With her family standing firmly behind her, and her son's future in her hands, Cat must decide: Will she take a chance on a new, true love?

Wonderfully romantic, and as sweeping as the Montana plains, Calder Pride will delight and satisfy Janet Dailey fans, both old and new.

"This update on the Calder family shows Dailey gamely back on the horse and riding well." ( Publishers Weekly)

What listeners say about Calder Pride

loved the book when I read it so I bought the audio book. The reader grates at you, it was so bad I stopped the book. This is the first time this has happened to me. Her southern accents are really bad.

She ruined the audio

Was Calder Pride worth the listening time?

no because of the reader

the audio should be redone with a new reader

Story good, narration and music not so much

The was the women makes male voices, especially Chase, is a bit awful! And the added music wasn’t necessary.

Things have been righted finally since replacing the past narrator. It took a lot of complaining by the loyal Calder Series fans, but we got it done!

I couldn't listen to the poor narration. I love the storyline so I'll just have to read it myself.