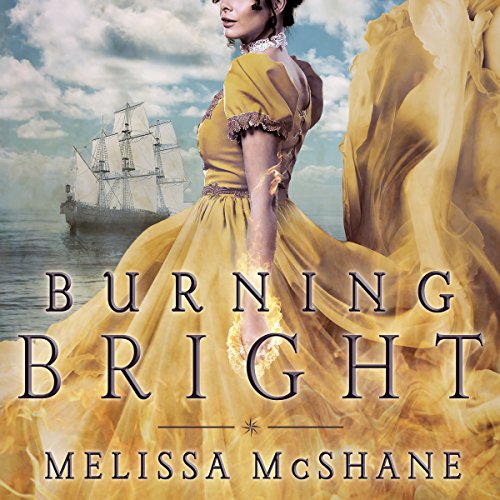 By: Melissa McShane
Narrated by: Cat Gould
Try for £0.00

Elinor is an Extraordinary and the only one in England capable of wielding fire in over 100 years. As an Extraordinary she is respected and feared, but to her father she represents power and prestige for himself. Mr. Pembroke, having spent his life studying magic, is determined to control Elinor and her talent by forcing her to marry whom he chooses, a marriage that will produce even more powerful offspring. Trapped between the choices of a loveless marriage and living penniless and dependent on her parents, Elinor takes a third path: She defies tradition and society to join the Royal Navy.

Assigned to serve under Captain Miles Ramsay aboard the frigate Athena, she turns her fiery talent on England's enemies, French privateers, and vicious pirates preying on English ships in the Caribbean. At first feared by her shipmates, a growing number of victories make her truly part of Athena's crew and bring her joy in her fire. But as her power grows and changes in unexpected ways, Elinor's ability to control it is challenged. She may have the power to destroy her enemies utterly - but could it be at the cost of her own life?

What listeners say about Burning Bright

Unbelievable Cat Gould makes a living narrating audiobooks. Who is it auditions this person and gives her work. This woman cannot read out loud, her way of speaking is monotonous with no variation at all.
I cannot listen to this. Absolutely awful.

I liked the story but not the narrator

It's a nice story, the characters are interesting and the plot makes sense, but I had trouble enjoying the book because of the narrator. Her reading style is very stiff and all the characters seems unnatural and very same-same in her way of telling the story. I will not purchase any more audio books narrated by Cat Gould, although I will buy future publications from the author, Melissa McShane.

Let down by bad narration

Great story but the narrator is extremely off-putting, would enjoy more by this author though.

i absolutely loved this story! The author and narrator were both new to me and ao i did not know what to expect and was pleasantly surprised! I love historical romances and this had an aspect of paranormal in the story with Elinor discovering her talent and embarking on her adventure. it is a clean romance and is a slow burn for them discovering their love bit it was absolutely perfect for the story. I wish this was a series so I could read more about it. Cat Gould as the narrator just brought the story to life. she was amazing with all the male and female voices and i loved her accent used for the narration! i definitely recommend getting this along with the audio!!!!

On the surface this book appealed to me. I love *good* regency/historical fiction, well written sci fi/fantasy is always a win with me and Cat Gould narrations are always on point.

Premise- 5 stars, the idea that there are "gifted" people that were involved in historical British navel battles? I'm on board. (pun not intended)

Historical Accuracy - 3.5? I'm not an expert but there was no offensive/unrealistic history in this story, she just added the fictional premise.

Story Content - 3 stars. This is where it started crumbling for me. Pretty bland, basic story of NAVEL BATTLES. How does that happen? I blame it on no mid-story development and the poor 'blending' of the fictional sci fi elements with the historical timeline.

Character Development - 2 stars. My biggest pet peeve. A good idea with a weak plot can still be a win for me if the characters are well developed. The heroine had typical emotions but I never connected with her. I don't need a play by play but I need the author to make me believe in what she feels. The side characters had even less development. To the point that I actually didn't realize who her best friends were until the middle of the book. The romantic line? One great meet-cute at the beginning, a couple minor, unassuming moments in the middle and suddenly they are extremely in love at the end.. (insert eye roll here).

Narration- 4 stars. Cat is one of my go-to readers, however I feel that the lack of low & high story points & the limited character development crippled her performance a bit.

Overall, if you are looking for a clean regency/scifi/fantasy novel to play while you are working for 13 hours it will make you happy. I'm returning it because, while it was good enough for me to finish, I won't listen to it again.

Definitely. I've gotten so little done because of it.

I read/listen to a _lot_ of 'strong female paranormal romanceish' books. So many that I often find plots to be predictable. This book was a breath of fresh air. There are, of course, a few obvious tropes, but there were as many if not more exciting twists and turns.
The lead female didn't suddenly become helpless when encountered with a strong male, if anything they support and encourage each other in a sold friendship. Great characters, great story. I'm keeping my fingers crossed that there will be another soon.

Would you listen to Burning Bright again? Why?

This was a captivating read with a strong female protagonist and wonderful story telling. At first I wasn't sure of the narrator, but within a chapter or so I really liked her. Too many new/younger adult type books have syrupy sweet young voices that are so irritating - this narrator was more mature and more fitting with the character. I am definitely looking forward to more audiobooks from this author.

I read this book with kindle and whispersync, so I only had to listen to the narrator for a few chapters here and there, otherwise, I may not have finished the book.

The story was refreshing and touched on some fantasy/sci-fi with their abilities. I enjoyed this historical fiction BUT the narrator's voice was extremely grating and was a struggle to listen to.

This was a very action packed book with never a dull moment. I only wished for a better narrator.

I truly loved the story, the twist made it very interesting. If you like a little fantasy with adjusted history, this is the adventure romance for you. I can not wait to get my hands on the next in the series. Sorry I hate giving away a story so no details here.

struggled to keep my attention. The accent and language got on my nerves. the performance was good just not for me