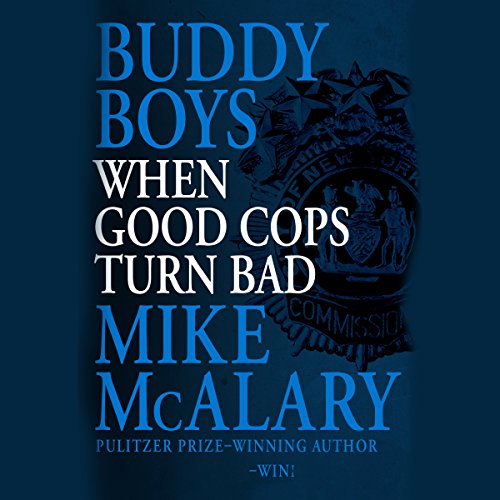 By: Mike McAlary
Narrated by: Dan Triandiflou
Try for £0.00

A shocking true story of corruption and crime in the ranks of the NYPD in the worst police scandal since the revelations of Fred Serpico.

In the 1970s, New York City's 77th Precinct was known as "the Alamo". In Bedford-Stuyvesant and Crown Heights, Brooklyn - neighborhoods notorious for drugs and violent crime - some of the worst criminals wore police uniforms and carried badges. Henry Winter was a good cop when he first entered the infamous 77th station house, which was already infamous as a home to the dregs of the NYPD. Before long he and fellow officer Anthony Magno found themselves deeply entrenched in the Alamo's culture of extortion, lies, corruption, and crime - and they were regularly supplementing their incomes by ripping off thieves, drug dealers, junkies, and honest citizens alike.

But the gravy train couldn't stay on the rails forever. Winter and Magno were caught and faced a devastating choice: They could betray their crooked friends and colleagues by helping investigators expose the rot that festered at the Alamo's core - or spend the next several years behind bars.

In Buddy Boys, Pulitzer Prize-winning investigative journalist Mike McAlary blows the doors off one of the worst scandals ever to taint New York's uniformed guardians, the men and women sworn to protect and serve the populace. Blistering, shocking, and powerful, it's a frightening look inside the NYPD and an eye-opening exploration of the daily temptations that can seduce a good cop over to the dark side.

What listeners say about Buddy Boys

even if this wasnt and true story, it would still be a great story. great book!

Really enjoyed this audiobook, well performed and the story kept me gripped.

I heard about Mikey Dowd and the 75th precinct this scandal happened at around the same time. it's interesting to see how so many policemen became corrupt. men who saw themselves as good people and rationalized the crimes they committed.