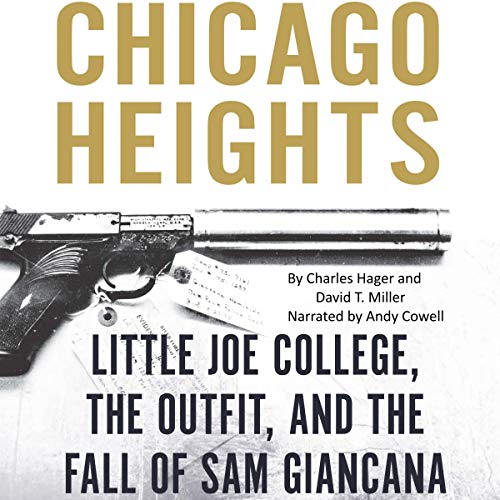 In this riveting true story of coming of age in the Chicago Mob, Charles “Charley” Hager is plucked from his rural West Virginia home by an uncle in the 1960s and thrown into an underworld of money, cars, crime, and murder on the streets of Chicago Heights.

Street-smart and good with his hands, Hager is accepted into the working life of a chauffeur and “street tax” collector, earning the moniker “Little Joe College” by notorious mob boss Albert Tocco. But when his childhood friend is gunned down by a hit man, Hager finds himself a bit player in the events surrounding the mysterious, and yet unsolved, murder of mafia chief Sam Giancana.

Chicago Heights is part rags-to-riches story, part murder mystery, and part redemption tale. Hager, with author David T. Miller, juxtaposes his early years in West Virginia with his life in crime, intricately weaving his own experiences into the fabric of mob life, its many characters, and the murder of Giancana.

Fueled by vivid recollections of turf wars and chop shops, of fix-ridden harness racing and the turbulent politics of the 1960s, Chicago Heights reveals similarities between high-level organized crime in the city and the corrupt lawlessness of Appalachia. Hager candidly reveals how he got caught up in a criminal life, what it cost him, and how he rebuilt his life back in West Virginia with a prison record.

Based on interviews with Hager and supplemented by additional interviews and extensive research by Miller, the book also adds Hager’s unique voice to the volumes of speculation about Giancana’s murder, offering a plausible theory of what happened on that June night in 1975.

What listeners say about Chicago Heights

Thought it was an excellent read. Slow to begin but absolutely necessary to show how easy it was to end up working for mobs/gangs. Would have liked a little more about places in Chicago - but story rightfully sticks to gang members rather than places.

We need more narrators like this guy. Very good pace and really made me think.

Well written and a great story. This was eady to follow and one of those books you cant put down

Really good book, worth the read for sure! I grew up hearing all these guys names. Chicago heights has a lot of history. Rest In Peace to my uncle Dego Tony 🙏🏼

I thought it was Great!

I've read up on the mob quite a bit. After a while things seem to correlate amongst tales. Little Joe College seems to tell a a real tale. Absolutely worth a listen!!