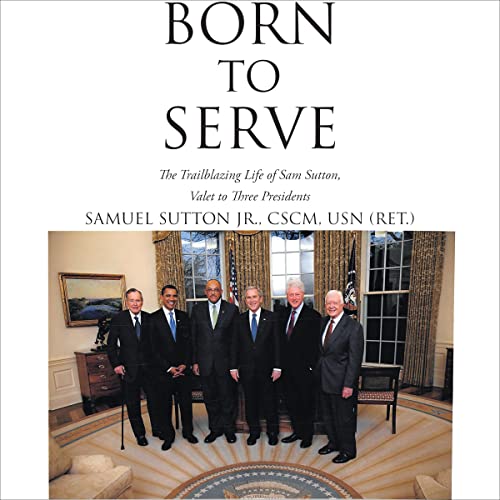 Samuel Sutton Jr. grew up poor in Kinston, North Carolina. His childhood home had no central heat or hot water. He and his family walked seven miles roundtrip to church every Sunday because they didn't have a car. To help out, Sam picked tobacco during his summer vacations, starting at age 10.

But Sam was to rise far in life from these humble beginnings. Joining the Navy in 1979, he embarked on a 30-year military career, serving first as a sailor, then as an enlisted aide to the nation's top admirals and generals, and finally as a personal valet to presidents Bill Clinton, G. W. Bush, and Barack Obama. He worked a backbreaking schedule, juggling multiple tasks in a position that made him a virtual member of the First Family, an eyewitness to their public and private lives.

Born to Serve is also a cautionary tale about the complex dynamics of race and politics at the highest levels of the military and government. From his first day as valet, Sam's close proximity to the president made him a target for those who craved access to the most powerful man in the world. That competitive pressure would prematurely end Sam's career as valet, but he went on to write a new chapter in his life by adopting a child out of the foster care system, guiding him in overcoming a difficult past, and raising him into a fine young man.

Told with candor and warmth, this is the story of a man who overcame significant adversity to serve his country with tireless faith and dedication.

What listeners say about Born to Serve