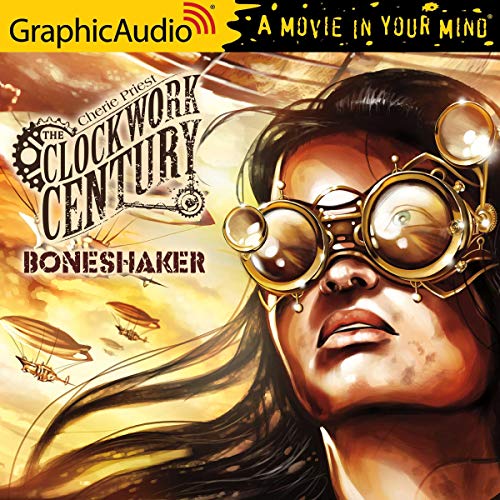 In the early days of the Civil War, rumors of gold in the frozen Klondike brought hordes of newcomers to the Pacific Northwest. Anxious to compete, Russian prospectors commissioned inventor Leviticus Blue to create a great machine that could mine through Alaska’s ice. Thus was Dr. Blue’s Incredible Bone-Shaking Drill Engine born.

But on its first test run the Boneshaker went terribly awry, destroying several blocks of downtown Seattle and unearthing a subterranean vein of blight gas that turned anyone who breathed it into the living dead.

Now it is 16 years later, and a wall has been built to enclose the devastated and toxic city. Just beyond it lives Blue’s widow, Briar Wilkes. Life is hard with a ruined reputation and a teenage boy to support, but she and Ezekiel are managing. Until Ezekiel undertakes a secret crusade to rewrite history.

His quest will take him under the wall and into a city teeming with ravenous undead, air pirates, criminal overlords, and heavily armed refugees. And only Briar can bring him out alive.

I have read the whole Clockwork Century series and now listening to it through this Dramatized Adaptation I can bring the story back to life again. And this time in a totally different way. I never wanted to stop listening to Boneshaker.

Unsure if the paper book suffers from this as well but the dialog in thia version was uninteresting and flat. A cool setting but I feel many other writers could have done the premise a better service.

Excellent way to enjoy a favorite

Loved experiencing a classic in such a unique and wonderful way. The tagline of "Movie in your Mind" is pretty accurate, as the voice talents and sound design does a lot to help you picture events as they unfold. I've already purchased and listened to much of the sequel and am happy to find consistent quality.