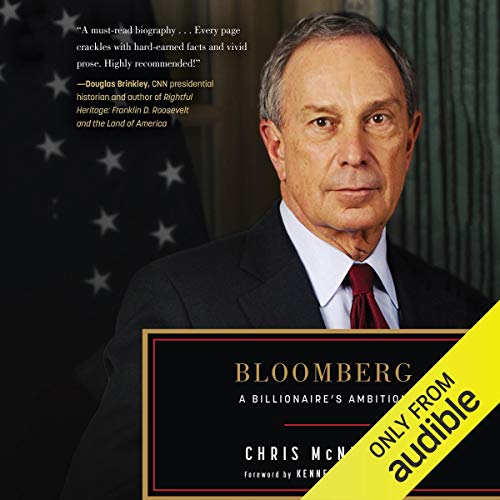 By: Chris McNickle
Narrated by: Fajer Al-Kaisi
Try for £0.00

Examine the bipartisan legacy of a remarkable billionaire politician

Bloomberg: A Billionaire's Ambition tells the story of how one of America's most successful entrepreneurs was elected mayor of New York City and what he did with the power he won. Bloomberg's stunning victory against all odds just weeks after the 9/11 terrorist attack left him facing challenges unlike any mayor in history. For the next 12 years, he kept the city safe, managed budgets through fiscal crises, promoted private sector growth, generated jobs, built infrastructure, protected the environment, supported society's cultural sensibilities, and achieved dramatic improvements in public health.

Bloomberg was an activist executive who used government assets boldly and wisely for the greatest good, for the greatest number of people. His time as mayor was not without controversy. Bloomberg supported stop and frisk police tactics that a judge ruled unconstitutional, and jailhouse violence rose to levels so severe the federal government intervened. The administration's homeless policies were ineffective. And he forced a change in the city charter to allow him to serve a third term.

Overall, record low crime and the lasting impact of innovative policies will cause his tenure to be remembered as a remarkable success. Having returned to his global media empire, and to his private philanthropy, Bloomberg continues to challenge the National Rifle Association on gun control, promote national education reform, and support policies to combat climate change. Frequently touted as an independent candidate for president, Bloomberg leaves behind a legacy of effective government.

What listeners say about Bloomberg

I rated everything five stars but because it's an Audible book...I'd just make one comment. There are so many ways to check pronunciations on the internet. Fajer Al-Kaisi was probably not familiar at all with two of the things that were mispronounced
so I did not want to change it to 4 stars because overall his performance was terrific!!
Al Kaline is an American baseball player...it's pronounced like K-LINE.
Lubovich was another word. No worries at all. We knew what you meant.