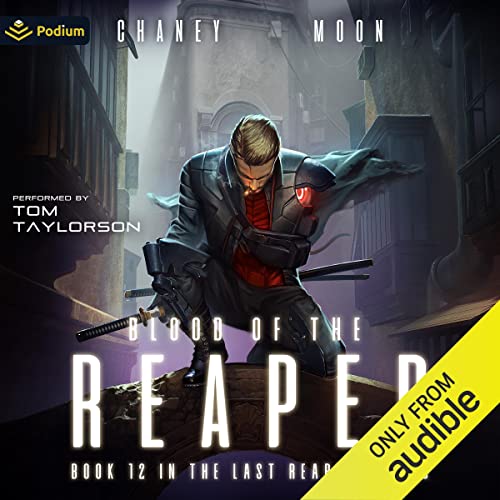 Blood of the Reaper

Damaged beyond repair, Halek Cain turns to the one person who can rebuild him from the ground up.

Will it be enough to face the mad general sending a clone army after him? Ultimate victories take ultimate sacrifices, and this time defeat means annihilation.

Cain and his friends must find their way to Oroth, locate Elise and her ragtag army of desperate heroes, and face a dark threat no one understands. He has come a long way since death row. This will be his greatest challenge yet, but he’ll do it with old friends, new weapons, and technology like no Reaper before him has been able to wield.

Experience the 12th entry in Halek Cain's epic quest to save his friends in the Last Reaper series. If you're a fan of gritty combat, snarky AI's, and a hero who just won't quit, this one might just be for you.

What listeners say about Blood of the Reaper

I love this series. So very hard to wait for the next book in the series. I love the way its been brought back to life by the author.

So glad to hearAleeza’s voice again!
This adventure was exciting this time. Really looking forward to the next one. Hopefully they’ll all be together again.
Tom great job!

What a great voice actor. The way he’s able to get into character outmatches some other actors I’ve heard by far!

Very nice, a great twist at the start, and even better at the end!!

Cannot wait to see the next book!!
I THINK we’ll get to see a DOUBLE emergence of ‘someone’ coming back from beyond ;), that would be epic! ;)

I loved this book, I can’t believe it’s already over! Reaper Cain is still great, as are all the others. I’m ready for the next book.