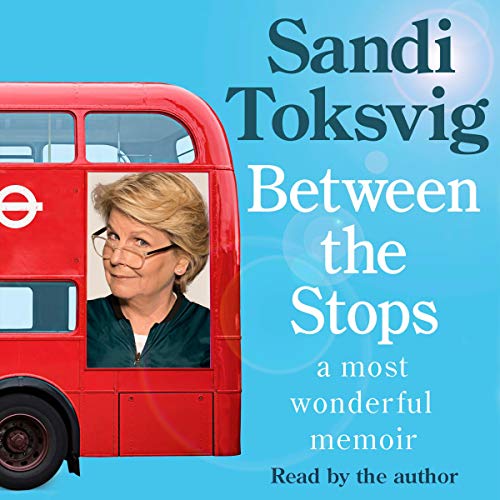 This long-awaited memoir from one of Britain's best-loved celebrities - a writer, broadcaster, activist, comic on stage, screen and radio for nearly 40 years, presenter of QI and Great British Bake Off star - is an autobiography with a difference: as only Sandi Toksvig can tell it.

'Between the Stops is a sort of a memoir, my sort. It's about a bus trip really, because it's my view from the Number 12 bus (mostly top deck, the seat at the front on the right), a double-decker that plies its way from Dulwich, in South East London, where I was living, to where I sometimes work - at the BBC, in the heart of the capital. It's not a sensible way to write a memoir at all, probably, but it's the way things pop into your head as you travel, so it's my way'.

From London facts including where to find the blue plaque for Una Marson, 'The first black woman programme maker at the BBC', to discovering the best Spanish coffee under Southwark's railway arches; from a brief history of lady gangsters at Elephant and Castle to memories of climbing Mount Sinai and, at the request of a fellow traveller, reading aloud the Ten Commandments; from the story behind Pissarro's painting of Dulwich Station to performing in Footlights with Emma Thompson; from painful memoires of being sent to Coventry while at a British boarding school to thinking about how Wombells Travelling Circus of 1864 haunts Peckham Rye; from anecdotes about meeting Prince Charles, Monica Lewinsky and Grayson Perry to Bake-Off antics; from stories of a real and lasting friendship with John McCarthy to the importance of family and the daunting navigation of the Zambezi River in her father's canoe, this Sandi Toksvig-style memoir is, as one would expect and hope, packed full of surprises.

A funny and moving trip through memories, musings and the many delights on the Number 12 route, Between the Stops is also an inspiration to us all to get off our phones, look up and to talk to each other because, as Sandi says, 'Some of the greatest trips lie on our own doorstep'.

What listeners say about Between the Stops

Rarely has a book reduced me to tears of laughter, joy and sorrow.
Very easy listening, and one I will return to several times.

I have always been a great fan of Sandi and love the kind person she is and the way she tells stories with intelligence and wit. I really enjoyed her book ‘Peas and Queues’ and I was looking forward to this book but ended up not finishing it. At the start she told stories of how women over millennia were over looked, ignored, abused and pretty much written out of history, I found myself nodding in agreement with many well-made points, for let me be clear I agree with all the points made in this book. I’m so glad things are changing albeit at a slow pace, but as the book went on there is hardly a street, painting, church in fact any subject that Sandi can discuss without reference to some bad man or men in general who are at worst despicable and at best compliant in the mistreatment of women. Its just too must and I felt alienated, I couldn’t finish it and I ended up feeling sorry for Sandi that this is the way she sees the world. Not for me.

Gives Bill Bryson a run for his money in the "entertaining anecdotes which repeatedly take hard turns into grumbling" stakes. if you're straight, white or male (or, god forbid, all three) then expect to be berated about once every four minutes.

I really loved this book. It was written in a very clever and interesting way. I felt I learned about Sandy but so also learned about London in equal measures. It has a feminist thread running through it, but only in as much to make you question the way things are. A brilliantly light hearted read. I now want to make Sandy my new best friend.

Not as funny as I hoped.

informative, if not a little bit whiney in places. More a history of London.

I liked the set up of bus ride but felt there was a better way to express on what had to be a fascinating life so far. Overall felt it rather depressing tone repeatedly. Her ppints are important and valid and I am not wanting to downplay the femenist issue but it was constant. interesting but not a cheerful read unfortunately.

Sandi Toksvig narrates her amazing book. It's Funny, Moving, Touching and Totally inspirational. Her journey on the number 12 bus and in her life has open my eyes to history and to at times the cruelty of others towards Sandi and anyone who is differnt from the expected Norm.
Sandi s passion shines from the page. Her humour as it pops from the page or through her narration will have you hooting with laughter. A book that is definitely a keeper and one I would read again!!!
I would Love to Read/Hear another book from Sandi Toksvig xx

Not the usual style of autobiography, but this is Sandi Toksvig, after all.

I loved it. A delightful combination of historical trivia with her own life story, told openly and honestly. I wanted to give her a friendly hug at the end.

I am a fan of Sandi Toksvig

Mainly I enjoyed this book and I do love Sandi Toksvig, however although I totally understand her point of view I just feel that she is a little overzealous to the extent that she is down on men because they are men. This is the exact mirror image of her complaints that women are put down because they are women. The stories were delightful and beautifully told and Sandi has a lovely nature and is so ‘sensible’. I enjoyed listening to her musings.

Funny, interesting and enlightening. A must listen.

Loved listening to Sandi’s thoughts, memories and experiences, particularly as they relate to London. I learned a lot about this amazing city as well as about Sandi, one of my favorite entertainers.

Can only speak for myself

I don't often have love-hate relationships with books, but this one, yes.

I had no idea who the author was when I dropped a credit on the audiobook; summary sounded good, and I liked the sample. Afterwards, I've decided that the premise was sound, with top-notch writing, but the execution of the material failed me. To put it bluntly, ripping off the Band Aid (Elastoplast): memoir, history and current events were poorly integrated, with the heavy-handed feminism tiring rather than effective.

Can't recommended it, not sorry I bought it. Already a fan, grab it! If not, Your Mileage May Vary!

The only thing I disliked about this book is that it had to end. The snippets of history, interspersed with interesting stories of Ms. Toksvig's life was excellent. I loved that it wasn't a memoir of just about the high points of her life and career but it had her unique perspective on many different points. She certainly has had many interesting experiences and listening to her read the book was just as if she where telling anecdotes at a great party.

I became acquainted with Sandi Toksvig from the Great British Baking Show. I thought she was an interesting woman, and wanted to find out more about her. I knew she was a lesbian and was married to her partner, from Wikipedia but I wanted to know more. I searched on Audible and found this gem. She narrates this from her view on riding her city bus from home to work. She talks about the history of the little towns and villages she passes, and is always wondering why more women are not mentioned in the UK history. She is a great narrator, and she is easy to listen to. I will be recommending this book to anyone who is a fan of the Great British Baking Show or who loves history.

I'll keep it simple, listen to this book. It's well worth a credit. Do it.

Sandy Delivers From the beginning, I felt wrapped

From the beginning I felt wrapped up in Sandy's voice. I'm familiar with some of her television work, which is outstanding. Her story is fascinating, and she's a role model for all women.

A tremendous read / listen .... I laughed out loud and shed a tear, what more can you ask for?

Sandi quite literally made London bearable in the time I lived there, doing my OE. I watched her in various tv shows I can't remember the names of. Nobody I worked with watched the channel let alone the shows! BBC4 maybe. She was amazing and different from others - now I know we were sisters. She surely was very good as a friend, albeit on tv, to a young woman in her way out to the world. Now I am back in my birth country, New Zealand, as a kiwifruit.
Between the Stops is fascinating and tells me about many of the areas of London I passed by. Even if you have never been to London I truly believe Sandi will entertain you.

Love the way she tells stories

Sandi is an amazing writer and narrator. This does not disappoint. It’s funny and very interesting with of course facts about history with bits and pieces of her. Highly recommended!