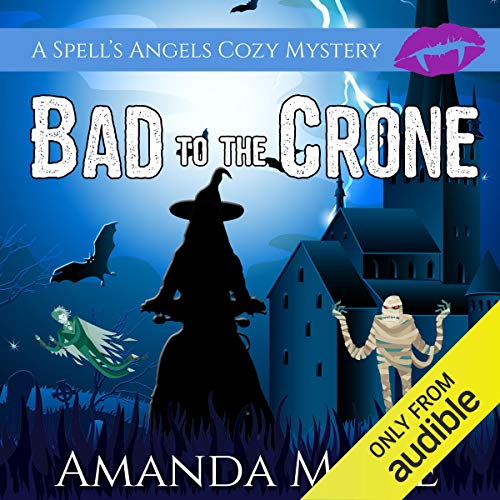 Bad to the Crone

Scout Randall is more than a witch on a motorcycle. She’s more than the magic she wields. She’s also a woman with a secret past that she can’t remember...a sarcastic wonder who acts before she thinks.

The one thing Scout knows with absolute certainty is that she’s got a purpose in life...and that purpose is fighting evil. That’s why she joined the Spell’s Angels, a biker group with offices all across the world. It’s because of the group that she finds herself in northern Lower Michigan, in a place called Hawthorne Hollow, where magic is out in the open and Scout finds her powers are constantly on display.

She was transferred to the town because they needed help, although no one will tell her what happened to the woman who held the position before her, and she’s constantly distracted by the local denizens, including Gunner Stratton, a shifter with a history he would rather keep to himself.

Scout is determined to do her job...even if it means taking on the congregation of a local church with murky origins. It seems the dead are rising in Hawthorne Hollow, and it’s up to Scout to figure out why.

She’s going to have to learn to trust her new coworkers - and a few random outsiders in the colorful town - on the fly because they’re all going to have to come together to take down an enemy that is strong enough to wipe Hawthorne Hollow off the map.

Get ready for adventure because it’s going to be nonstop from here on out.

What listeners say about Bad to the Crone

Great start to a new series. New characters, good storyline and enough magic and mystery to keep me happy

Great book, you shall find this great listening material. Enjoy yourself the characters are brilliant.

Bad to the Crone is a fantastically entertaining and completely enthralling mystery. I loved losing myself to Lee’s awe-inspiring world of the paranormal with a hint of danger, friendship, and heart. It was such a wonderful breath of fresh air. The originally of the plot and all of the depth and intrigue left me completely delighted and entertained. What a joy to discover incredible characters that never failed to surprise and always held my full attention. I couldn’t have asked for anything more in order to add to this fabulous mystery! It was perfect, and I highly recommend it!

Meghan Kelly never fails to deliver high quality narration, and this one exceeded my expectations! I was left breathless listening to her build the depth and personality to each unique character. Her stunning contribution to this story has brought forth a world that has enriched my literacy appreciation and allowed me the opportunity to experience and savor the work of authors whom I would not normally read. Nothing she creates ever falls flat. Instead, I find my admiration for her work continuing to grow with each foray into her impressive collection. I can’t wait to see what she creates next!

Listening to this book was like listening teens argue. The immature sarcastic overexplaining is exhausting. Just when t
you think it was getting better, another bout of "I know you are but what am I" childish rants happens.

I love this new addition to the Amanda M. Lee universe. It has some great characters that I can't wait to see develop. I am also anxious to see how this series expands the mythos of the universe. I have my guesses about how Scout fits in and how this series might inform readers about how magic came to be and why it is so diverse and cannot wait to if my guesses are correct.

A must listen selection !

Loved the character and storyline developments; which can spin off in so many interesting avenues, with so many loveable characters. This book grabs the listener and pulls them right in. I am so looking forward to the next release and cannot wait to see which pathway the author takes us down next time!

A great new set of characters from Amanda Lee. I loved the story and magic and confidence heroine. Hope the next in series is soon to come

I had high hopes for this book but unfortunately they weren't met. The storyline and characters have so much potential. The story has the main character starting off strong and confident only to have her become whiny and inexperienced. Also, the crew was almost nonexistent in their roles. The narration was Meghan Kelly's usual...awesome! She gives the characters their own emotions and voices. She brings the story to life and helps the listener get through it to the end. I will most likely listen to the next book in hopes that the author does better.

Not her best but not her worst..

The romance could have used a little more conflict before the resolution but you have to start somewhere. Over all, I like the new setting and premise. I think this is a decent start to a new series.

It is, again, set in southern lower Michigan which has the potential for crossovers with any and all of her other series. The Amanda Lee universe is growing and I'm happy with the idea. I understand some of the older series are being phased out so this is a good thing.

Bad to the Crone

Loved this new series. Scout is kind of a bad arse. chang wait to see where things go with Gunner and to see what misadventures follow in Hawthorne Hallow.

The story is not interesting and the narrator is the worst ever. She sounded like a child that was just learning read out loud.