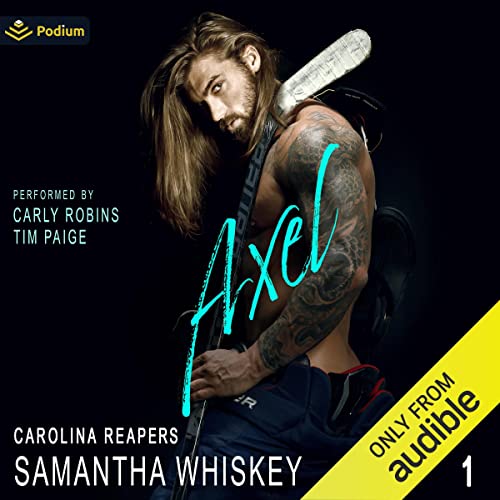 By: Samantha Whiskey
Narrated by: Tim Paige,Carly Robins
Try for £0.00

The NHL’s been at my door since I was 18, but I’d never leave the Swedish Hockey League—not while raising my little brother. But now he’s grown, and the Carolina Reapers show up with my greatest weakness: Langley Pierce, their new head of PR.

I’ve never been able to say no to her. She’s fierce, independent, and the sexiest woman I’ve ever met. She also has a stubborn streak wider than my entire country.

One comment from her smart mouth about never dating again, and I propose. No, really, I actually propose:

A six-month marriage contract in exchange for signing with the Reapers. I want to date this woman so badly that I’m going to marry her first.

I’ll use each day to show her how a queen should be treated. Our wedding day started a countdown I’m powerless to stop, and the faster the months fly, the harder I fall. She’s sworn she’ll never choose a man over her career, and I promised never to ask her to.

Until I’m forced to. How can we move forward when we started this whole thing backwards?

If I can’t convince her this marriage is anything but fake—the next document we sign will crush us both.

Welcome to the Carolina Reapers, Samantha Whiskey’s newest hockey series where the chill of the ice meets sultry southern nights.

What listeners say about Axel

Loved Axel’s accent and this had some great tropes

I am absolutely obsessed with how Tim Paige voiced Axel in this audiobook. The slight Swedish accent was perfection! Carly Robins did a great job as Langley as well, both characters were brought to life and really kept me engaged with the story.

Axel Nyström has never had the option to choose love or an NHL hockey career, he’s raised his younger brother in their home country of Sweden ever since their parents were killed when he was 16 and his brother was only 8. But his brother is 18 now and is going to play hockey for a Swedish team, starting his own life. So when a woman that he hasn’t been able to get off his mind comes to recruit him to play for the Carolina Reapers NHL team, he decides what it is he really wants. Yes, it would be amazing to finally achieve his dream of playing in the NHL, especially since his best friend plays for the team, but it also means leaving his only family behind. The one thing he really wants though, is her. He agrees to the contract on one condition, 6 months of marriage to Langley Pierce so he can date her and somehow get her to fall in love with him.

Langley Pierce is determined and career focused as the head of PR for the Reapers. When she’s sent to Sweden to sign Axel to the team, she knows he has a weak spot for her, but she did not expect him to propose a marriage. But as she considers it she realizes she enjoys his company and the sex would be hot. He’s career focused too and six months isn’t that long, it’s not like with that timeline she’ll give him her heart. The one thing she absolutely will not stand for is someone who expects her to choose between him and her career, but since this wasn’t love that wouldn’t be a problem, right?

“Sex is easy, min enda kärlek. Chemistry isn’t something you can construct. You have it, or you don’t. That’s never been an issue for us. My body reacts the minute you walk into the room or even my thoughts. The minute I get my hands anywhere near your skin, you’re wet and ready. But trust? That’s something you build. I needed you to trust me, and I needed to trust you before anything like this could happen. I wasn’t willing to trade that trust for an orgasm, and now I think it’s strong enough that we can have both.” - Axel

“And then you proposed to me so you could date me. And every single day with you was better than the last. Better than any days prior to you coming into my life, happy as I was. And I found myself falling so incredibly hard for you, that I panicked. I was terrified of losing that control in my life. Losing that part of me that had kept me alive and thriving all these years. Panicked that if I gave you my heart you’d have the power to crush it.” - Langley

I love the rest of this series, but this book never made sense to me. The way this fake marriage was devised made absolutely zero sense and felt so forced so it’s already off to a weird start. And then during the drama at the end, Langely’s actions again make no sense, and feel forced to create drama for drama’s sake.

Spoiler ahead so don’t read if you don’t want it spoiled:

So Axel heads back to Sweden to take care of his brother who has been hurt and I understand why she couldn’t join him at first, but she didn’t even try to call or check in with Axel to see if his brother was okay. Who in love wouldn’t at least try to show their concern?

So much of this book just seemed like SW just needed a way to kick off this series and this was the only way she could think of. It’s kind of a throw away book, but yet is an introduction for the rest, so I’d recommend reading it on KU, and saving the credit.