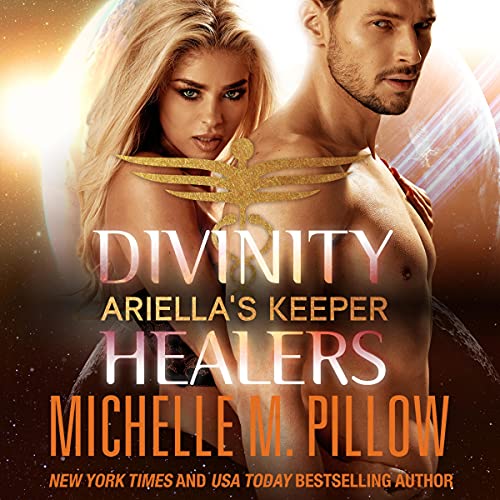 By: Michelle M. Pillow
Narrated by: Rebecca Cook
Try for £0.00

When his father threatens to take away his research facility’s funding if he doesn’t come home, Dr. Sebastjan Walter has no choice but to do so. This isn’t just a family reunion. It seems his father has arranged a marriage - Sebastjan’s. Seeing his chance to make one last final deal to get his father out of his life, he agrees to marry the off-plane woman. After seeing her, he can’t help but think he’s made the better bargain.

Ariella has been held prisoner by the Medical Supreme since he cured her of a childhood illness. Forced to stay in his home as his ward, she has no choice but to do whatever he wants. When he demands she marry his son, Ariella finds this is one order she might not mind obeying.

What listeners say about Ariella's Keeper

Right from the first word I was hooked,

This book was everything I wanted. HEA, romance and a great female lead. I didn't read any reviews for this one before going in and I was not disappointed.

Ariella has been held prisoner by the medical supreme Walter using an artificially created disease to ensure her compliance. She is being held on a world where health is a premium, but she is also bait to control Walter's son, Sebastian.
A good story with interesting well formed characters that was easy to listen to.

As with all this authors books, I thoroughly enjoyed this. Sci-fi with some plenty of steam and some really sweet parts where the newlyweds get to know and trust each other. A short, enjoyable novella which didn’t include a lot of detail, hence the 4 stars. I would love though to read more about this world. As always, Rebecca Cook, the narrator, did an excellent job keeping me entertained.

Ariella is being held prisoner by Medical Supreme Walter. Supreme Walter injected Ariella with a deadly disease. If Ariella doesn't do what Supreme Walter he threatens to take her cure away from her. Supreme Walter is making his son, Sebastian Walter, marry Ariella. The two main characters are likeable, I really liked Ariella, she seems so sweet and of course innocent. Supreme Walter makes you wanna slap him silly. There's a few steamy parts but the getting to know you part is sweet. I'll be continuing on with this series, I'm sure it'll be good, all of the books by this author is. I recommend this book.

Narrator did a fantastic job with book, have always liked the divinity series, looking forward ro getting the rest of the books in the both the divinity series. Even though these stories are more than 10 years old, it is nice to see that they are still a great read or listen. Highly recommend the divinity books and this narrator!

Michelle M. Pillow uses her classic writing style to bring us the start of another series that is shaping up to be fantastic. The characters were well written and the story line kept me engaged. The narrator did a first rate job of bringing this book to life. The combination made this a delight to read and/or listen to,

I received a copy of the Audiobook and I am voluntarily leaving my honest opinion.

Ariella's Keeper by Michelle M. Pillow is the 1st book in the Divinity Healers series.
Set in a futuristic alternate universe, Ariella and Sebastian just want to be free from Sebastion's controlling father.
Quick read, but sweet and steamy. I really enjoyed this audio!!

This is the first book in the Divinity Healers Series, an alternate reality romance, part of the Divinity Universe. I like the cover. Ariella and Sebastjan’s story is original, steamy, intricate, and fast-paced. Ariella is a beautiful character, strong, and smart. Sebastjan is alpha, dominant, and protective. The world building is interesting, and intriguing. Rebecca Cook did an excellent and entertaining reading of the story. She has a beautiful voice, with a great range of voices. Looking forward to listening to the next book in the series.

This is book 1 in the new series, Divinity Healers and is a stand alone book with a wonderful HEA. I recommend this new book to all paranormal readers. The narrator does a good job of bring each character to life. I am looking forward to the next book in the series. I had to listen to it in 1 setting, did not want to stop, had to know how it ended… :). Happy listening.

This audiobook is smokin. It also has tragedy & a truly devious act. It really was a sad BUT great story with a wonderful HEA.
This is Ariella & Sebastian's story with his despicable dad, Walter, being a key component.

***SPOILERS***
I'm gonna keep this short because you need to listen for yourself.

Ariella is a young woman who looses not only her family but ultimately her home planet and then her freedom.

Walter, the most despicable villain, kept Ariella prisoner but in a more devious way. An illness that he created. He happily gets what's coming to him in the end.

Sebastian, Walter's son, dislikes his dad as much as Ariella but unbeknownst to him, when he is ordered home, it's for his own arranged marriage to Ariella. They actually started to care for one another & when Sebastian learned of what his father had done......let's just say he was mad.

Now, if you want to know more......BUY NOW WITH ONE CLICK. I HIGHLY RECOMMEND YOU DO!

Welcome to a alternative world, filled with state of the art computerized, medical devices and portals to different worlds. This was a quick and interesting read. Ariella and Sebastjan must abide by a lunatic in order to gain their freedom and live their own lives.
This was a steamy sci-fi romance. While it was a bit of sci-fi it wasn’t over the top and very easy to follow. The narrator did a great performance and kept me enthralled.

I was delighted to find this story mingled with a previous Divinity series that l had really enjoyed. It was easy to empathize with Ariella, what an impossible situation she was in. Looking forward to see what is in store in book 2. Nicely narrated.

What a fun alternate universe story with a forced marriage and some crazy twist to keep you guessing. Michelle always has such vivid world and different world in her books. This one is no exception and I just wanted to hug Ariella. Short and fun and I absolutely loved the narrator. I was just obsessed from her first minute!