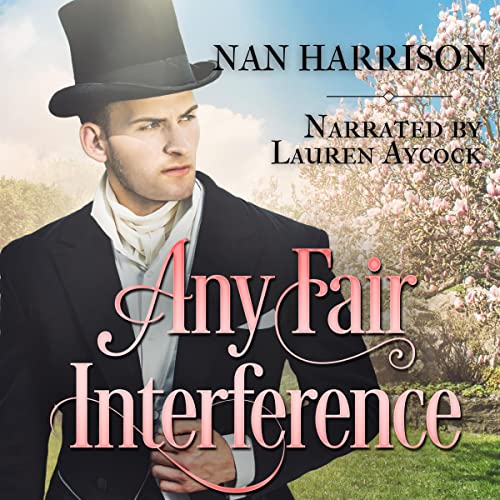 By: Nan Harrison
Narrated by: Lauren Aycock
Try for £0.00

To be a fool is one thing, to be a fool for love is something else altogether.

Shortly after the precipitous departure of Mr Bingley and his party from Netherfield Park, disaster strikes Miss Elizabeth Bennet’s family. Not only is Mr Bennet ill, Longbourn and indeed all of Meryton is struggling through one of England’s worst winters. Elizabeth draws on every strength to care for her family, but faces the alarming prospect of losing both her father and her home. Her lonely struggles lead her to revise her opinion of a certain gentleman, and she finds unexpected solace in dreams of Mr Darcy.

Fitzwilliam Darcy believes he can escape his attraction to Elizabeth by leaving Netherfield. He soon finds himself snowbound at Pemberley, where forced isolation compels him to contemplate his duty, and contrast it with dreams of his heart’s desire. No matter how he considers it, though, he feels he cannot have Elizabeth, the one he truly loves.

Fortunately Darcy's friends and his family–Georgiana, Colonel Fitzwilliam, and the Hursts–feel far differently than he, and soon even the most unlikely allies have come together to help him see that happiness is the highest consideration of all. But will he and Elizabeth find the courage to follow their hearts before it is too late?

Any Fair Interference is a Pride and Prejudice variation.

What listeners say about Any Fair Interference

Complete and fully realized story, such a dream!

Oh I was sad to see this one come to an end! Where do I begin? The plot was so fun and fleshed out with lots of supporting characters that were given more time and fully realized personalities than in the original. Some of these characterizations are strikingly different from P&P but the author does a nice job of working that into the plot.

I thought the pacing of this was very good and my only complaint might be that ODC spends a large portion of the story apart. The author more than makes up for this later!

One of my favorite aspects of this story is that nothing is skimmed over. I hate when you're reading a story and there's a line like "they walked together and had the most delightful conversation and fell more and more in love" without any insight into what actually transpired between the characters. This story does not skip any of the important conversations that form the foundation for the characters actions and feelings.

The peripheral characters take more of a central role here and are all fun and unique in their characterization. It was such a joy to discover the larger world of Pride and Prejudice.

I will note that the narrator makes some odd choices with pronunciation choices, most notably pronouncing Longbourn as LongBURN. But over all her delivery is transporting. Occasionally I had a hard time deciphering that she had switched from voicing one character to another but this confusion never lasted long and did not diminish my enjoyment.

This went to the top of the list of my favorite Pride and Prejudice variations and I am sure I will return to it again and again in the future.

Great story. I read it first and listened to it after. Both good ways to enjoy a book. This was a well written with a Darcy that pursues Elizabeth for a long time. Determined. Great Jaff.

Oh my! I was tempted REPEATEDLY to request a refund for this story, and as I have yet to finish it, I may still.

Because I like the different twists in this story so far, I am TRYING to stick with it.

**Slight Spoiler** So you can decide if you want to give it a try (credit only…don’t SPEND $). There are some great changes for the younger Bennet girls as Kitty is influenced by Mrs. Hurst of all people. In fact, we get a glimpse into the Hurst marriage and Mr. Hurst is much more attentive to the benefit of all. Nice twist overall. Caroline, of course, is Caroline…..

The Performance….this is where I’m annoyed in nearly every chapter. She pronounces some words so badly, I can barely understand what she is supposed to be saying. Also, she may not have ever heard anyone else read one of theses stories. Why is the Bennet home LongBURN? If this sort of thing doesn’t annoy you, enjoy the story.

Very well written. All was happy all around except Caroline should have been made to get her own place...lol.
The narrator I didn't car for but was ok. I wished more of the variation could be read by Arthur Rowan

For a first published work I’m encouraged that we have a new JAFF author to admire not and hopefully the future. I loved the story of the Hursts and their friendship with the Gardiners. This was definitely a P&P story but more of it was focused on the characters of Louisa and Gilbert Hurst, Jane and Charles, and the female Bennets dealing with Mr Bennet’s illness and death. Elizabeth’s and Darcy’s story took place mostly in their heads until far into the book. However, at least with this fact the author took a respectable and satisfying time with the couple meeting and getting to know one another better before the proposal.

The narrator mispronounced several words but in general I enjoyed it from that perspective.

I recommend this to JAFF fans especially.

I was distracted by strange pronunciations of words, such as “chaff-ing” for chafing, “Longburn” for Longbourn (although this at least seems plausible), and, most notably, “Gross-Ven-eer” for Grosvenor. Often it took me a moment to figure out what was meant, although by the end I wanted to scream “the S is silent!” at the narrator. It just made me think that perhaps the narrator has a limited vocabulary or limited exposure to vocabulary. Overall I preferred the kindle book to the audiobook.
I do, at least, appreciate that this was an audiobook option as I know production costs for audiobooks can be exorbitant. Especially if the narrator pronounces words in familiar ways, I guess.