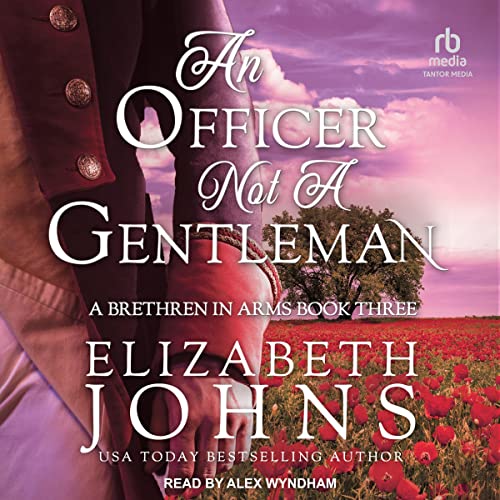 An Officer, Not a Gentleman

By: Elizabeth Johns
Narrated by: Alex Wyndham
Try for £0.00

Despite Tobin O'Neill's humble origins, he finds himself a lieutenant in His Majesty's army, serving on Wellington's staff. When the roguish Irishman strikes up an unlikely friendship with a general's daughter, they somehow become enmeshed in navigating the perils of the greatest battle of their age.

Bridget Murphy had grown up following the drum. Left motherless when a child, she knows no other life and has found purpose in nursing the wounded. The conflict at Waterloo having no regard for rank or fortune in the course of its destruction, they find themselves leaning on each other as they slowly recover from the aftermath.

When they return to Ireland, Bridget's family betrays her, while Tobin's unexpectedly wants to be a part of his life. In a stroke of irony their situations then become reversed, and Tobin now has to convince Bridget that they were meant for each other.

What listeners say about An Officer, Not a Gentleman

Best of the series, so far.

This book is cookie cutter version of the first book in the series. Same plot, different characters. BUT in both books the main characters are aggravating in the extreme. Wishy washy for most of the book. Will they marry? Will they not? For goodness sake. In spite of Alex Wyndham, this book goes into my "not again" group.