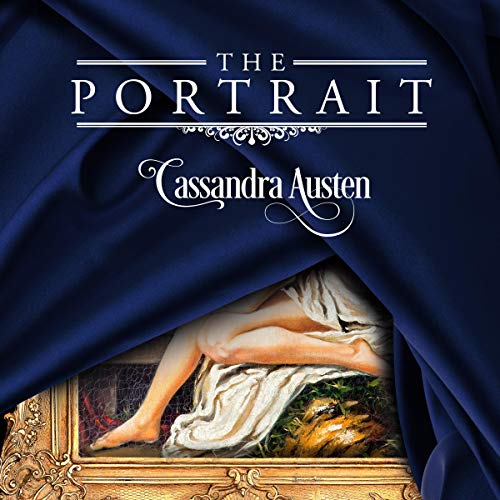 By: Cassandra Austen
Narrated by: Alex Wyndham
Try for £0.00

Lady Catherine Claverton lives alone and angry on the outskirts of Bath, banished by her father because she was born lame and a girl. When the old earl dies, leaving the ancient title to revert to the Crown, Catherine learns the secret that her late mother kept from her - that she is the heir to a title in her own right. If she marries and bears a son, she will have what her father could never have: a legacy through the female line.

But if she takes on that challenge, she needs to marry, something she never dreamed possible. And the two candidates are men with secrets. The kind but secretive sea captain. The handsome but dangerous smuggler. And Catherine has a potentially explosive secret of her own.

What listeners say about The Portrait

Super weak story or no story at all, I can not quite decide, but basically there would not be any story if the protagonists would talk with each other at all. The sheer stupidity of the heroine is hard to understand. Alex Wyndham is a great narrator, but this is not a book worth listening to.

Outstanding narration, shame about the book

I chose this book purely because Alex Wyndham was reading it. Of all the male readers in my vast audio collection, he is one of the best. However not even his talents could save this book. When I first started listening to it, I was hopeful that I had found a new historical author (my favourites other than Jane Austen of course, are Lucinda Brant and Stella Riley, they are outstanding & so well-researched that it is a pleasure to read). However about a quarter of the way into this book, I began huffing & puffing at the storyline - it just didn't go anywhere. I understand that Georgian/Regency romantic novels usually have The Big Misunderstanding, but really, this one was the outside of enough! The last half of the book was based entirely on what he didn't tell her, and what she didn't tell him. I wanted to knock their heads together, the stupid pair. I just couldn't root for either hero or heroine, both deserved each other. The lady of the book was ridiculous in that she wanted an heir but then whilst pregnant, embarked on a journey of such profound stupidity, that I almost stopped listening. There was also a situation involving the painting discovery when one of the main characters learnt of it's whereabouts through a prostitute - that really stretched my powers of imagination. I only continued to listen in honour of Alex Wyndham's hard work.

beautifully written and performed, loved the characters in this. I hope this is part of a series - great stuff

I didn't warm to the female lead first of all but eventually understood why she was, she was protecting herself, her childhood was awful. Born with a lame leg , she was shunned by her father and worse of all a girl.!
She meets a man and falls in love, but she cannot tell him as it will open her up to more heartache. if he doesn't reciprocate.
She asks him to marry her and he agrees.
Most of this story is about secrets not shared by both parties which leads to misunderstandings, and in a marriage you need to share everything.
I loved this book and Alex Wynham is a brilliant narrator..
Not everyone will like this story but I did and will listen to this again.

very enjoyable although a bit long winded in places. different story line with twists and
open ended making you want to read the next book. yeah! liked it.

Cassandra Austen is a new author for me and I found her story intriguing. Alex Wyndham is so so talented and my favorite narrator. Together they made the story and the characters a competing listen. As in any book, the characters make the difference and this book is certainly no different. HOWEVER, I almost stopped listening because of Catherine, the heroine. She was stupid, selfish, thoughtless and extremely aggravating. Alex Wyndham save this book....seriously.

Alex Wyndham is a brilliant narrator

Thank goodness Alex Wyndham had an excellent book to bring to life. The main characters did suffer from that annoying flaw of many Romance heroes and heroines, distrust and an unwillingness to confide their secrets in one another. Of course, if they had, the book would have been much shorter and with far fewer plot twists.
Cassandra Austen kept my attention and kept me up late two nights in a row. Katherine was a distinctive and strong willed character without the anachronistic qualities of many recent historical romances. Jossilyn (sorry but I haven’t seen his name written) was an intensely honorable man, saved from seeming a prig by his self doubt and jealousy.
The happy ending set us up for an intriguing continuation of the story with a new heroine. I hope it is available in audio soon.

I love that this book respects the listener's intelligence with enough history and authenticity, while still being mysterious and dramatic enough to be the audio version of a page-turner. The conflict felt real and I was deeply invested in the characters. Just the right balance between romance and intrigue. I loved the cliff hanger and can't wait until the next book!

I enjoyed this book. I'm anxious to read the next book in the series. Not your typical story. Narration was very good.

Love story in an historical setting.

Who is this author? I have never heard of her before and can't seem to find any information on her. I really enjoyed this book. The style of writing seemed familiar, but of course, with Alex Wyndham as narrator, that could be why.
The book starts out with a hook and I found myself really fascinated and interested in the story. Born an unwanted and disabled female in a world ruled by men who prize most of all, a male heir. It is a fresh, unique story. It has a little bit of humor in the beginning, but as the book progresses, it becomes a little melodramatic and less humorous. The love story is quite sweet with many obstacles - some that are surprising to the reader. I appreciate the main character's flaws of being dismissive to those beneath her and quite commanding. She is a Countess who has learned to take charge of her own life and had not been raised around other children - only servants. I think it would be unrealistic to expect such a character to be sweet and demure. I enjoyed the setting in Wales at her ruin of a castle and getting a small glimpse into the Welch culture. The epilogue ends with a hint of a sequel. Overall, it was an entertaining listen and I am curious to see more from this author.

The story had such potential. The main character Catherine, started out as a strong and interesting character. but as the chapters unfolded, she just turned into a whining, simpering, complainer. I only stayed through to the end because I always love Alex's performance so much.

I wanted to love this

I really did want to love this. I could listen to Alex Wyndham read anything and be happy, and period romances are my current fave listen. But... hearing the male lead wish to kill his wife and her hypothetical lover upon realising she wasn't a virgin, and not feel any remorse for having that thought? No. That just isn't cool. Books set in these times will certainly have plenty of misogyny, but there has to be a limit on what is reasonable. And that just ruined his entire character.
To be fair, I did not finish this book. Perhaps he redeemed himself later on, especially since, spoiler alert, their issues were all about lack of communication and not a whole lot more was even going on. So I assume they eventually communicated and it all ended up fine in the end.

As always, Alex Wyndham can do no wrong, his performance was perfect, he maintains different accents and character voices so well that at times I forget that there's only one narrator.

While this story is an intriguing one, it is a mistake to have a male narrating the part of a delicate, shy female. The narration is very good overall, but the author should have chosen a female for the part of Catherine. Her “voice” as well as the other female voices are much too harsh and gravelly to be believable.