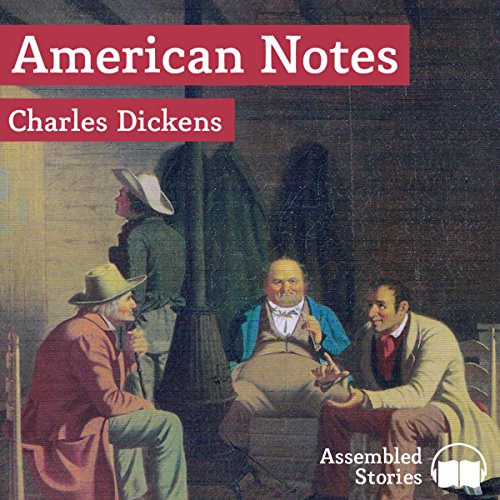 By: Charles Dickens
Narrated by: Peter Joyce
Try for £0.00

In 1842, Charles Dickens visited America. His reception was somewhat colder than that which usually greeted him - already a successful author in both Britain and the United States. This lack of enthusiasm from the Americans was partly due to his criticism of the pirating of English books in that country and partly due to his outspoken distaste for the custom of slavery in the Southern states.

He wrote in the preface to American Notes, 'Prejudiced I am not, and never have been, otherwise than in favour of the United States. I have many friends in America. I feel a grateful interest in the country. I hope and believe it will successfully work out a problem of the highest importance in the whole human race. To represent me as viewing America with ill nature, coldness or animosity is merely to do a very foolish thing, which is always a very easy one!' Despite this placatory tone, one American reviewer spoke thus of American Notes: 'The most trashy...the most contemptible...the essence of balderdash, reduced to the last drop of silliness and inanity'.

Listen to the journals and judge for yourself.

"Peter Joyce is the most remarkable one-man band in audiobook publishing. Joyce, an experienced actor, reads them all himself." ( The Independent)

What listeners say about American Notes

Far far better than anything by Vincent Crummles

I have waited ages for an audio version of American Notes, always having taken a copy with me on trips to America and never having read it. Peter Joyce's version does not disappoint, it's a sheer and utter joy. Americans may feel uncomfortable about the mirror that Dickens held up to their 'new country', but he went there with the best intentions, hoping that the republic would thrive and throw off all the class struggles of the old country/continent. He hated the chewing of tobacco and the continual spitting, something you rarely see in its genuine form in historic films. Every member of congress had their own desk and their own spittoon.
It's interesting to read between the lines the restraint in his writing, plus the detail of his travel arrangements - the sleeping and eating and the minutiae of day-to-day routine.

What other book might you compare American Notes to, and why?

Peter Joyce is certainly a match for the great Dickens one-man-show actors such as Simon Callow.