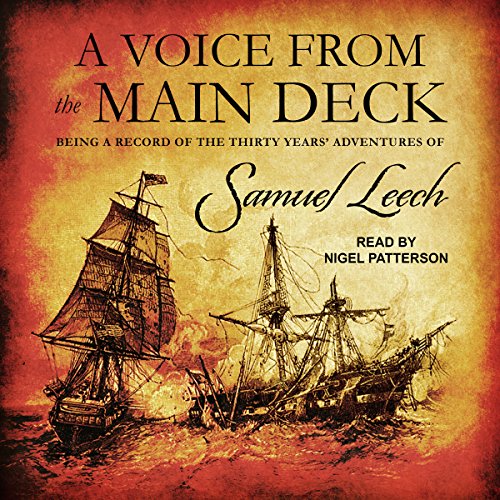 A Voice from the Main Deck

By: Samuel Leech
Narrated by: Nigel Patterson
Try for £0.00

"I heard the shot strike the sides of our ship; the whole scene grew indescribably confused and horrible; it was like some awfully tremendous thunder-storm, whose deafening roar is attended by incessant streaks of lightning, carrying death in every flash and strewing the ground with the victims of its wrath: only, in our case, the scene was rendered more horrible than that, by the presence of torrents of blood which dyed our decks."

This was Samuel Leech's first experience of naval warfare. He was a powder monkey aboard the HMS Macedonian when it was attacked forced to strike its colors by the USS United States in the war of 1812.

Leech provides a fascinating account of life as a sailor in the War of 1812 and through early 19th century. It is a remarkable account of a man who, until the conflict with the USS United States, had fought British Navy but after that battle changed allegiance to the United States and continued sailing with her navy for a further four years. He provides brilliant insight into the contrasts that he saw between the US Navy and the British Navy during this time.

It is a vivid account of life at sea in the early 19th century and a perfect addition to any sailor's library.

What listeners say about A Voice from the Main Deck

Samuel Leech spent only a few years as a sailor and the rest living on land. The interesting portion is his short time serving on the Macedonian. Much of this part of the narrative has been quoted often in other histories of the War of 1812.

Leech spends pages of his book discussing religion and the perils of drink. Don't expect thirty years worth of sea stories.

While for some it will be boring I Love personal history
This jolly rolling tare had a very active life.
For me a great read.

First hand accounts fascinate me. This is a detailed first hand account of a sailor...it includes many details often overlooked and reads so pleasantly that it feels as though you sitting down to coffee with the author. I highly recommend this reading.