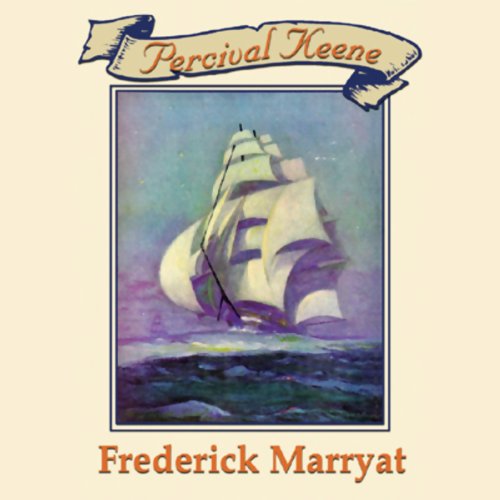 By: Frederick Marryat
Narrated by: William Sutherland
Try for £0.00

Captain Frederick Marryat of the Royal Navy well knew both the thunder of the broadside and the laughter of the gun room. Here he brings us a gripping tale "over which", said Charles Dickens on its first publication, "I have been chuckling, and grinning, and clenching my fists, and becoming warlike."

The adventures of the mischievous young midshipman Percival Keene begin when he learns that the demanding Captain Delmar, a member of the wealthy and titled De Versely family, is actually his natural father. Stung by his father's refusal to acknowledge him, Keene sets about to win his father's love and acceptance and gain the family fortune. To do so, he survives shipwreck and capture by murderous pirates, fights duels of honor with his fellow officers, and battles against the French. Percival Keene is a thrilling ride through the exciting naval world of the Napoleonic wars.

"[Marryat] set[s] us in the midst of ships and men and sea and sky all vivid, credible, authentic." (Virginia Woolf)
"[Marryat's] adventures are enthralling; the rapidity of his action fascinates....His greatness is undeniable." (Joseph Conrad)

What listeners say about Percival Keene

This is a real treat

Even since I finished listening to "21 - The Final Unfinished Voyage Of Jack Aubrey" I've been looking for books to fill the void left in my life when I finished the Aubrey/Maturin series. The Hornblower books are okay. I just finished one called "Kydd" by contemporary author Julien Stockwin and found it flat and dull.

Then I listened to "Percival Keene" by Frederick Marryat. While O'Brian combined naval life with the style of Jane Austen (he even gave his hero her initials), Marryat seemed to be combining naval action with Charles Dickens.

But a little research tells me that Marryat precedes Dickens. Marryat was actually a post captain in the Royal Navy around the time of Aubry and served under Lord Cochrane, the man Aubrey is patterned after.

Percival Keene is full of colorful characters and humor as well as action. William Sutherland, the book's narrator does a terrific job. It's definitely worth a listen. Marryat's books may even help fill the void left by finishing O'Brien's cannon.

As a Patrick O'Brian devotee and having been through the "Cannon" at least three times I relish books like this one that eventually gave rise to the HMS Surprise. Indeed, O'Bryan has acknowledged this, and much of Capt. Keene's adventure can be seen in Capt. Aubrey's although in a much abreviated way and without the wonderful bells and whistles of the O'Brian cast.

The rating is a five as a foundation work for all that is to come.

Writing period narratives about the sea requires knowledge, great characterization and a deft touch with understanding the time and place. You will happily find all within the gentle, clipped and distinctive narration of William Sutherland. The highly proper delivery carries all the hallmarks of military life and the early pranks of our heroes a light counterpoint to the ways of the sea, My only criticism is the romantic cleanliness of the overall tale for life in those time was bitter for those pressed into service. Percy lives a charmed life which makes the overall story a little Disney for this ardent procurer of maritime tales. That being said, it had humor, and the scent of powder, tar and briny enriched with a maritime vernacular which always reaches me. It could have been a 4 but for the cleanliness so do not let my score hold you back if you like tales from the sea.

This is a most entertaining novel. It’s full of adventure and humor. One darn thing after another… .

wonderful reading of a wonderful novel!

Love this Audio book have listened to at least 3 times. Will probably listen to it many more times. Loved reading this novel but is even more enjoyable listening to it. Love Mr. Sutherland's reading. The Reading of Peter Simple unfortunately not as good because that is my favorite Marryat novel.

I would not recommend the audible book to a friend because the story is simply read. The reader has a pleasant voice. But there is no differentiation between characters. He simply reads.

The reader had a pleasant voice and read well.

Was Percival Keene worth the listening time?

No. I will simply read the book myself next time.

Would you consider the audio edition of Percival Keene to be better than the print version?

Have not read the book. Certainly shall look for the book now.

What other book might you compare Percival Keene to and why?

Tobias Smollett - Roderick Random springs to mind.
Obvious why - seafaring books by seafaring men in the robust style of their century.

The timbor of his voice, and style and pace of his narration, perfectly matched my presumption of Hearts of Oak. Would strenously request Mr. Surherlands narration of Peregrine Pickle - perfect voice for Commodore Trunnion.

Yes - but a bit lengthy for one sitting.