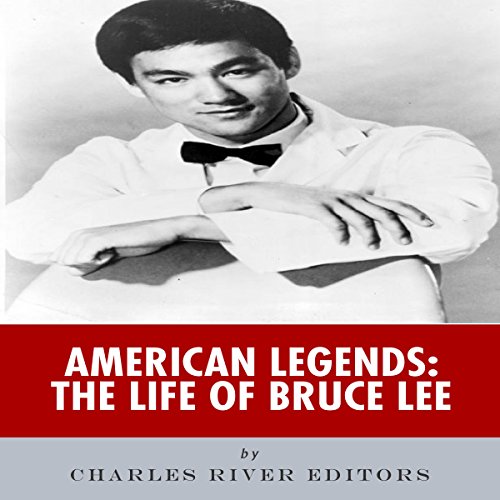 By: Charles River Editors
Narrated by: Cliff Truesdell
Try for £0.00

It would be nearly impossible for someone to pack more action into 32 years than Bruce Lee, whose name remains practically synonymous with martial arts excellence and kung-fu movies. He was undoubtedly the forerunner to martial arts stars who came in his wake, including Chuck Norris and Jackie Chan, a feat made all the more impressive by the fact that he grew up as a sickly child. His upbringing was simultaneously one of great privilege and hardship, which had a huge impact on his career down the road; even when he began to fill out his skinny frame, trouble on the streets created a whirlwind set of circumstances that all but required Lee to move to America before he was 20.

Despite being the most famous star of the genre and the man who almost singlehandedly popularized martial arts in the West, the films that helped make Lee a global icon were not even made in the United States but were instead shot and produced in Hong Kong, after which they received large-scale international distribution. Furthermore, for all of his fame, none of Bruce Lee's movies are commonly regarded as masterpieces, and they have always been viewed more as popular entertainment than as significant artistic achievements. Some might be able to name the short list of movies in which he starred and may know that Enter the Dragon (1973) is his most iconic picture, but his movies were never among those considered for Academy Award nominations.

Nonetheless, Bruce Lee has not been neglected by serious scholars of cinema, a fact that attests to the cultural significance of his films and his own star image. That Lee was able to become an international icon is all the more remarkable in light of the fact that he died suddenly and unexpectedly before the age of 33, leaving many to reasonably argue that he had yet to even reach the pinnacle of his career. As it was, the list of accomplishments speaks to his relentless work schedule and unparalleled drive.

Bruce Lee was arguably the greatest martial artist who ever lived, but he's also remembered today for being spiritual and philosophical. In addition to writing at length about those topics, Lee considered those elements essential to his physical fitness and training. In reference to a form of martial arts that came to bear his name, he explained, "Too much time is given to the development of skill and too little to the development of the individual for participation...[Jeet Kune Do] ultimately is not a matter of petty techniques but of highly developed spirituality and physique."

What listeners say about American Legends: The Life of Bruce Lee