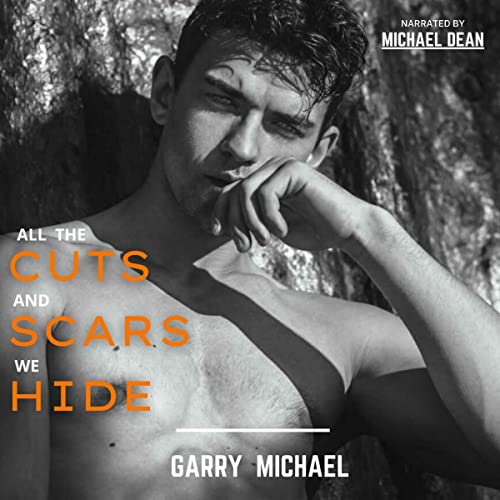 All the Cuts and Scars We Hide

By: Garry Michael
Narrated by: Michael Dean
Try for £0.00

Ex United States Marine, Wyatt Miller, was living a low-key life keeping those around him at arm’s length. Fearing that the shadow that had been haunting him for four years would swallow everything and everyone he touched, he commits to living a solitary life. Until one night when a beautiful stranger came to his rescue during one of the darkest points in his life.

Caught between his guilt and his love for his family, architect Kai Lobo left Hawaii in search of a fresh start and a new place to call home. What he didn’t expect was to meet a mysterious stranger that will change the course of his quest for a new beginning.

What will Wyatt do when the only man that can save him is the same person who will drive him over the edge?

What will Kai do when the only man who can free him is the same person that reminds him of a ghost from his past?

Will Wyatt and Kai be able to see past their differences and rely on what they have in common to alter their futures?

All The Cuts and Scars We Hide is a story about healing, redemption, and love.

What listeners say about All the Cuts and Scars We Hide

All the feels ❤️

This is my first time listening to a Garry Michael’s book and I’m quite impressed!

This story contains deeply serious topics like dealing and coping with PTSD, survivor’s guilt and anxiety. Garry managed to tell us a story full of hope, of overcoming adversities, big or small. It’s not based on an easily-obtained HEA. The main characters, Wyatt and Kai are deeply flawed. But their resilience, their fight to make life better and be better person, it’s what’s this story so good.

It’s all about hope, all about not giving up on people we love the most, all about forgiveness and moving forward. It’s also about family, not just by blood, but by choice and by heart.

I love that the HEA wasn’t tied up in a perfect bow, it’s a work in progress and life should be.

If you’re looking for a beautiful hurt/comfort, sunshine and grumpy, found family, marine & surfer, with a nod to Filipino Hawaiian culture, then this audiobook is for you.

Huge bonus: Michael Dean’s narration is on point, per usual. 👏🏼

I am confused by all the rave reviews and five stars. It’s a good story but it could have been great ! The topic has such great potential, I recognize that difficult topics don’t have to be full of angst and drama but I truly felt like the author used PTSD and Kai’s trauma simply to push the romance along when it should have been THE story.
It was sweet and and had some very steamy scenes … the narrator is fantastic !

Garry Michael writes a beautiful story of wounded and vulnerable characters and the deep love Wyatt and Kai found with each other. It is a very emotive story and heartbreaking when we discover how damaged Wyatt is with his PTSD, which was written and handled sensitively. His pain and despair was palpable.

Kai is the sunshine to Wyatt’s despair and a beautiful soul but he was also hiding painful secrets. They become the perfect match for each other but they have to hit rock bottom before the healing process can begin.

I loved this book and listening to the story on audible brought it to life. This authors writing is very descriptive and listening to Michael Dean’s voice reading his words made it that much more … just more!

Wow! Definitely the author keeps getting better. All the Cuts and Scars We Hide has an amazing story for us. Kai and Wyatt are spectacular together! The romance is so beautiful and intense. The emotions are powerful, I cried, I laughed and I fall in love with them.

The quality of this audiobook is amazing. The performance spectacular. Great job!!!

What an amazing story!

What a roller coaster of emotions and I would do it all over again for sure. This book has it all. Romance. Steam. Emotion. HEA! Highly recommended.

This is a reread for me except the first time was in ebook format. The narrator Michael Dean did an excellent job at giving me all the feels as if it was my first time reading the story. This along with the author's adept way of making you feel all the characters emotions had me fully immersed in the story for a second time.

Wyatt and Kai's story is about overcoming and/or learning to deal with past traumas, second chances, and finding that one person that feels like home to you no matter where you are.

If you haven't read this book yet, I highly recommend! You not only get the deep subject of the storyline about ptsd/trauma but also the beauty of falling in love, sharing adventures, and wonderful characters that will make your heart full!! Easily a 5 star read!!

Wyatt and Kai are both people who hide their scars, grappling with their pasts and the guilt they feel. They find each other and their attraction is instant. The way they let down their guard with each other is inspiring. A great character driven story that teaches us that the gift of forgiveness, the power of love and the support of friendship can help us heal. This spicy M/M romance hits the right spot with a great plot and all the feels that hit the right spot.
Can't wait to see what Garry Michael will bring us next!

All The Cuts And Scars We Hide is book 1 in the From The Ashes series by Garry Michael. Micheal Dean narrates the audiobook. It was my first story by this author and my first audiobook by this narrator.

I don't read much mmromance, this is my second this year, but it did not disappoint!

Garry Micheal wrote a heartbreaking story filled with angst, love, romance, and steam.
I enjoyed his writing style, it was so easy to listen to.
I love that we got to see this couple grow towards each other by spending time. The story was fast-paced but didn't skip anything. I felt like I got the complete story, there aren't loose threads.
The characters are well developed, they feel like real people, and there is so much character progress. I loved both characters, they were so different, a broody ex-veteran and a swoony Hawaiian architect, but their love was like no other.
Garry Michael portrayed PTSD very correct and realistic. I loved that he shows that people who aren't soldiers/ veterans can suffer from it too.
Never in my life, I thought I would enjoy listening to two men going at it. I was so wrong!! The scene's well built, descriptive, and just all-around hot!

The narration by Michael Dean made this story even better. Michael Dean has a sexy low voice that reminds me of my favorite narrator Joe Arden. Every emotion was audible in his voice, and it felt like he was completely into the story.

I strongly recommend listening to this beautiful, emotional story about healing and allowing yourself to heal, love, and forgive.

I received an ALC from the author but am voluntarily leaving my honest review.