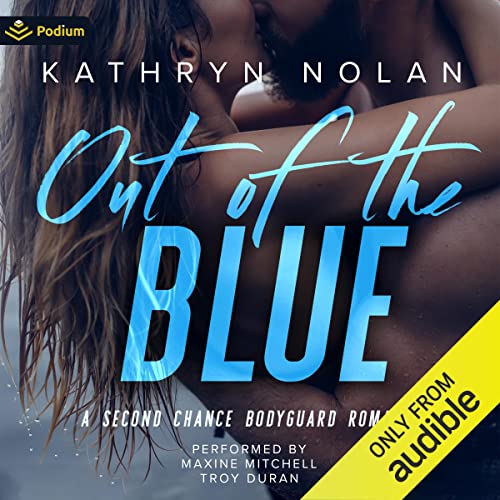 Out of the Blue

By: Kathryn Nolan
Narrated by: Maxine Mitchell,Troy Duran
Try for £0.00

There was no way I could protect her and my heart at the same time.

Cope McDaniels is known for two things: His cocky charm and his sterling reputation for keeping high-profile clients safe...until a security job goes bad, and he suddenly finds his career on thin ice. Cope’s newest assignment comes with serious consequences; he’ll keep his job as long as he makes no mistakes. Cope isn’t worried, until his new client turns out to be a beautiful blast from his past.

Big wave surfer Serena Swift loves the adrenaline of her sport. And the elite athlete hates being told what to do. That goes double when the orders are coming from the sexy bodyguard-in-a-suit who broke her heart. But she doesn’t have a choice when a mysterious threat materializes and Serena’s sponsor saddles her with the last man she’d want guarding her body. She’d rather focus on her next surf competition, not on some shadowy danger or the arrogant ex who dared to get even hotter since their breakup.

Cope can’t stop butting heads with his new client. Just like old times, Serena refuses to play it safe, even when it’s clear she’s in peril. Now the intimacy of spending every second of the day by her side is wearing away at his self-control. He can’t afford to lose focus, but everything about the woman is a constant distraction. Including the fact that their divorce was never finalized....

What listeners say about Out of the Blue

New to me author. This may be an unpopular opinion, but I never enjoy books quite as much when I feel like an author is using their books as a platform to vent their soap boxes. Heavy emphasis on climate/social injustices (especially sexism)…it’s not that I don’t agree with the sentiment, I absolutely do…but reading is my happy place/escape and I prefer not to have those topics so heavily mixed in. It takes away from the romance element when it becomes such a large part of the book. Also, I thought it very odd that this couple didn’t get divorced after 4 years of estrangement. And the way they ended things (1st time) was bizarre. When the story picks up in the present, the h made a point to continually mention the H as her ex-husband when he was not. And then there was a switch flipped, and “I never stopped loving you, I sleep in your old shirt every night, etc.” Honestly, this felt more like a story of physical connection than a true multi-level romantic connection (even the flashbacks to their previous time together were snippets of sexual encounters). Other than these points, decent overall plot and great narration. 3 star story, 5 star narration that definitely enhanced the read, and 4 stars overall.

Awwww love, laughs, and even a few tears

Loved this story, and the narrators killed it! The female narrator did read some in third person while male did not but that was easily ignored.. there was some action, sporting, lots of love and definitely steamy, and toss in a little suspense. Definitely worth the credit

Loved the plot.
Loved the steam.
Loved the Enemies to Lovers
And
Second Chance Romance.
Great narration too.

And it was stellar! So good, a great story, not too angsty(it could have taken that turn and been just as good), with a strong badass heroine and Maxine Mitchell was a winner! Troy Duran just keeps proving himself as a total favorite.