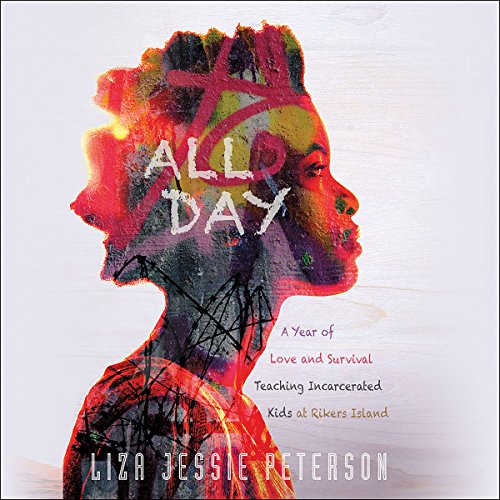 All Day is a behind-the-bars, personal glimpse into the issue of mass incarceration via an unpredictable, insightful, and ultimately hopeful reflection on teaching teens while they await sentencing.

Told with equal parts raw honesty and unbridled compassion, All Day recounts a year in Liza Jessie Peterson's classroom at Island Academy, the high school for inmates detained at New York City's Rikers Island. A poet and an actress who had done occasional workshops at the correctional facility, Peterson was ill prepared for a full-time stint teaching in the GED program for the incarcerated youths. For the first time faced with full days teaching the rambunctious, hyper, and fragile adolescent inmates, "Ms. P" comes to understand the essence of her predominantly black and Latino students as she attempts not only to educate them but to instill them with a sense of self-worth long stripped from their lives.

"I have quite a spirited group of drama kings, court jesters, flyboy gangsters, tricksters, and wannabe pimps all in my charge, all up in my face, to educate," Peterson discovers. "Corralling this motley crew of bad-news bears to do any lesson is like running boot camp for hyperactive gremlins. I have to be consistent, alert, firm, witty, fearless, and demanding, and, most important, I have to have strong command of the subject I'm teaching." Discipline is always a challenge, with the students spouting street-infused backtalk and often bouncing off the walls with pent-up testosterone. Peterson learns quickly that she must keep the upper hand - set the rules and enforce them with rigor, even when her sympathetic heart starts to waver.

Despite their relentless bravura and antics - and in part because of it - Peterson becomes a fierce advocate for her students. She works to instill the young men, mostly black, with a sense of pride about their history and culture, from their African roots to Langston Hughes and Malcolm X. She encourages them to explore and express their true feelings by writing their own poems and essays. When the boys push her buttons (on an almost daily basis), she pushes back, demanding that they not only meet her expectations or the standards of the curriculum but set expectations for themselves - something most of them have never before been asked to do. She witnesses some amazing successes as some of the boys come into their own under her tutelage.

Peterson vividly captures the prison milieu and the exuberance of the kids who have been handed a raw deal by society and have become lost within the system. Her time in the classroom teaches her something, too - that these boys want to be rescued. They want normalcy and love and opportunity.

What listeners say about All Day

Different perspective on the Mass incarceration system aka prison industrial-complex

LJP gives an amazing insight into how schooling is intertwined with mass incarceration. Gives you much to ponder upon. These kids aren't inherently bad, but there is an unstoppable force of a capitalist system steeped in racism that wants to paint them that way. LJP gives her insight but also thoughts on change so that we, those with some sense of consciousness and aren't driven in life to serve money, can become the immovable object to shield future generations from being trapped in this depressing cycle.
Hopefully with the rise in awareness of BLM, white people can become more aware of the underlying system that suppresses the rest to keep them in comfort. LJP highlights just that.

Much respect to LJP. If I do come back to USA, I'll be sure to go see her play The Peculiar Patriot!

Would you consider the audio edition of All Day to be better than the print version?

Absolutely, because it adds the AUTHORity of Lisa Jessie Peterson's voice.

Her amazing imagination in service of her charges.

What about Liza Jessie Peterson’s performance did you like?

Her own enjoyment of it. This is not a report so much as it is a living prophecy. She's not the kind of prophet who foretells the future, but the more important kind, one who cogently articulates 'jedgment, jedgment'

Dozens of such moments! But since you want 'a' singular one: when she arrives for a work day and finds everyone quiet and knows something ominous has caused it. Or when she rails about the blind authoritarianism of a new principal

•All Day• intimately connects us to the hearts and souls of talented children whom we have thrown away through our criminal injustice system.

Peterson did not just investigate. She did time herself —16 years in fact — as a loving teacher of those whom society considers the least among us. Her boundless imagination and courage inspire me. Her sass and candor heal.

I love this book, especially her reading of it on Audible.com.

Not only is this book amazing but the author is as well. What an incredible reality check. I highly recommend this book at all school teachers.

I read this book initially because my favorite professor recommended it, but after the first 2 pages I was hooked. Being in the mental health field and being an advocate for children, this book spoke volumes to me. We already know the systematic racism and the alarming rates at which BIPOC boys are arrested and locked up compared to their counter parts. However this book highlighted it more in an intimate way. Liza Peterson broke down what it was like as an artist subbing at Rikers Island then taking on the job full time teaching the GED program. She spoke about the boys trumped up charges and how they were treated. How she nurtured them, gave them structure, hope and let them know they are somebody. Liza used her raw honesty and compassion and developed a bond. She instilled in them a sense of self-worth that was stolen from their lives. Peterson reminded me a lot of myself. I too,love the kids, and are always teaching them about our rich history and culture (my boys could tell you a bunch). I encourage everyone to explore and exotess their true feelings and how valid your feelings are. Peterson vividly depicts the prison climate and the energy of the boys who have been handed a raw deal by society which who have become pawns in the system, meant to destroy them. Whew.......Now that I have read this book, I recommended it to anyone who has troubled youth and highschoolers. Just because they got derailed doesn't mean they are bad. One bad mistake doesn't define you, what you do with another chance says a bunch. I beg off everyone, don't count them out. They still want to be rescued, they want normalcy, love, and opportunity.Be there for them, they'll never stop needed you, guidance and structure until we leave these borrowed vessels. #Book31of2022 #Bookworm #Whatsnext

This book had me angered, frustrated and laughing hysterically. It is a powerful, eye opening, engaging and informative book, highly recommended for all shades of Americans!

I thoroughly enjoyed this book written by a master storyteller, gritty, truthful, and absolutely inner-a-taining!

Through her words, I was transformed into her classroom and privileged to have her light a path to my victory!

This is an amazing, inspirational book.

INSPIRATIONAL, EMPOWERING, PASSIONATELY
WRITTEN. The author narrative is real, dramatic.
Made me feel like I was in the classroom and could envision everything.. I personally believe that this book should be read by every teacher,
especially in the inner City schools, grades 6th through 12th.
If there were more teachers with the fire and passion, that this author shared with her kids, there would be less children going to jail.
She help these kids understand that they should be proud of their heritage, know that they are intelligent, and can do anything, if they put their best efforts into it. I loved this book and recommend reading it.
I'm going to start the book again, right after I finish with this.